Finley and Henderson: Forging friendships across the political divide

Friendships can forge across the political divided. Finley, Henderson are leading Detroit Regional chamber's Civility Project to prove it.

Finley and Henderson: Forging friendships across the political divide 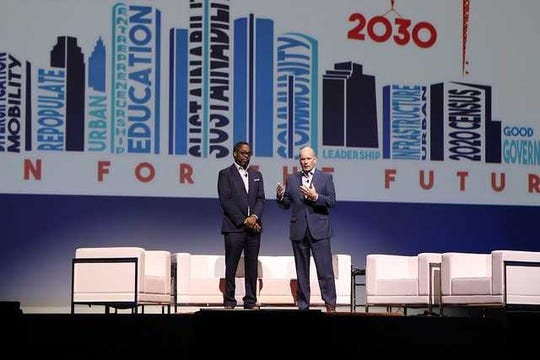 But despite our firmly opposite takes on politics and policy in America, we are fast friends, and have been for more than a decade.

Sometimes, that confounds people. And it has angered some, who seem to feel betrayed in this world of political bunkers. How could it be? A committed conservative, and a passionate progressive? Friends?

It’s not always easy. We do argue — sometimes loudly, and always with the pride and certainty of our beliefs.

But we do something else, too, something really important.

We listen. We really listen to each other when we’re debating or arguing. We listen to hear, and to genuinely understand, where the other guy is coming from — not just to figure out what we might want to say back.

And that exercise in listening is the essential element in building and maintaining civil personal relationships with those with whom you disagree.

Before you can get to that point, though, you have to get to know each other. You have to make the effort to understand the experiences and values that shape another person's outlook.

That's the objective of the Detroit Regional Chamber's Civility Project, which the two of us are hosting.

"Detroit can and should be a model of civility for our nation," says Sandy Baruah, CEO of the chamber.

And by civility here, we mean something specific. We’d never suggest that people not push back when they face systematic violation of their rights or humanity. We’re not proposing the idea of disarming in necessary fights for justice.

We’re talking about how we deal, one-on-one, with someone who comes honestly to a different set of conclusions about politics, policy and the world. This is about how we talk to each other. It’s about how we respect those right in our own community who don’t think the way we do.

Between now and the Mackinac Policy Conference in late May, we are inviting those who hold opposing political views to sit down one-on-one to establish the foundation for civil discourse.

Before they get to the things that separate them, we want them to first explore what they may have in common. To get to know each other as individuals apart from their politics.

Ideally, those willing to engage will discover that it's possible to debate without anger, and without hate. That's the first step toward problem-solving, which has to be possible without one side vanquishing the other, or even without reaching capitulated consensus.

Some of the sessions will be videotaped, and we'll invite a few of the participants to share their experiences on Mackinac.

The idea grew out of a session we did two years ago for National Public Radio's Story Corps project.

We sat down in a mobile recording studio, just the two of us, and talked for an hour or so about our upbringings, the people who influenced us, the significant events that helped shape the way we process facts on our way to forming an opinion.

We each started life in very modest households that teetered on the edge of poverty. Our common path upward was education, hard work and a healthy fear of the wolf at the door.

Both of our families came to Detroit from the rural south, lured by automotive jobs.

Steve’s family became deeply involved in the union and civil rights movements, rising through the ranks of the UAW and eventually Detroit’s political structure. That informs his belief that the institutions of society, when challenged and held accountable, are the best hope for creating fair and equitable communities.

Nolan's roots are in Kentucky's Appalachian foothills, populated by fiercely independent people whose distrust of government is a cultural touchstone and who earn everything they have with muscle and sweat. That shaped his belief in self-reliance and the virtue of free markets.

The more we learned about each other, the better we understood what made one of us a conservative, and the other a progressive.

We also came to the important realization that two people can look at the same set of facts, apply their individual experiences and values, and come up with different opinions. And that doesn't make either one evil or ignorant.

Though we may advocate different solutions, the outcomes we want for our community are mostly the same.

We have learned to have intense discussions without trying to convert each other. We gave up a long time ago on any hope we'd bring the other to an epiphany. We're always going to disagree. And that's OK.

In the process, though, we learn things, and often consider perspectives we might not have been exposed to otherwise. It's useful to challenge our own positions. It keeps us from getting too comfortable, too smug.

Most important, we've learned friends don't have to be ideological carbon copies. There's more to us than just our politics.

There's bourbon, for one.

For us, it's always a good conversation starter.

Nolan Finley is editorial page editor of The Detroit News and the morning host on 910AM Superstation.