"The Democratic-controlled House should either impeach President Donald Trump or stop yapping about it. " 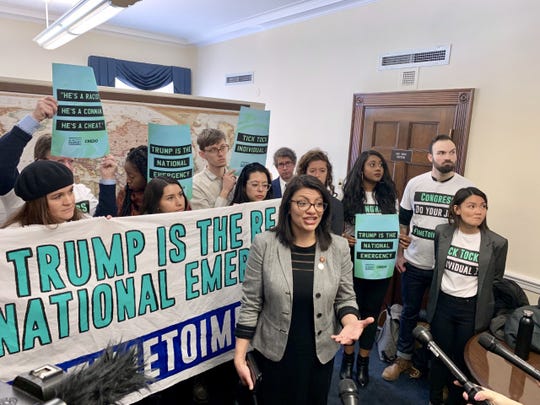 The Democratic-controlled House should either impeach President Donald Trump or stop yapping about it.

The faux impeachment proceedings underway in multiple House committees serve no purpose other than to keep the administration on defense and under a cloud of suspicion going into the 2020 presidential race.

Democrats want to reap the political benefits of an impeachment without having to take the risk of actually introducing articles and publicly debating their merits.

They know a majority of Americans, including many who oppose him, don't want to impeach the president, preferring to wait to decide his fate in next year' election. The mood of the country on impeachment is reflected by that of House members; just 60 of the 435 representatives publicly support formal proceedings against Trump.

Yet the theater continues in Washington. Administration officials are being hauled before committees not to enlighten the Congress, put to give Democratic members an opportunity to grandstand before the cameras.

The facts were already assembled for them by Special Prosecutor Robert Mueller, who didn't recommend criminal charges against Trump, but seems to hint he would have if he could have.

The president is right in accusing Democrats of seeking a do-over. They hope the same set of facts will lead to a different conclusion.

They also bet the constant retelling of Mueller's findings in House committee rooms will sway public opinion in favor of impeachment, or at least further marginalize the president and doom his chances for reelection.

Determination to find dirt on Trump extends beyond Russian collusion and obstruction of justice. Fourteen House committees have more than 80 investigations of the administration underway. It is an investigatory frenzy that has displaced nearly all other business in Congress.

Democrats need no more information than they already have to impeach Trump. Impeachment is a political, not a legal proceeding. They can take the Mueller report, if they wanted to, and make the case to their House majority that the president is not fit to remain in the White House.

But that would put the onus of impeachment, and the disruption it would cause, on them.

They hoped Mueller would provide the justification for an outcome they've been pining for since the day Trump was inaugurated.

They've got the report, but they don't have the guts to act.  So they should move on. Let the Mueller report stand for what it is: an ambiguous document that neither fully exonerates nor fully damns Donald Trump.

Accept that reality and finally get down to tackling the serious issues facing this country that are being neglected while Democrats engage in this self-serving sideshow.