Finley: What do black voters want?

"Pandering is not necessary. Today's concerns are universal."

Finley: What do black voters want?

If the Democratic presidential candidates who will be swarming all over Detroit the next two weeks are asking “What do black voters want?,” they’re coming here with the wrong question.

“We want the same thing everyone else wants,” says the Rev. Wendell Anthony, pastor of Detroit’s Fellowship Chapel and national board member of the NAACP, which is holding its convention in Detroit this week. “One of the basic issues for everybody in America, black or white, is health care. We want safety. We want jobs. We aren’t looking for pie in the sky. We want basic stuff. 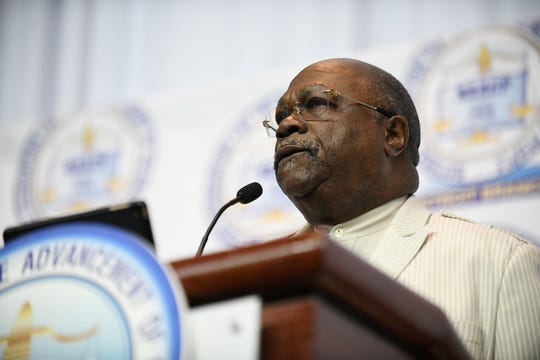 “The thing that impressed me when Bill Clinton ran for president is that he gave the same speech about one America in Detroit as he did in Macomb County. He said the same thing to black folks as he did to white folks.”

In other words, pandering is not necessary. Today's concerns are universal.

“First is job growth," says businessman Brandon Brice, an African American conservative. "Even though I don’t like (Donald Trump’s) rhetoric, the economy is doing better for blacks. That’s a fact. Also, education reform. We’re not talking enough about the sort of education it will take to succeed in the 21st century.”

If there’s one issue that may carry more appeal to blacks than other groups, Brice says, it’s criminal justice reform.

Portia Roberson agrees. The chief executive of Focus: HOPE and former civil rights director for the city of Detroit says the mass incarceration of African Americans that followed passage of the crime bill during Clinton’s presidency remains a uniquely raw issue with African Americans.

“That sent more people of color to prison than it did Caucasians,” she says.

Still, Roberson says, black Democrats will go to the polls carrying the same concerns as their white peers.

“Not just black voters, but across the board voters are looking for progressive ideas that can help all of us,” she says. "We have to stop thinking that the issues are so different based on color and race. They really aren’t. Macomb County voters want to know they have an opportunity for jobs and an education for their children. African Americans want the same thing.”

One issue the predominately white field of Democratic contenders may feel compelled to tout is reparations for slavery.

Brice says if reparations become a subject of the Democratic debates next week in Detroit, the nuance is important.

“The discussion should be beyond just cutting a check,” he says. “Reparations need to go into a full investment for black people for education, for business grants. Make it more of a package deal that helps people move forward, rather than a check. A check is the easy way out.”

Or don’t talk about it at all, says Roberson.

“Do you have to talk about it in Detroit? I don’t think so,” she says. “That’s not the kind of topic that is going to drive African Americans to the polls, or decide who will get their vote.”

The issue that will motivate African Americans and all other Democrats on Election Days, says Anthony, is defeating Trump.

“I want somebody who can win, I don’t give a damn who it is.”