Finley: Whether in Dayton or Detroit, shooting victims 'are our children'

But for the grace of God and poor aim, Detroit would have joined the list of American cities that suffered mass shootings on Aug. 3

Finley: Whether in Dayton or Detroit, shooting victims 'are our children'

But for the grace of God and poor aim, Detroit would have joined the list of American cities that suffered mass shootings on Aug. 3. 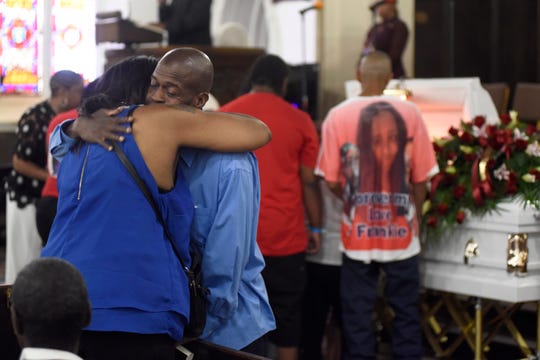 While the bodies were falling in El Paso and Dayton, the would-be targets of as many as three shooters in Rouge Park that Saturday got lucky — they escaped with their lives.

Francesca Marks, 30, who went by Frankie, had come to the park on Detroit's west side with her seven children, five nieces and nephews, and two younger sisters to barbecue and relax while the kids played.

"They were going to have fun, to run and play," says her mother, Sherri Scott.

But then bullets started flying. A pick-up basketball game that staked a pair of gym shoes as the bet got ugly. The loser stormed angrily off the court and out of the park. 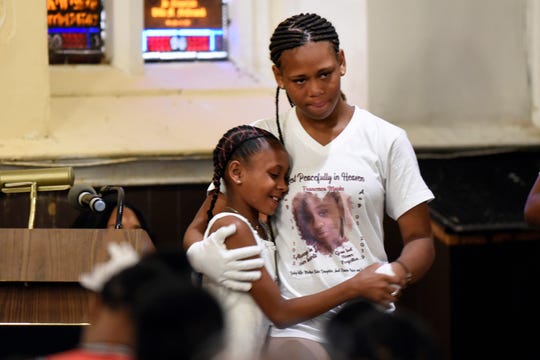 Family members of Francesca Marks hug each other after sharing memories with the congregation. (Photo: Jose Juarez, Special to Detroit News)

When he returned a few minutes later, he had a gun and two buddies, who also were armed. Family members say one had an assault rifle, though Detroit police can't confirm that. Police did say multiple shots were fired.

"There were people all over having picnics and family reunions," says Bianca Jackson, Frankie's sister. "They just started walking toward us and shooting. One of them was swinging his gun from side to side shooting. So many could have been killed."

But only Frankie, who was trying to shield her kids, was slain, though another person in the park was wounded. Frankie was hit in the upper chest and died while her sister was performing CPR, with some of her children still clinging to her. The gunmen remain at large.

Francesca "Frankie" Marks, 30, was at Rouge Park with her family when the bullets started flying. (Photo: Family photo)

The national media blared non-stop reports from El Paso and Dayton that weekend. Politicians and activists of all sorts stood and demanded something be done to end mass shootings. The victims of the attacks were profiled and publicly mourned.

But the horror of Frankie's death received scant notice, beyond a few words on local news reports. Maybe it's because lone slayings don't move us anymore, even when the victim is a mother of seven young children. Or maybe it's because Frankie was poor and black and died in a city where hardly a day goes by without someone poor and black being murdered. It's a rolling mass shooting that never ends for city residents.

"We've got 300 regular members, and every single one of them knows at least one person who has been murdered," says Barry Randolph, pastor of the Church of the Messiah in Detroit's Island View neighborhood, where Frankie attended and recently marched in an anti-killing parade.

"Violence impacts every single person in our community. We've got to get a hold of this issue."

I sat down with Frankie's family and the Rev. Randolph in a special room of the church set aside to honor murder victims. Their photographs hang from the walls and form a collage of the faces of Detroit. Men, women. Old, young. Black, white.

What Randolph hopes to convey is that gun violence kills more than its victims. It strangles a community.

Randolph chafes when the dialogue after a massacre turns toward gun laws, instead of the root causes of violence. 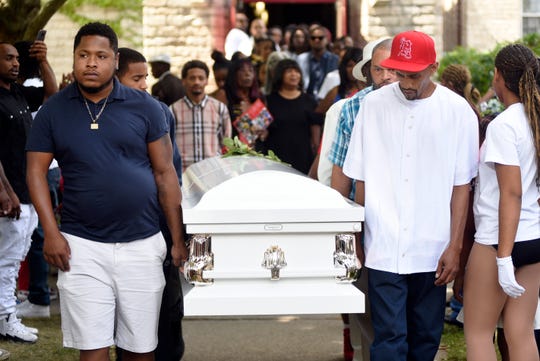 "This happens here everyday. This is not normal."

A go-to piece of mass shooting coverage is the advice story on how to talk to children about what they're seeing on television.

In the city, kids too often are firsthand witnesses to the bloodshed.

"Think about what it does to children," Randolph says. "These kids saw it in real life. The psychological effect of that will follow them the rest of their lives."

Frankie's children range in age from 2 months to 12 years. The family worries the younger children will grow up without any memory of their mother, who was a hospital housekeeper.

"My baby wakes me up every morning asking, 'When's mommy coming home,'" says Kevin Lowery, father of Frankie's children. "I worry about the oldest, too. He saw his mama get shot."

After the funeral for Francesca Marks, a drum line and dance team performed on the street outside the church. (Photo: Jose Juarez, Special to Detroit News)

Perhaps the mass shootings raise such awareness because their random nature makes us realize that any of us could be a victim, anywhere, while we feel isolated from the violence in the city. Don't kid yourself.

"This is the reality — it affects all of us," Randolph says. "It doesn't matter which side of Eight Mile or Alter Road you live on. We've got to get at the issues with the guns. We have to stamp out the violent mindset and replace evil with good.

"These are our children."