"The last thing they want is for a potential customer for their bars and restaurants to stop in for a drink or dinner at an establishment they don't own."

Last week I attended a dinner at Amnesia, the fine restaurant/lounge atop the Ilitch-owned MotorCity Casino.

The floor-to-ceiling windows offer one of the more magnificent views of the Detroit skyline, and of the Detroit River as it winds its way toward Lake Erie. In the distance, the the city is gorgeous, its revival on full display. 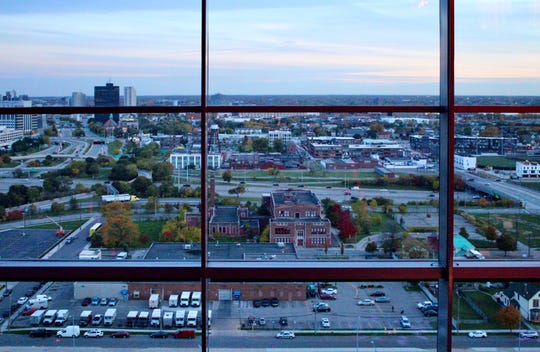 Look downward, however, and everything changes. The casino-hotel is surrounded by a dead zone of vacant lots, empty businesses and homes in need of rehab or demolition.

It's a typical Ilitch landscape.

A recent report by Louis Aguilar of The Detroit News revealed the Ilitch organization, owners of the Detroit Red Wings, Tigers, Little Caesars and Olympia Development, controls 52 unused properties around the MotorCity complex.

It explains why the casino has never been the economic engine for the neighborhood northwest of downtown that Detroiters were promised when they approved legalized gaming in 1996.

The properties adjacent to MotorCity are among 147 idle sites in the Ilitch portfolio in and around downtown.

As previously reported, many of them form The District Detroit, which includes the new Little Caesars Arena and a network of 26 parking lots that the organization had promised would house five cool new neighborhoods of condos, apartments, restaurants and stores.

Despite months of criticism for not living up to their commitment, the Ilitches have still not produced a viable explanation for why such a desirable area of downtown got parking lots instead of homes and commerce.

But look at the empty land encircling both Little Caesars Arena and MotorCity and a probable strategy emerges.

It's easy to conclude the Ilitches don't want to develop that land themselves, or allow others to, because rising new neighborhoods with bars, restaurants and commercial space not owned and operated by them would compete with their casino and arena.

The last thing they want is for a potential customer for their bars and restaurants to stop in for a drink or dinner at an establishment they don't own.

MotorCity casino/hotel was sited and designed in much the same way as the abandoned Joe Louis Arena, former home of the Red Wings, to allow visitors to drive into Detroit, get off the freeway, pull into a parking garage and enter the arena without ever setting foot on actual Detroit ground.

That maximized the likelihood that every dollar brought into the city by a hockey fan ended up in the Ilitches' pockets.

Like MotorCity, The Joe, walled off by concrete garages and ramps, never became a catalyst for spin-off development. Little Caesars arena, though much better situated in the downtown core, won't either.

It's a lesson for dealing with future grand projects that promise an economic multiplier in exchange for taxpayer subsidies. There's a good chance it won't happen if the owner also controls the land around the development. The owner has no incentive to allow anyone else to make a buck.

I'm confident that if it and I are still standing in 20 years, my view straight out of the Amnesia club's windows will be even more stunning, while the view straight down won't have changed a bit.

Catch Nolan Finley on One Detroit at 7:30 p.m. Thursdays on Detroit Public Television.