It benefits both prisoners and society that the days, months or years behind bars work to make the offender a better person

Craig DeRoche views the effort to reform the criminal justice system as a balance between retribution and redemption.

Criminals must pay for their crimes, and that may require some of them to spend time locked up. But it benefits both prisoners and society that the days, months or years behind bars work to make the offender a better person.

DeRoche, the former Republican speaker of the Michigan House, saw his own political career ruined a decade ago by two drunken driving arrests. So he's been on both sides of the criminal justice reform debate.

"When you're talking about politicians who have pressure on them for the decisions they make, I was one of those people," says DeRoche, now senior vice president of Prison Fellowship. "I was also someone who had an addiction, broke the laws of the state of Michigan, violated my probation and had to be held accountable for that. You should hold people accountable for what they do. That’s justice.

"But what we’ve seen in the jail system is accountability is ... not geared toward success. It’s not taking someone from a behavior that is a hazard to our community and moving them to a crime-free lifestyle."

That's a primary goal of the Michigan Joint Task Force on Jail and Pretrial Incarceration, on which DeRoche served along with other policymakers, law enforcement officials and reform advocates.

The task force released its 18 recommendations this week, and all are geared toward making Michigan's jails more efficient and more empty.

Working with data compiled and analysed by the Pew Charitable Trust, the task force set out to determine who is in Michigan's jails, and why. What they found may surprise you.

"A high number of people who have not paid court costs, fines and fees for traffic offenses are spending time in our jails," says Bridget McCormack, chief justice of the state Supreme Court, who co-chaired the task force with Lt. Gov. Garlin Gilchrist II. 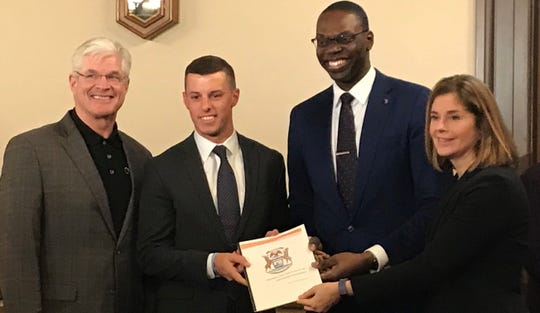 "There are a lot of offenses in Michigan that have nothing to do with driving for which a license suspension is a penalty. If you forget to pay a ticket, the state suspends your license automatically, and if you get pulled over the next week, you're going to jail."

Other low-level offenders sit in jail for weeks or months because they are denied bond, or are too poor to post the bail that was set.

The task force recommends, among other things, decoupling licenses suspensions from non-driving offenses and replacing cash bail with personal recognizance bonds for those who are not a danger to the community.

"We want to make sure the only people held before their trial are those who truly pose a risk to public safety," says McCormack, who adds that cash bonds are no more effective in assuring a defendant's return to court.

"The most likely thing to determine whether someone comes back to court is if you send them a text reminder, like your dentist does. Most people don’t want to be running from the law."

The recommendations also address the challenge of jails serving as de facto mental institutions. One-third of Michigan jail inmates are seriously mentally ill, and up to 80 percent have some mental issues.

"If we can give police officers more discretion when they arrest someone with mental health issues to to decide if they’d be better off in a place other than jail where those ailments can be treated, it would be a big step forward," McCormack says.

Jail reforms have in the past faced pushback from police and prosecutors who worried backing such measures would hurt them at election time. But all of the law enforcement members of the task force backed the recommendations, with the exception of Attorney General Dana Nessel, who abstained.

The perception that keeping people out of jail is being soft on crime is wrong-headed, says DeRoche.

The report also recommends a number of support programs for defendants as they move through the criminal justice system, all aimed at addressing the behaviors that led to their crimes.

It will be costly, but so is the current jail system.

"What we pay in Michigan is enormous for a system that does not deliver good results," DeRoche says. "It's expensive up front, but it reduces the size and scope of government in other ways."

Michigan has warehouses full of dust-covered reports on how to make government work better for its citizens.

This one should not go on the shelf. It's headed to the Legislature, where it already enjoys the strong backing of House Speaker Lee Chatfield, R-Levering, and Senate Majority Leader Mike Shirkey, R-Clarklake.

Lawmakers should pass the recommendations as a unit, rather than select from the menu.

Catch Nolan Finley on “One Detroit” at 7:30 p.m. Thursdays on Detroit Public Television.