Biden has the experience to navigate difficult decisions and the ability to rise above partisanship to do what's best for the American people, the Editorial Board says

Democratic voters consistently tell pollsters their priority in the presidential primaries is nominating a candidate who can beat President Donald Trump this fall. Of the contenders who remain in the race heading into Tuesday's Michigan balloting, Joe Biden best meets that criteria.

In fact, the former vice president may be the only one who can fulfill the Democratic desire to deny Trump a second term.

The other front-runner, Vermont Sen. Bernie Sanders, is too far to the left to pull together the coalition of Democrats, moderate Republicans and independents necessary to win the White House. Massachusetts Sen. Elizabeth Warren is only slightly less radical, preaching the need for massive structural change. 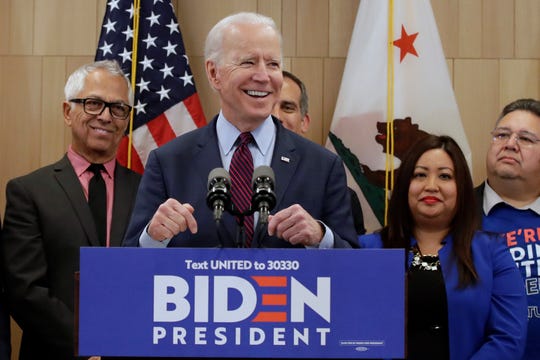 Americans are looking for steady respectable leadership, not a revolution.

In a head-to-head match-up, the electorate may decide protecting the nation's foundational principles from the progressive mob is more important than ending Trump's chaotic and divisive tenure.

Biden, on the other hand, is an institutionalist who recognizes the fundamentals of America are sound; they've just been undermined by weak and self-interested leaders. In a flawed Democratic field, he offers the best hope for working within the existing structure to right the things that are wrong in America. And to do so without blowing up a robust economy.

Read more from the Detroit News Editorial Board

One of the country's major challenges is the ever-growing political divide. The inability of those in Washington to work across party lines and the increasing incivility in the public square are the biggest threats to the nation's well-being.

We can't continue to allow partisanship to be the primary consideration in policy-making. Nor can we keep screaming at each other without listening. Democrats and Republicans, both in office and out,  must find common ground to tackle the urgent challenges facing us. Gridlock and gotcha politics are not serving us well.

Biden, as a U.S. senator and vice president, has a reputation as someone who could build consensus. His former boss, President Barack Obama, called on him often to knit the two parties together on important matters.

On the campaign trail, Biden has given cause to worry that he's backslid on centrism to pander to the party's inflexible progressive wing, most notably this week when he promised failed presidential hopeful and anti-gun zealot Beto O'Rourke he could be his gun czar. Hopefully, he'll find his way back to the middle once the general election campaign begins.

There is also reason to worry about Biden's fitness. He's 77, and at times his mental faculties have shown signs of his age. But all of the remaining major Democratic candidates, as well as Trump, are septuagenarians. Sanders had a mild heart attack while on the campaign trail.

Further recommending Biden is his White House experience. He served eight years under Obama, and was involved in many of the major decisions, for better or worse, made by the administration. Neither Sanders nor Warren have ever served in an executive role.

This election is unfolding in a period of great uncertainty. No one knows how much damage the coronavirus is going to do to the nation's health and economy.

Biden has the experience to navigate difficult decisions necessary to confront the crisis, and the ability to rise above partisanship to do what's best for the American people.

Michigan Democrats should give Joe Biden their votes on Tuesday.

Endorsements are determined independently by The Detroit News Editorial Board and have no influence on news coverage.