Finley: UM regent, donor Ron Weiser says he was molested by doctor, too

UM is committed to transparency in investigating Anderson, said Weiser, who will not recuse himself from decisions in the case

Finley: UM regent, donor Ron Weiser says he was molested by doctor, too

Ron Weiser, the Chair of the Board of Regents for the University of Michigan, says that while a student he was also a victim of Dr. Robert Anderson The Detroit News

Add another name to the growing list of accusers of Dr. Robert Anderson, the late University of Michigan sports physician: Ron Weiser, chairman of the UM Board of Regents.

Weiser, 75, said in an exclusive interview that he, too, experienced abuse at the hands of the doctor while a university student from 1963-67, joining dozens of others who have raised such accusations.

"As an individual who loves this university, as the chair of the Board of Regents and one of the university's largest donors, I know that there is only one way that we can truly understand what happened and how to make certain it never happens again," Weiser said, reading from a statement at the start of the interview in his downtown Ann Arbor office. "We must encourage survivors to come forward and tell their story, and protect their privacy.

"Part of that story is that I am a survivor, and I experienced abuse by Dr. Anderson."

Weiser said he met with investigators in recent weeks and decided to come forward publicly in hopes it will open the door for others to make the difficult decision to reveal incidents of sexual abuse that, in many cases, occurred decades ago.

"Our stories need to be told," he said. "The actions of Anderson were wrong on so many levels. I appreciate those who are telling their story, no matter how difficult."

More: UM, others praise board chair for speaking out on doctor

Weiser, like many of the accusers, said he was a student athlete when he first encountered Anderson as a freshman on the wrestling team. He doesn't recall the nature of the ailment that sparked his first visit to the doctor's office, but he continued seeing Anderson into 1967, when he was a graduate student.

He would not disclose the specifics of what he told investigators.

"I prefer not to get into that," he said. "It’s pretty private. ... I told the investigators the details of what took place, but that’s not a place I want to go."

That Weiser has joined their ranks raises some interesting twists. As the university's highest-ranking elected official, he'll be involved in not only setting policy to respond to the investigation's findings, but also will have to sign off on UM's strategy for defending itself against lawsuits and approving any settlements that may result.

Weiser, who says he will not sue the university, sees no conflict in the two roles and will not recuse himself from the decision-making.

"I still want to have my input," he says.

He remains intensely loyal to the University of Michigan — at his interview he wore a blue vest emblazoned with a block M over a maize shirt. He and his wife, Eileen Weiser, have donated more than $100 million to the university, supporting a variety of initiatives at the UM hospital system, the athletic department and elsewhere.

Their donations funded the Weiser Center for Emerging Democracies and the Weiser Diplomacy Center at UM's Gerald R. Ford School of Public Policy. Weiser, a former real estate developer and current head of the McKinley Associates investment firm in Ann Arbor, served as U.S. ambassador to Slovakia from 2001-04.

Some of Anderson's accusers say that over the years they attempted to tell the university what happened to them, but could not find anyone to listen. Others are angry UM apparently ignored rumors of abusive behavior throughout Anderson's tenure, and that after complaints were raised in the late 1970s he was quietly ousted from his role directing student health services but continued his employment in the athletic department. He served in various medical roles at the university until his retirement in 2003. 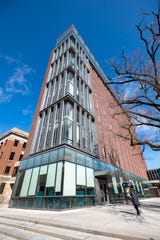 Weiser Hall on the campus of the University of Michigan, in Ann Arbor March 10, 2020. (Photo: David Guralnick, The Detroit News)

The story shares characteristics with that of Dr. Larry Nassar, the serial molester who preyed on female athletes at Michigan State University for decades while officials ignored warning signs. After Nassar's abuse came to light, the MSU board hunkered down to protect the school.

Weiser said UM will not do the same. "We are committed to transparency," he said. "We've been open about this."

He would not comment on whether UM should agree to Attorney General Dana Nessel's request to suspend attorney/client privilege during the investigation. And he does not believe the probe will find culpability among current UM staffers.

"Everyone involved is gone," he said. "It was so long ago."

More: UM official 'fired' doctor accused of sex abuse, but he stayed on another 24 years

In reflecting on his own experience with Dr. Anderson, Weiser said it had been on his mind off and on since his graduation, but it wasn't until The Detroit News told the stories of the first accusers that he really focused on what had happened to him.

"That's when I tried to remember," he said.

Asked when he realized that Dr. Anderson's treatments were inappropriate, Weiser said, "I don't have an answer for that."

He said he has no ill feelings toward the university. "Anger is not part of this," adding that his priority is to find the right policies to protect students from abusers.

"It happened a long time ago, but we have to make sure it never happens again," Weiser said. "We have to have an investigation to do that, and that’s what’s going on right now.

"I want the stories to come out. ... I am coming forward for one reason. I want to encourage other survivors to come forward and share their experiences in a safe, confidential and secure environment.

"It's really pretty private. But I saw some good coming out of it; therefore, I thought it was the right thing to do."

►Individuals seeking to report alleged misconduct by Dr. Robert Anderson are encouraged to call a new dedicated call center at 855-336-5900. The call center will be staffed Monday-Friday, 7 a.m.- 10 p.m.