Michigan's 38,000 prison inmates are at particular risk from Covid-19. The state should take this opportunity to thin the population.

Even the darkest crisis can produce opportunities for good.

The COVID-19 pandemic should spur Michigan to thin its too-large prison population, letting loose all who no longer present a danger to society.

It's cruel to keep inmates locked down in densely populated prison blocks where their risk of exposure to the coronavirus is magnified while they cross pointless days off their sentences.

“Incarcerated individuals are at greater risk of exposure to COVID-19 than the general population,” says Annie Patnaude, executive director of Americans for Prosperity-Michigan, a conservative group that has called on Gov. Gretchen Whitmer to begin targeted releases. “The rising number of cases among the over 38,000 people incarcerated in Michigan prisons makes taking swift action absolutely imperative.” 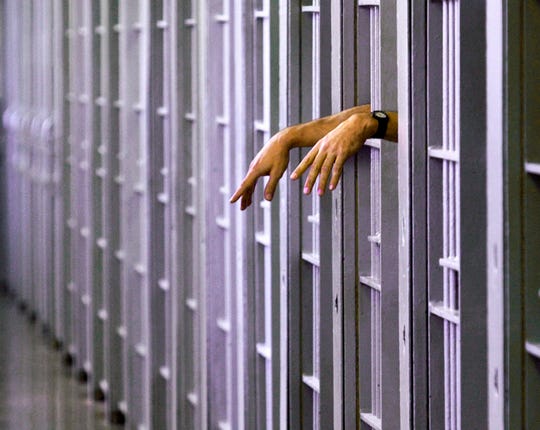 As of Friday, 183 inmates and 25 corrections officers in Michigan’s prisons have tested positive for COVID-19. One officer has died. Corrections facilities have been in lock down, restricting visitors and limiting inmate movement.

That means no visitors and little time outside their cells for exercise or other activities.

I got an email last week from Temujin Kensu, an inmate at the Macomb Correctional Facility whom I've written about a number of times because he's spent 33 years in prison for a murder he didn't commit. He described conditions there:

“We have people double-bunked in the HOLE (segregation) as well as in day rooms,” he wrote. “They keep moving sick people all around, just spreading the disease throughout the compound.”

Kensu is on the list of roughly 20 prisoners the University of Michigan’s Innocent Clinic is convinced have been wrongly convicted. The clinic puts the evidence of innocence through a rigorous test before advocating on behalf of a convict.

Whitmer should pick up that list, and those of similar groups, and start issuing commutations.

The Department of Corrections estimates there are 5,000 inmates currently eligible for parole. But many of them are sex offenders ineligible for early release under current rules, or they've been paroled before and committed violations.

This crisis necessitates bending the rules or making new ones. Expand the parole eligibility list to those deemed no longer dangerous, have behaved well while behind bars and taken steps to change their lives.

That could add thousands to a newly structured parole eligibility list.

The elderly and chronically ill are most at risk of dying of COVID-19. Roughly 10% of Michigan inmates are above age 60. For most, by that point in their lives the starch has gone out of them. Prioritize releasing them — and making sure they have someplace safe to go.

The Corrections Department is cross-referencing elderly and ill inmates against the parole eligibility list and releasing about 100 inmates a week. To get to bigger numbers, the Legislature must act to give the department broad leeway to release prisoners who can safely reenter society.

They may be prisoners, but they're still human beings. They shouldn't be placed at a higher risk of falling to this virus than the rest of us.