What does a politician get when she puts her people ahead of her party? A slap on the wrist.

It’s not time yet for The Detroit News to make endorsements for the fall election. But if it were, I'd be advocating for Karen Whitsett to be our No. 1 choice of all the candidates on the ballot.

Whitsett is a first-term Democratic state representative from Detroit who contracted COVID-19 and recovered. Though she’s young and healthy, her survival was never a certainty. She’s African American, and death rates for blacks are double that of the rest of the population.

So Whitsett was happy to be on the other side of the threat to her life. And at first, everyone was happy for her.

Then she made a critical mistake: She thanked President Donald Trump for playing a role in her recovery.

Specifically, Whitsett credited the president with calling attention to the anti-malarial drug hydroxychloroquine as a treatment for COVID-19. She took the medicine and immediately started feeling better.

So she went public with her gratitude to Trump for making her aware of the drug, expressing it on social media.

“Thank you for everything that you have done,” Whitsett told the president. “I did not know that saying thank you had a political line. … I’m telling my story and my truth, and this is how I feel and these are my words.”

And of course the president made a big deal that a black, Detroit Democrat was saying nice things about him. 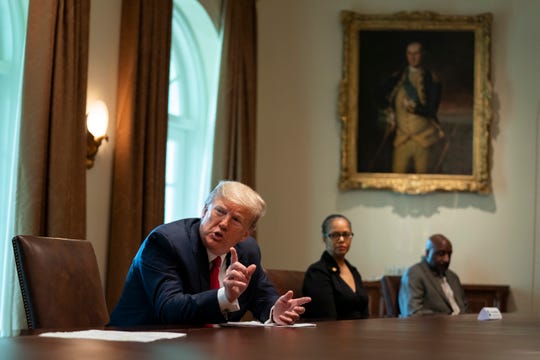 Karen Whitsett, center, and her husband Jason Whitsett, right, listen as President Donald Trump speaks during a meeting with people that have recovered from COVID-19, in the Cabinet Room of the White House, Tuesday, April 14, 2020, in Washington. (Photo: Evan Vucci, AP)

Now, you’d think Democrats would have preferred that Whitsett had died rather than lived to bolster Trump’s credibility.

Over the weekend, the 13th District Democratic Congressional Committee unanimously voted to censure Whitsett for thanking Trump, and for meeting with Vice President Mike Pence to discuss her experience with the virus.

That reason, apparently, in the view of 13th District officials, is to continue fueling the ruinous partisanship bitterly dividing Americans and working against the collaboration needed to get through this crisis.

In truth, I don't know Whitsett, and I also have no idea whether hydroxychloroquine is an effective treatment for the virus. It has been used by some reputable medical institutions, though recent tests have not been favorable. As soon as Trump started touting it, though, the drug became a target of an obsessive campaign to discredit its worth, even before testing had been done.

But Whitsett believes it worked for her. And she’s not taking attempts to shut her up meekly.

“There is so much more to this story, and it’s shameful, actually, of the Democratic Party,” Whitsett told Fox and Friends.

She said the attempt by congressional district leaders and (she believes) Whitmer to silence her was a “slap on the wrist.”

She went on to criticize Whitmer for not stopping water shutoffs in Detroit at the start of the pandemic, and not cooperating with the Trump administration to help Detroit and Michigan. 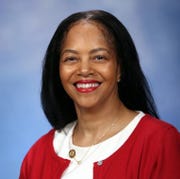 Whitsett is becoming a conservative darling, even drawing praise from some of the far-right’s biggest names.

Trump invited her to switch parties. She says she’ll stay a Democrat, a party that demands absolute ideological conformity and considers it a mortal sin for one of its members to speak civilly about the president of the United States.

Whitsett also says she’ll take the political risk of working with Trump whenever it benefits her constituents.

Wow. A politician who puts her people ahead of her party. I wish we had 100 more like her on the ballot as we weigh our endorsements.