Whitmer's communications staff will have a tough time spinning this one.

There's a difference between creative spin and willful deception.

Gov. Gretchen Whitmer was engaging in the former when she attempted to explain away as a bad joke her husband's use of her name to get special treatment at a northern Michigan boat yard.

It served the purpose of allowing the governor to apologize without throwing her spouse off the dock. People get that, even if they don’t believe it.

The spinners on Whitmer’s inept communications staff will have a tougher time making right the deceptions the administration engaged in involving the lucrative COVID-19 contact tracing contract the state gave to a Democratic operative.

When The Detroit News in April got wind of the deal reached with Mike Kolehouse, who provides technical support to the Democratic party, Whitmer denied knowledge of the contract, worth more than $194,00, and ordered it canceled. 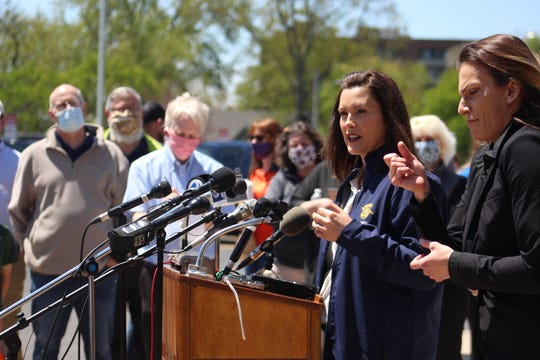 Gov. Gretchen Whitmer speaks at a press conference in Midland on May 20, 2020. She declared a state of emergency for Midland County after the Edenville and Sanford dams breached. (Photo: Office of the Michigan Governor)

“When it was brought to my attention, I told them to cancel it,” the governor told the press then.

But emails obtained by Bridge Michigan under a public records request challenge the veracity of that statement.

An email from Andrea Taverna, a senior adviser to the Department of Health and Human Services, indicates the governor’s team was on board with the contract before it was signed.

“We got the green light from EOG (the executive office of the governor) to move forward with a slightly different organizational arrangement of the contact tracing volunteer work,” Taverna wrote in an email.

That arrangement appears to have been crafted, with the help of the executive office, to hide the partisan aspects of the deal. Instead of signing a contract with Kolehouse Strategies, a known partisan enterprise, the agreement was made with the Great Lakes Community Engagement firm, also registered to Kolehouse.

The name game would, the emails suggest, give the appearance the work was being done by a firm that dealt with nonprofits instead of political campaigns, even though it was the same company.

The switcheroo was intended to deceive. As Taverna notes in an email, the work would still be done by Kolehouse.

That intent was confirmed in another email by Whitmer Communication’s Director Zack Pohl, who approved the messaging, according to the Bridge report, saying, “I would hit the fact that its used by (the Michigan Nonprofit Association) again."

When media outlets, including the Washington Post, asked whether the state was using NGP VAN, a vendor Kolehouse employed to do political work, to gather COVID-19 data, the administration said it was not.

That was a pure semantics game. The state was using Every Action VAN, the name used by the same Kolehouse vendor when it was doing work for nonprofits. And NGP Van is mentioned in the contract.

According to Bridge, Whitmer’s legal counsel, Mark Totten, asked to see documents relating to the deal the day after it was announced. Shortly after Totten’s request, Taverna assured colleagues the governor's office was OK with the plan.

This week, the administration stuck to its story that the health department was solely responsible for the contract.

The reporting tells a different story, one of an administration engaged in an elaborate bait-and-switch aimed at directing a nearly $200,000 no-bid contract to a Democratic operative at a time when the governor was competing for the party's vice presidential nomination.

And that one's not a joke.