Beard: Pistons need leader to step up — and fast 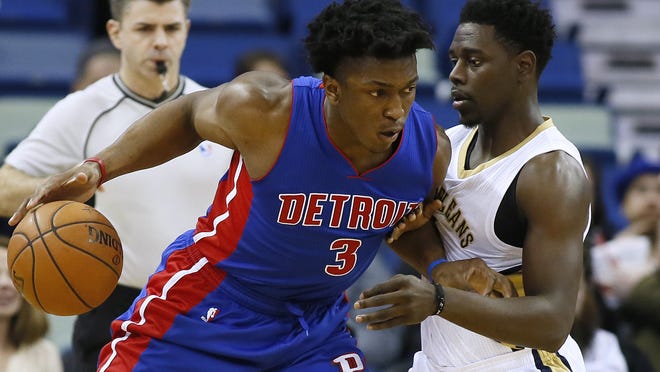 New Orleans — The Pistons are just past the midway point of the season — and maybe now they’re making their biggest revelations.

There have been subtle hints by players in the locker room and pointed comments by coach Stan Van Gundy about the team’s lack of consistent effort throughout the season.

Things seemed to hit a crescendo after Thursday night’s 115-99 loss to the New Orleans Pelicans. After another defensive malaise — allowing a season-high 72 points in the first half — Van Gundy was almost at his wits’ end.

“It was deplorable — it really was,” he said. “We look like a team that is firmly committed to trying to be mediocre.”

Just in the past week, the Pistons defeated the defending-champion Golden State Warriors but laid an egg against the Chicago Bulls in the next game. After Wednesday’s big win over the Houston Rockets, they couldn’t follow it up with a strong effort against the Pelicans.

While they’re spinning their wheels trying to move up in the Eastern Conference standings, they’re just looking to put back-to-back performances together to stay above .500.

And when they’re stuck in the mud, the frustrations are going to come out.

“We’re not really trying — we’re just coming out with no energy and not trying,” said forward Marcus Morris, in his first season with the Pistons. “Everybody has to hold each other accountable. Dudes are coming out and not playing hard on one side of the ball. We have to fix that as a team. After a while, it just gets really old.

“It’s old. We talk about it, continue to talk about it and it’s still not changing. We have to change it — myself, personally, everybody.”

That’s an astute observation from veteran in his fifth season. But it also begs the question of what’s going to be done about it. There’s the play on the court from game to game, but the real work gets done on the practice court and in the locker room.

The Pistons are a relatively young team, with Steve Blake and Joel Anthony — both buried on the bench and seeing little playing time — as the sage veterans. The current malaise begs for a leader to emerge and lay down the gauntlet.

Where that comes from is the question.

“Nobody has (stepped up) yet — not that I’ve seen. We’ll say things here and there but mostly it’s just coach talking. It has to come from the players and we have to police ourselves.”

It’s a sticky situation for Jennings to be in, as he missed almost 11 months after recovering from an Achilles injury. It’s tough to command that level of respect, but Jennings has seen it during his career and isn’t timid in talking about the need for leadership in the time of stagnation.

“Great teams in this league have confrontation; guys get into it and tell them how we feel — and we don’t have any of that,” Jennings said. “Maybe that’s what needs to be done, just to let it out and let’s go on from there. The more you keep it in, whatever you’re feeling, that’s not going to help.”

There are any number of leadership models on pro sports teams, whether it be the player who speaks his mind (Morris), the highest paid (Reggie Jackson) or the budding All-Star (Andre Drummond). Although there’s no single way to do it, the common thread is that somehow, it gets done.

With so many young players under 30, it’s going to take someone to step into the role. But Van Gundy doesn’t buy into the Pistons’ youth, either.

“I’m not making excuses: (if) I’m 22 years old — so, what, I’m going to learn how to play hard? I’m not buying that. There’s no excuse for a lack of effort. There’s things you have to learn and that’s fine.

Van Gundy could be suffering from fatigue in running the same rat race in trying to get his team to understand the importance of playing hard every night. Building a winning culture isn’t easy — and for a roster that has no players from the last time the Pistons were in the playoffs, it’s the next big hill to climb.

“We don’t get ourselves ready to play,” Van Gundy said. “We’re capable of playing hard — we just don’t want to.”

That’s not just an indictment against the effort, but at the heart of a team. That’s about punching the clock every day and going to work.

And they won an NBA title.