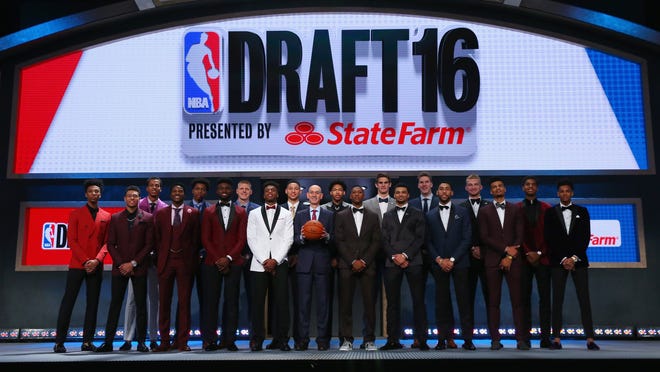 Auburn Hills — Now that the smoke has cleared on Thursday’s NBA draft, teams can introduce their new rookies and start making plans for summer leagues, which begin next week.

Several teams made marked improvements with their selections; others made trades that somehow made them worse.

Here’s a look at some of the winners and losers from the NBA draft:

*  Oklahoma City Thunder: They put the draft on pause when they traded Serge Ibaka and got a monstrous haul in return: Victor Oladipo, Ersan Ilyasova and the rights to Domantas Sabonis. The Thunder could afford to deal Ibaka, because of Steven Adams, Enes Kanter and now Sabonis. But the addition of Oladipo gives them a scary-athletic backcourt — and that has to be an enticing roster to help Kevin Durant consider returning.

*  Caris LeVert, Michigan: Sure, he’s going to the Brooklyn Nets, but getting drafted at No. 20 overall — after a pair of foot surgeries shortened his final two years at UM — is a significant vote of confidence. He was projected as a lottery pick before the injuries but the Nets apparently were fine with his medical outlook, though he likely won’t be able to play in summer league.

*  Pistons: So, they didn’t get the point guard they sought, but they got an even better pick in big man Henry Ellenson, whom they had on their draft board at No. 10, eight spots above their pick. They get a player they can develop over the next couple years, but could also step in and fill a void at power forward on the bench almost immediately.

*  Minnesota Timberwolves: With so much uncertainty after the No. 2 pick, the Wolves and new coach Tom Thibodeau got a keeper in point guard Kris Dunn at No. 5. He can slide in alongside Andrew Wiggins, rookie of the year Karl-Anthony Towns and Zach LaVine to provide a promising nucleus.

*  Deyonta Davis, Michigan State: It was disheartening to see him fall from a projected lottery pick to the second round — similar to Draymond Green did a few years ago — but as MSU coach Tom Izzo said, it’s a cautionary tale about leaving early for the NBA. Davis was the first one-and-done from the Spartans since Zach Randolph.

MSU’s Davis on draft: ‘I expected (to go) early’

*  Orlando Magic: There isn’t always a winner and a loser in a trade, but the Magic get special distinction as a loser after giving up way too much to get Ibaka. He hasn’t been a centerpiece for a team in the past and it’ll be hard to imagine him becoming one with the Magic, who don’t have the right pieces around him to be a playoff team this year.

*  Milwaukee Bucks: Thon Maker at No. 10? Maybe he’ll be the next Giannis Antetokounmpo, but that’s a heck of a risk to take with a top-10 pick, given their other needs. Maker doesn’t project to be an immediate contributor — at least until he adds some weight and muscle — and the Bucks need to be moving toward contender status.

*  Boston Celtics: They had a slew of first-round picks but didn’t get the big fish they coveted, in the Bulls’ Jimmy Butler. They dangled the No. 3 pick as bait all week and no team took it; they ended up selecting Jaylen Brown, who isn’t a home-run pick at that spot. They may not be done dealing, but for now, they’re still in flux.