Detroit Jazz Festival 2015 is a wrap, as Pat Metheny and a big band perform ‘Hommage’

By any measure, artist-in-residence Metheny’s tenure is a success, with big crowds at all of his performances

Detroit Jazz Festival 2015 is a wrap, as Pat Metheny and a big band perform ‘Hommage’

Christopher Glasow and Sarah Campbell dance together while listening to the band Tuba Skinny. David Guralnick, The Detroit News
Fullscreen

A street performer gathers attention from the crowds as they walk into the festival. David Guralnick, The Detroit News
Fullscreen

A large crowd listens to the Ron Carter Trio at the Carhartt Amphitheater stage. David Guralnick, The Detroit News
Fullscreen

Robin Rapuzzi of the band Tuba Skinny talks to the crowd during their performance on the Absopure Water Front stage. David Guralnick, Detroit News
Fullscreen

Spencer Barefield warms up during sound check before the DJF 2015 Homecoming Band performs on the JPMorgan Chase main stage at the 36th annual Detroit Jazz Festival in Detroit on Sept. 6. Robin Buckson, The Detroit News
Fullscreen

People sit in lawn chairs beside the stands at the JPMorgan Chase main stage. Robin Buckson, The Detroit News
Fullscreen 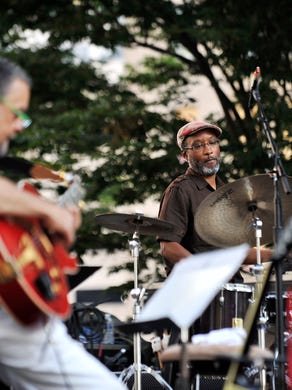 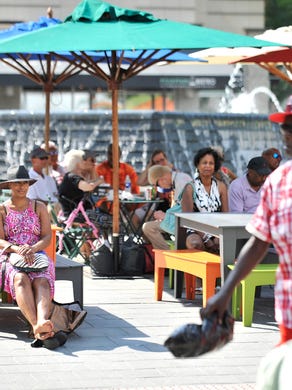 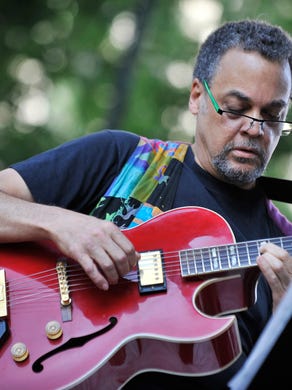 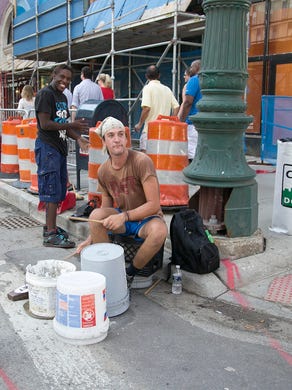 Rudresh Mahanthappa (far left), has a laugh with bandmates before they take the stage. Amanda J. Cain, Special to the Detroit News
Fullscreen

Jazz Fans talk amongst themselves at the JPMorgan Chase Stage. Amanda J. Cain, Special to the Detroit News
Fullscreen 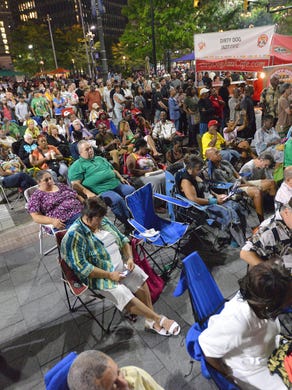 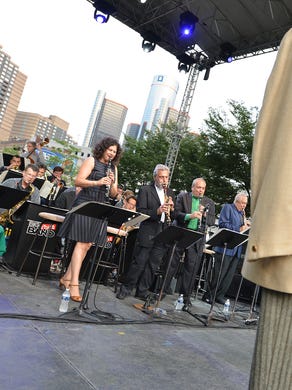 Pat Metheny, artist in residence of the Detroit Jazz Festival, tunes up for a sound check on his custom-made Pikasso 42-string guitar. David Coates, The Detroit News
Fullscreen

Pat Metheny warms up before the start of the Detroit Jazz Festival. David Coates, The Detroit News
Fullscreen

Artist-in-residence Pat Metheny plays on the Carhartt Amphitheater stage on Monday, the final day of of the 2015 Detroit Jazz Festival in downtown.(Photo: David Guralnick / Detroit News)

Pat Metheny drew the Detroit Jazz Festival to a close Monday night with a fascinating multimedia piece, “Hommage,” a tribute to the German bassist Eberhard Weber. Weber, now 75, suffered a stroke in his mid-’60s and can no longer play, Metheny explained to the audience.

Metheny, who knew Weber from when they both played with Gary Burton, was asked by the German government last year to take part in a tribute to Weber. Metheny wrote “Hommage” for his friend after tracking down videotapes of Weber playing solo bass concerts. He composed music to go with it.

“I didn’t want to just use his music, the notes on the page,” Metheny said. “His sound was so vital, he needed to be in the piece.”

And so it was that the audience would periodically applaud a flickering image on a video screen.

It might sound like heavy going, but the interplay between Metheny and Weber worked. At times Weber sounded like a sitar, at another time he played a boogie woogie line, breaking the audience up. Metheny left himself enough room to solo on various guitars, and on guitar synthesizer.

It’s probably due partly to Metheny’s stint this year as artist-in-residence that the festival drew record crowds despite sweltering 90-degree temperatures. According to festival publicist Steve Blow, organizers believe attendance is up “about 25 percent or so” from last year, which was estimated at about 200,000. Several stages were at capacity starting early in the day, and the Marriott jam sessions drew overflow crowds.

Metheny fans were overjoyed to see their favorite up close so often, and in such different settings.

Metheny returned the good vibes. “It’s so apt that the hippest jazz festival in the world would emerge out of Detroit,” Metheny said Monday. “I deeply appreciate what music means to the community of musicians who come from here.”

It was standing (or really, shoving) room only at his four gigs. The Gary Burton Quartet reunion featuring Metheny at the intimate Waterfront Stage on Saturday was particularly perilous for the unlucky folks who didn’t have lawn chairs or got there too late for VIP seating. It will be a boon to the jazz festival when the city of Detroit renovates Hart Plaza so that seating for the festival’s larger audiences is safer and more comfortable.

Metheny and Burton, augmented by Scott Colley on bass and the very tight Antonio Sanchez on drums, played fusion jazz as mellow as the azure twilight sky, including “Coral” by Keith Jarrett, and Antonio Carlos Jobim’s “O Grande Amor.”

The festival kicked off Friday with a nod to Benny Goodman, in “Benny’s Threads.”

Author Douglas Preston gave a narration about how he came to own several of Goodman’s outfits — Benny’s threads. The suits — including a jazzy tuxedo, a green three-piece suit and an ecru jacket over forest green pants — were displayed onstage on mannequins as a quartet of clarinetists — Eddie Daniels, Anat Cohen, Ken Peplowski and Paquito D’Rivera — played, showing each’s debt to the king of swing.

Metheny’s Trio performance Friday night featuring Sanchez and Colley kicked into overdrive when Detroit’s Kenny Garrett stepped into the spotlight with his saxophone, dapper in a blue suit.

Saturday’s Steve Turre and Friends performance, featuring Detroit saxophonist James Carter, paid homage to Rahsaan Roland Kirk, and showed how many musicians it took to replicate what Kirk did by himself — three horn players: trombonist Turre, Carter on tenor sax and flute, and Vincent Herring on soprano and alto sax.

It was also enjoyable to watch Carter playing alongside saxophonist David McMurray on Sunday with the DJF 2015 Detroit Homecoming Band, led by guitarist A. Spencer Barefield, with Dave Young on bass and Djallo Djakate Keita on drums.

Danilo Perez’s “Detroit World Suite,” commissioned by the jazz festival, started out with Martin Luther King Jr.’s voice stating, “We shall overcome” several times, and was an upbeat ode to the city’s resiliency, with a joyous Afro-Cuban undercurrent that made it almost impossible not to dance.