Riots in Ferguson, Mo., draw President Obama into a familiar, although unwritten part of his job description: a blend of national healer and scold-in-chief. 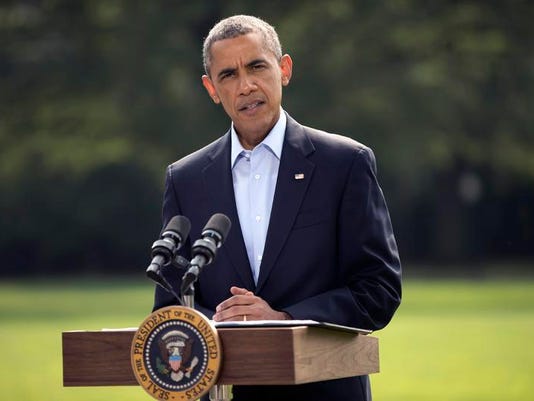 The Ferguson case gave fodder to Obama critics.<137> speaks on the South Lawn of the White House in Washington, about the ongoing situation in Iraq. Obama already is heading toward a fall fight with Republicans over his ability to change immigration policies. And he’s also facing potential rifts with members of his own party who are in tough re-election contests. If Obama takes the broadest action, removing the threat of deportation for millions of people who are in this country, then the short-term risks appear greatest for Senate Democrats in conservative-leaning states. (AP Photo/Pablo Martinez Monsivais)<137>(Photo: Pablo Martinez Monsivais, AP)

Riots in Ferguson, Mo., draw President Barack Obama into a familiar, although unwritten part of his job description: a blend of national healer and scold-in-chief.

It’s always risky for a president to get involved in local disputes. But everybody looks to this president when a local dispute disrupts what the Constitution calls the “domestic tranquility,” especially when the dispute involves questions of race.

After four nights of rioting over a racially charged shooting, there wasn’t much tranquility in the working-class St. Louis suburb.

Ferguson police officer Darren Wilson shot and killed Michael Brown, an unarmed 18-year-old, police said. But police offered no details — including the officer’s name or information about a convenience store robbery in which Brown was a suspect — for almost a week.

In the meantime, protests over the shooting erupted into four nights of rioting and some looting that made Ferguson look like an uprising in the Gaza Strip. A second controversy erupted, whether police in full riot gear and armored military vehicles further enflamed the violence with their militaristic handling of peaceful protesters — including the arrests of two journalists and a St. Louis state senator.

By the time I heard that President Barack Obama was going to interrupt his vacation at Martha’s Vineyard, Mass., to say something about Ferguson, I was not surprised.

I only wondered how long it would take for his conservative critics to complain, regardless of what he said, that he was “dividing Americans by race.”

The answer: not long.

Fox’s “The Five” co-host Andrea Tantaros claimed that Obama’s comments “only inflamed the situation,” but “I’m not surprised, because he’s stuck his nose into other local issues.”

I, by contrast, was neither shocked nor surprised, except by the great pains the president took to sound evenhanded to the point of oratorical blandness.

He praised Gov. Jay Nixon of Missouri and extended his sympathy to Brown’s family that “will never hold Michael in their arms again.”

He scolded looters and those who commit “violence against police” and also scolded police, saying there is “also no excuse” for “excessive force against peaceful protests, or to throw protesters in jail for lawfully exercising their First Amendment rights.”

He called for openness and transparency in the death investigation and repeated his earlier announcement of an independent Justice Department investigation. Noting that “emotions are raw,” that “there are going to be different accounts of how this tragedy occurred” and “of what needs to happen,” he called for unity, “belief in equality under the law” and “let’s remember that we’re all part of one American family.”

For this, his tireless critics accuse him of dividing Americans by race. It seems to me that the Ferguson police, among others were doing a good enough job of that by themselves.

If Obama really wanted to be provocative, he could have brought up other matters that many were talking about, like the militarization of local police forces, an issue on which the liberal left and libertarian right find unusual agreement.

Sen. Rand Paul in a Time magazine essay called for a new look at a program Congress enacted in 1990 that has armed local police with so much surplus military gear that the “images and scenes we continue to see in Ferguson resemble war more than traditional police action.”

But the best news emerged after the governor put the Missouri Highway Patrol in charge, which resulted in the town’s first relatively peaceful night in almost a week. Much of the credit went to state patrol Capt. Ronald S. Johnson, a native of Ferguson. As he hugged some local residents, he told reporters, “I’m not afraid to be in this crowd.”

Instead of trying to block the protesters, he marched with them. Instead of arresting reporters, he set up a media staging area. Instead of launching gas grenades, he told officers working crowd control to take off their gas masks.

Presidents can set a tone, praising and scolding from Washington, but real change comes from local leaders like Capt. Johnson who put history’s best lessons into practice.