Changing the way Michigan awards its votes is worth discussing, but wait for 2015 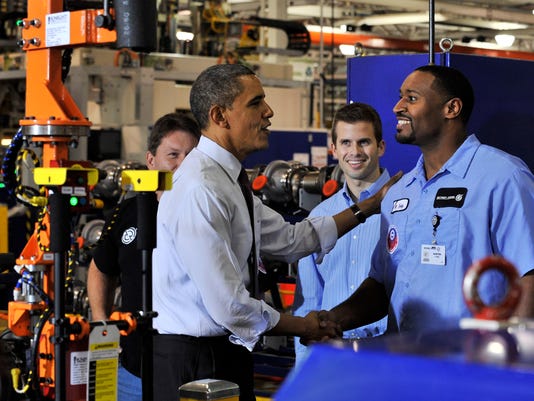 Whether or not splitting Michigan’s electoral college votes would encourage candidates to spend more time here, lame duck is not the time to take up such reforms.(Photo: Robin Buckson / The Detroit News)Buy Photo

The idea of changing the way Michigan awards its presidential electoral votes is not a bad one to explore. The electoral college is an arcane institution, and does have the potential of disenfranchising voters.

But that’s a change that merits thorough debate and considerable study of its impact. It’s not something that should be rushed through a lame duck session of the Legislature.

State Rep. Pete Lund, R-Shelby Twp., has offered a bill to end Michigan’s winner-take-all presidential votes and replace it with a system that awards the state’s 16 electoral votes on a proportional basis.

He says his purpose is to make Michigan more relevant in the presidential contest, and to force all candidates to spend more time campaigning here.

Critics of the idea — mostly Democrats — assign crass motives to Lund’s idea. Since Michigan has voted for Democratic presidents since 1996, the change would be an advantage to Republicans, as long as that pattern continues. The GOP candidate would get some of the state’s electoral votes, instead of none.

Had Lund’s system been in place in 2012, President Barack Obama would have received 12 electoral votes from Michigan, and Mitt Romney four. In 2008, the split would have been 14 for Obama, and three for John McCain (Michigan lost one electoral vote after the 2010 reapportionment.)

Knowing there were at least some votes to be had in Michigan, Lund says, would encourage candidates to campaign here, even if they didn’t expect to win.

It’s a bit complex, but better than Lund’s earlier plan, which would have awarded the electoral votes by congressional district. That would have made redistricting an even bigger partisan battle than it is now, and unfairly benefited whichever party controlled the map.

There is merit in a system that acknowledges the minority vote in awarding electoral votes. In states’ where one party dominates, minority party voters may as well stay home.

Candidates are becoming very sophisticated in mining electoral votes, concentrating their efforts mostly in large states where the outcome is in play. That hasn’t been the case in Michigan for quite a while.

Only Maine and Nebraska award their electoral votes by popular vote, and in those states it’s a straight split.

A nationwide movement called the National Popular Vote is afoot, and is getting considerable attention. It would scrap the electoral college altogether and elect the president on a straight popular vote.

Again, these are good discussions to have. It may be that the electoral college is outdated, or that the awarding of its votes could be improved.

But fundamentally changing the democratic process is not a debate to have in the hurry-up climate of a lame duck legislative session.