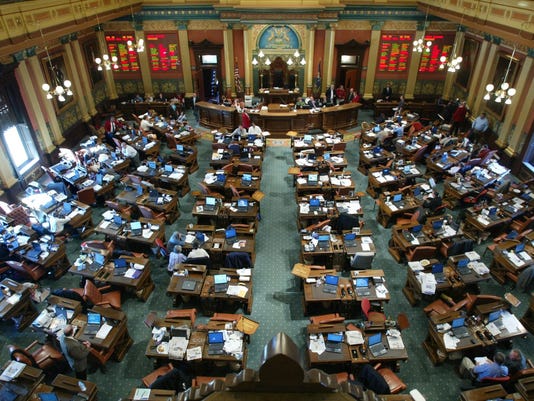 The least the Legislature can do is OK funding for nonpublic schools to cover state mandates.(Photo: Al Goldis)

Republicans in the state House and Senate have included funding in this year’s budget to help private schools meet state-mandated health and safety regulations. All public schools in the state get funding specifically to cover these costs, and private schools should, too. The full Legislature should get on board.

If lawmakers do approve the funding, it would be the first time the state offers this kind of support to private schools. Since the funds aren’t directed to any instructional activities, it doesn’t conflict with Michigan’s strict constitutional language blocking state funding for nonpublic education.

It’s the second time lawmakers have considered the funding, but last year it failed to gain traction. Prospects are more hopeful this year. Both the full House and Senate Appropriations Committees have approved the line item: $1 million was set aside in the House; $5 million in the Senate.

The Michigan Catholic Conference, which has helped lead the effort to include the funding, estimates private schools in the state spend roughly $10 million a year meeting the regulations — about $100 per student. While the proposed funds don’t come close to meeting that target, the Catholic Conference would be pleased to see any resources included.

The money would help private schools pay for requirements such as employee background checks, safety drills and immunization verification — all required by state law.

Not surprisingly, this is a party line issue. But helping all schools meet basic health and safety requirements shouldn’t be partisan. Plus, there is already precedent for the state offering some assistance to nonpublic schools. Private school students can benefit from shared time instruction services from public schools as well as courses from the Michigan Virtual University. The Michigan State Police in 2015 included 15 private schools in grants it awarded to help schools purchase equipment to boost safety.

Michigan wouldn’t be alone in offering this aid. Ohio and New York include funding in their budgets to help private schools meet state mandates.

Rep. Sarah Roberts, D-St. Clair Shores, tried to strip the $1 million in the House; she expressed constitutional concerns and wanted to direct the funding elsewhere.

“My Democratic colleagues and I fought for fair solutions to this flawed budget so all students in Michigan, not just a select group have access to a great education,” said Roberts, minority vice chair of the school aid subcommittee, after the Appropriations Committee approved the K-12 budget.

If lawmakers really want all students in Michigan to have access to a great education, then they should look at changing the state constitution to allow vouchers or tax credits for private schools. In the meantime, the least the Legislature can do is approve this funding for nonpublic schools to cover state mandates.