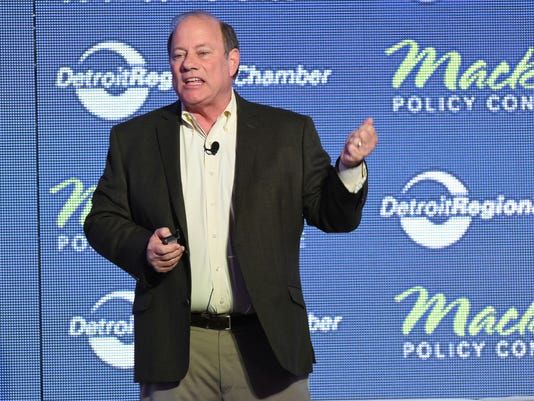 Mayor Mike Duggan, who has casually signaled support for Proposal B, has introduced initiatives to increase skilled trades training in the city.(Photo: John L. Russell / Special to the Detroit News/John)Buy Photo

This editorial has been updated to correct the amount of fines levied on contractors working on the new Red Wings arena.

Detroit’s ongoing comeback, spurred largely by entrepreneurs and developers who see potential in the city’s often crumbling buildings, should not be burdened by extra costs in a market where return on investment is still uncertain.

Two poorly constructed proposals on the November ballot would do just that by mandating developers enter into very specific community benefits agreements (CBAs) with the city. The risk here is dulling the economic resurgence.

Voters can vote for one, both or neither. Both proposals are bad, although of the two, Proposal B is better.

Community input should be part of any responsible major development. In fact, most projects begun in Detroit in recent years have included agreements that contain goals to hire Detroiters, as well as to meet environmental and housing concerns.

But codifying them in law with hard numbers that don’t take into account individual circumstances is a really bad idea.

And, as evidenced by the recent $500,000 fine imposed on contractors working on the Olympia Entertainment’s Little Caesars Arena because their workforce is short of 51 percent Detroiters, such mandates will add costs to doing business in Detroit. They will also delay new development projects.

Those aren’t sacrifices Detroit’s economy, still weakened by the trauma of bankruptcy and decades of disinvestment, can shoulder.

Further, such mandates ignore the myriad benefits businesses and developments bring to Detroiters simply by their existence. Residents need these projects in Detroit if they want jobs and tax revenue.

Proposal A is an initiative from the activist group Rise Together Detroit and would require developers to provide additional benefits if their projects have a public and/or private investment of at least $15 million and they’re seeking at least $300,000 in tax breaks.

No other major city imposes community benefits mandates on developments of that size. It will shut a lot of smaller developers out of the market and make Detroit less competitive for investment.

The proposal is also completely vague as to who would be involved in the negotiating process or what its time frame might be. That’s a huge red flag for any business. A coalition of nearly 20 union groups strongly rejects Proposal A, rightly arguing it would drive jobs out of the city.

The second, somewhat less damaging proposal was placed on the ballot by the Detroit City Council to counter Proposal A. It sets the kick-in limit at $75 million in investment and/or tax breaks of at least $1 million. Neighborhood groups also would serve advisory, not controlling roles in the negotiations.

If both proposals pass, the one with more votes will be enacted.

The proposals ignore a very real problem in Detroit — the shortage of skilled workers to fill the jobs.

Until skills training catches up with the demand, it is unfair to punish businesses for failing to find help that doesn’t exist.

Mayor Mike Duggan, who has casually signaled support for Proposal B, has introduced initiatives to increase skilled trades training in the city. But most vocational public schools in the city remain closed, cheating students of a shot at good-paying jobs.

Voters are free to vote for neither proposal, and they should. The City Council can go back to the drawing board or scrap the idea altogether.

Voters can also take advantage of this opportunity to revisit whether or not Detroit should provide generous tax breaks to certain developments or zoning areas. As the city continues to rebound, certain incentives should probably fade away.