Our Editorial: Fight for robust speech on the quad

State lawmakers are right to be concerned about campus discourse but new bills could hurt, not help

Our Editorial: Fight for robust speech on the quad 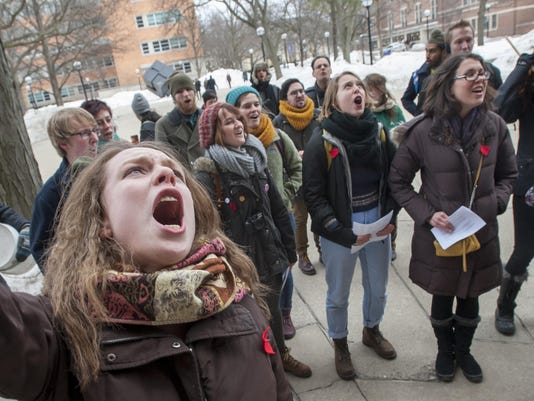 State lawmakers are right to be concerned about campus discourse but new bills could hurt, not help(Photo: David Guralnick / Detroit News)

Bad behavior on college campuses is plentiful, and the negative impact of these protests and assaults on free speech is real. While it’s understandable that some Michigan lawmakers want to take action, additional legislation could have the unintended effect of hampering students’ First Amendment rights.

Sen. Patrick Colbeck, R-Canton, introduced two bills earlier this year to address the growing concerns over free speech on campus. Most often it is conservative students and invited speakers who are silenced or deterred, and Colbeck says the state’s 15 publicly-funded universities are not doing enough to protect the constitutional rights of all students.

The bills would seek to protect free expression on campus in several ways. For example, speech could only be restricted when it serves a compelling government interest, and administrators would need to provide “ample alternative opportunities” for the free expression.

The legislation also calls for colleges to craft a pro-free speech policy that would be emphasized during freshman orientation. The bills also punish students who violate the free speech rights of others. Repeat offenders would be punished more harshly. Currently, students who disrupt campus events and speeches they dislike face little repercussions.

Colbeck’s bills are modeled after legislation developed by the Goldwater Institute, which decided to tackle this issue after students at Paradise Valley Community College in Arizona were disciplined by the administration for passing out copies of the Constitution outside of certain “free speech zones,” according to senior attorney Jim Manley. A similar incident happened last fall at Kellogg Community College in Battle Creek.

Virginia, Wisconsin, California, North Carolina and Louisiana, in addition to Michigan, are pursuing the legislation.

Stanley Kurtz, a senior fellow at the Ethics and Public Policy Center, dubbed the 2016-17 academic year the “Year of the Shout-Down,” cataloging in National Review the many instances of anti-free speech activity.

In addition, the Foundation for Individual Rights in Education has found that Michigan’s public universities all have problematic free speech codes and at least five schools, including the University of Michigan and Eastern Michigan, have policies that substantially restrict free speech.

Still there are concerns about the legislation’s potential negative impact. The ACLU of Michigan has said the bills could chill free speech through harsher penalties for protesting students. Government attempts to choke off political protest would surely be deemed unconstitutional.

To Colbeck’s credit, he’s working with the ACLU to modify language in his bills. Rana Elmir, the group’s deputy director, says that she’s “confident that the concerns that we raised will be addressed — and some have already been addressed.”

Lawmakers also must guard against usurping the ability of universities to maintain order on their campuses.

Michigan’s universities must do a better job of keeping speech free for all students. But any changes to existing law must err on the side of protecting the free speech rights of all, even those who are protesting other speakers.