"The wholesale rewrite of NAFTA in a manner that makes trade less free and more costly was not needed." 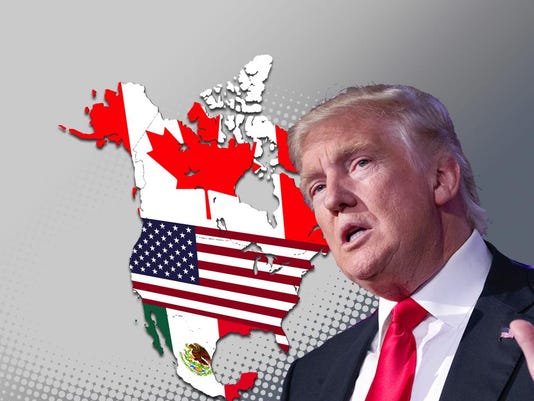 The Trump administration has softened a key Nafta demand for more North American content in car manufacturing – a potential olive branch on arguably the biggest sticking point as the U.S. pushes to reach a stopgap deal this month, according to three people familiar with the talks.(Photo: Photo illustration / The Detroit News, AP)Buy Photo

Looking at the trade deal President Donald Trump struck with Mexico this week, you might ask, "A Republican did this?" Yes, a GOP president and supposed conservative wants to replace the North American Free Trade Agreement with a pact that may as well have been dictated by Big Labor.

Trade deals are intended to foster more vigorous commerce between nations and lower prices for consumers.

This new NAFTA, if approved, would do the opposite. Trump has built in a number of protectionist measures that will surely curtail trade between the two nations and sharply drive up the cost of automobiles.

This is protectionism at its worst.

While NAFTA did need updating and was no longer working entirely in America's best interests, it still serve the cause of free trade.

The new NAFTA envisioned by Trump and forced upon Mexico under the threat of even more restrictive measures layers on tariffs and mandates aimed at limiting the quantity of goods and services that cross the border and shielding American jobs from competition.

Its largest impact is on automobiles and auto parts, meaning it comes down hardest on Michigan, a state that backed Trump in the 2016 election.

The deal would raise the threshold for qualifying as "American made" to 75 percent of a vehicle's content, up from the current 62.5 percent.

Also included is the extraordinary requirement that 40 percent of imported SUVs and 45 percent of pickup trucks be built by a workforce that makes at least $16 an hour, or face a tariff.

Mexico won't be able to meet the duty-free conditions, so it will have to tack on a 2.5 percent tariff to every vehicle it exports to the U.S. That cost will be paid by American consumers.

A side deal crafted in the name of national security caps vehicle imports from Mexico at 2.4 million and attaches additional levies on auto parts imports above $90 billion. Both measures would limit future growth.

The United States has no business setting minimum wage rates for another country. Nor should it be attaching hard restrictions to trade.

Remember that this is coming at a time when the U.S. economy is growing at above a 4 percent annual rate and unemployment is below 5 percent.

If protectionist measure were ever justified -- and they rarely are -- they certainly are not defensible at a time when there are already 7 million unfilled jobs in the United States.

If Trump is successful at bringing more jobs from Mexico to the U.S., who's going to fill them, particularly since he's also pushing policies that would limit immigration?

The wholesale rewrite of NAFTA in a manner that makes trade less free and more costly was not needed.

Canada, which forms the third leg of NAFTA, isn't included in this deal, but rejoined talks on Wednesday. Any agreement that is reached between the three countries must be approved by Congress.

The hope is that Canada can move a renegotiated NAFTA much closer to its original intent of fostering robust trade, and that a Republican Congress would signal its wariness of protectionism.

Trump is fulfilling a campaign promise with this deal, and American automakers and consumers will pick up the tab.