"Major new policy initiatives should wait for newly elected  and returning lawmakers and a new governor." 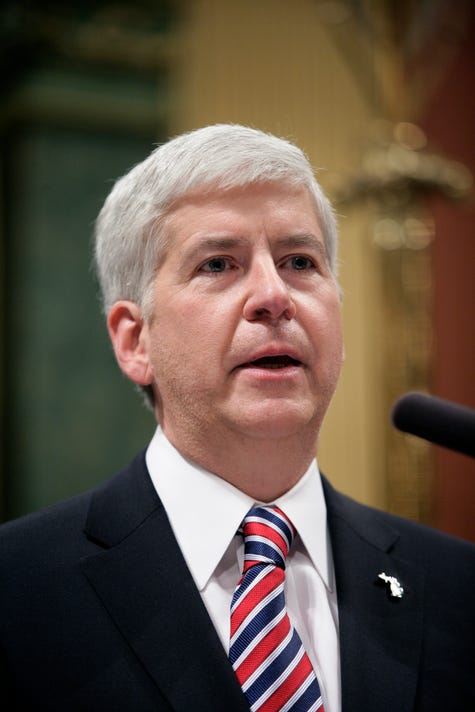 Michigan Gov. Rick Snyder delivers his State of the State address to a joint session of the House and Senate, Thursday, Jan. 16, 2014, in the House Chambers of the state Capitol in Lansing, Mich. (AP Photo/Al Goldis)(Photo: Al Goldis, AP)

Michigan doesn't need a whole lot of lame ducks flying around the Capitol as lawmakers return to Lansing for a final post-election session before the new governor and Legislature take over on Jan. 1.

This is not the year for cramming through a wish list of partisan or controversial legislation that legislators were unwilling or unable to pass when they were still accountable to voters.

Still, there is some work that has already started that should be finished, and wherever possible should be done though bipartisan consensus.

That may be tough when it comes to the most pressing lame duck agenda item: Delivering authorizing legislation for the minimum wage and paid sick leave ballot proposals that the Republican Legislature usurped before they could go to voters this fall.

After the required signatures were gathered, the Legislature agreed to adopt the measures, keeping them from a vote the GOP feared it would lose. The proposals would raise the minimum wage in steps to $12 an hour, and mandate that all employers offer paid sick leave.

The proposals should not be gutted to subvert the intent of the petition signers. Nor should they be enacted in a manner that would damage businesses and kill jobs.

That's a difficult task, and if mishandled, will surely result in litigation. Leaders of both parties and Gov. Rick Snyder should commit to producing a consensus package.

Also on the plate is a Snyder-generated proposal to raise garbage dumping fees to pay for environmental clean-up and water customer fees to upgrade aging underground infrastructure.

This is a sensible approach to meeting a pressing need and enjoys support from the business community and many Democrats. But Republican legislative leaders are balking. They should step up to the responsibility of fixing Michigan's infrastructure and ridding it of pollution.

Beyond that, it would be terrific if lawmakers could come to agreement on codifying some of the good government practices that helped Snyder bring fiscal discipline to state government.

Those include two-year budgeting, an early deadline for enacting the annual spending plan and a long-term commitment for paying off legacy costs, among other things.

Extending the sunset on the already-passed Good Jobs For Michigan program, which provides tax exemptions for major development projects in urban areas, is a worthwhile endeavor to give that effort the long-term certainty it needs.

This Legislature has repeatedly punted on its obligation to enact required education accountability measures, including a simple A-F grading system for schools, and should at last take care of that.

Most of this to-do list amounts to cleanup business that the Legislature should and could finish, and with the proper approach, should be able to do it with bipartisan agreement.

But otherwise, major new policy initiatives should wait for newly elected  and returning lawmakers and a new governor, who will be accountable to voters for their work, to take their seats in January.