"These are not the Founding Fathers at work in Washington today. More like their spoiled rotten grandchildren." 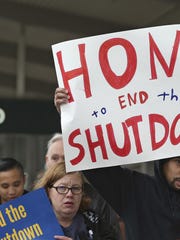 Now the budget standoff has become a petty grade school snit, leaving us to wonder how much worse this breakdown in regular-order governing will get before it's over. If it's ever over.

This is what dysfunction looks like. And it's what happens when politics become so imbued with personal animosity that it is impossible for any measure of civil, constructive conversation to take place.

House Speaker Nancy Pelosi stuck out her tongue first last week, taunting President Donald Trump with the threat of canceling his State of the Union speech on Jan. 29 if the partial government shutdown is not over by then.

The Democrat cited security concerns, contending that unpaid secret service and Homeland Security Department staffers would not be prepared to provide adequate safety for the assembled Congress members and other officials and dignitaries.

Her concern was wholly fabricated. Both the Secret Service and Homeland Security say they were never contacted by the speaker, and if they had been, would have told her they're fully prepared for the event and are capable of keeping it secure.

Trump, never one to let a slight go unanswered, yanked Pelosi's ponytail, refusing to supply a military plane for the trip she had planned to take with other Congress members to Afghanistan and Brussels. The delegation got word of the cancellation after they'd already boarded the bus for the airport.

The president said it would be unseemly for the speaker and crew to leave the country while the government was shut down, and that she should stick around to negotiate with him.

But if she wanted to go ahead with her "public relations event," he wrote in his letter, she could fly commercial. As if.

Both Pelosi and Trump are acting within their constitutional authority. The president can only stand in the House chamber at the invitation of the speaker. And as commander and chief, Trump decides who gets the use of military aircraft.

It's all legal. And all silly.

Trump, Pelosi and Democratic Senate Minority Leader Chuck Schumer are playing a dangerous game of chicken that could easily paralyze the nation and tank the economy. All it would take is for the air traffic controllers and TSA agents who are working without the pay to stay home.

The Democratic leaders and the president want so badly to win this standoff, which is ostensibly about border wall funding but in reality is a contest for dominance in Washington, that they aren't even pretending to work toward a compromise.

Instead, they have entered the phase in which they try to inflict the maximum pain and humiliation on each other.

It's petty stuff, and hard to watch for those who still harbor hope that we can keep the republic.

These are not the Founding Fathers at work in Washington today. More like their spoiled rotten grandchildren.