"Public Act 51 was created in 1951 and though it has been updated since, it does not allocate funds in an efficient way to bring roads up to snuff."

Gov. Gretchen Whitmer’s proposed 45-cent gasoline tax to fix Michigan’s roads would generate about $2.5 billion a year in new revenue dedicated to roads. But the new funds, like the existing $2.6 billion currently generated annually from vehicle registration fees and fuel taxes, won’t necessarily go to roads in the most desperate condition. 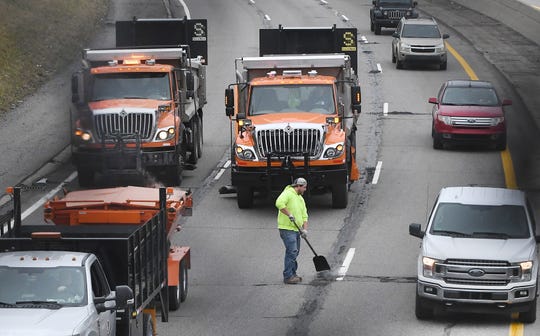 Some local leaders, including Wayne County Executive Warren Evans, are calling on the state to review the funding formula, which they say hasn't kept up with infrastructure realities — especially in heavily trafficked areas such as Metro Detroit.

What is the rationale behind those percentages? Our guess is as good as yours.

Public Act 51 was created in 1951 and though it has been updated slightly since, it does not allocate funds in an efficient way to bring roads up to snuff.

For counties, 56 percent of their road funds come from vehicle fees, 24 percent based on county road mileage and 20 percent on other factors.

The mileage money is calculated based on linear miles, regardless of whether a road is two lanes or six, and without consideration ofhow much traffic it carries.

That formula sends a disproportionate amount of the funding to lesser traveled roads in rural areas, leaving Metro Detroit with inadequate funding.

And though there is a sub-allocation of funding for urban counties, it’s not enough to offset the cost of wider roads and more potholes.

Whitmer’s plan would dedicate revenue from the new gas tax toward the worst roads in recognition that Public Act 51 is a barrier to rebuilding Michigan infrastructure.

If the gas tax is adopted, much of the money will end up going to MDOT because state roads need the most work, and that’s likely to disappoint county road commissions and municipalities.

Michigan's lawmakers will continue to debate the governor's proposed gas tax hike, but while they do so, they should also take a look at Public Act 51 and craft a commensurate plan for a fairer system of distributing road funds.