"The attorney general has wasted no time in her first few months in overthrowing or undermining laws she doesn’t like."

Dana Nessel has wasted no time in her first few months in office throwing out or undermining laws she doesn’t like. But she’s the attorney general, not the Legislature, and she is abusing her authority.

The three distinct branches of government exist for a reason, and as part of the executive branch, Nessel’s job is not to interfere with law-making. She’s supposed to enforce the laws.

Nessel can advise on the legality of legislation in the works, but she’s taken her role and her partisanship much further. Her activism is unprecedented in Michigan.

There are several recent examples that demonstrate Nessel's disregard for legislative authority.

Last week, Nessel signed a settlement agreement with the ACLU in an adoption case that will likely lead to faith-based placement agencies getting out of this important service.

The ACLU sued the state in 2017 over its 2015 law that protects the religious freedom of adoption agencies if they choose not to place a child with a same-sex couple. Catholic and other faith-based agencies are some of the largest providers that contract with the state in finding homes for children in foster care.

More: Jacques: In adoption case, do what’s best for kids

Nessel, who is a lesbian and who has represented gay couples in high-profile cases, openly said she wouldn’t enforce the 2015 law, so this settlement is in line with her beliefs.

“This settlement violates the state law protecting religious adoption agencies,” stated Lori Windham, senior counsel at Becket, which intervened in the case on behalf of one of the adoption agencies.

Nessel should have let the lawsuit play out in the courts. 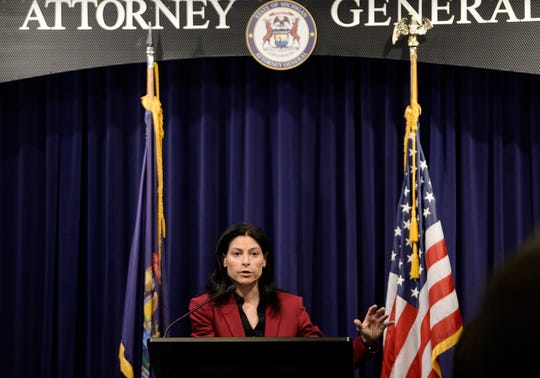 In another case, the attorney general recently issued guidance that Michigan’s sensible new A-F school grading law is in violation of federal education guidelines. In an attempt to skirt the framework, the state Department of Education asked Nessel for advice and counsel in January, and she obliged.

Now department officials have an excuse to further delay implementation.

Finally, Nessel is considering whether the state Civil Rights Commission was correct to expand the definition of groups protected from discrimination. Last year, the commission decided to include sexual orientation and gender identity, even though the state’s Elliott-Larsen Civil Rights Act doesn’t specify LGBTQ individuals.

The commission wants Nessel to review an opinion from former Attorney General Bill Schuette, who last year said the panel overstepped its bounds under the law. Nessel, of course, disagrees.

“There are probably going to be times when I just have a fundamental disagreement on the legal interpretation of a particular law, and I will tell you now, this is one of those times,” Nessel said.

There are valid reasons for expanding the civil rights law, but that must be tackled through the Legislature, which authored the act in the first place.

Republican lawmakers frustrated with Nessel’s actions don’t have much avenue for recourse, other than potentially messing with her budget. Pushback is most likely to come from impacted parties, such as the faith-based adoption agencies, in the courts.

In the meantime, Nessel should stay in her lane.