Editorial: Stick with the tunnel for Line 5 solution

"The governor's job is not to enable a radical environmental agenda, but to protect the lakes."

Editorial: Stick with the tunnel for Line 5 solution

Protecting the Great Lakes while ensuring a steady supply of energy between Michigan's two peninsulas, and doing so without burdening taxpayers, should be the objective of a solution to the concerns about the Line 5 pipeline. 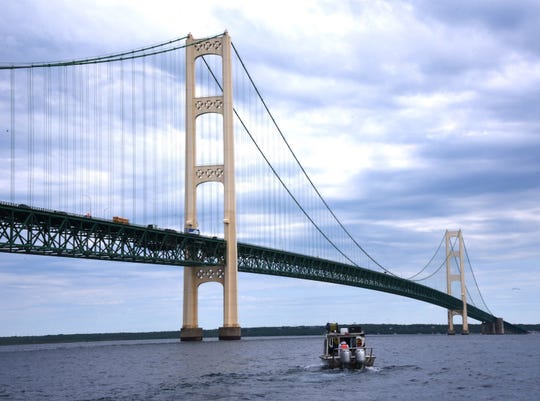 Oil pipeline operator Enbridge moves under the Mackinac Bridge on their way to inspect their controversial Line 5 under the Straits of Mackinac Wednesday, June 8, 2016. Using an autonomous underwater vehicle and a roving underwater vehicle over several days, the entire five-mile-long pipeline, which rests on supports along the bottom of Lake Michigan, will have been covered by both sonar and visual means. (Photo: John L. Russell, Special to Detroit News, John L. Russell, Special to Detr)

Former Gov. Rick Snyder met all three of those goals in negotiating with Enbridge Inc., operator of the line that carries petroleum products across the Straits of Mackinac, to secure the pipes in an underground tunnel.

The deal Snyder struck requires Enbridge to dig a tunnel through the rock 100 feet below the lake bottom to contain Line 5 and other utility lines. Enbridge agreed to pick up the $500 million cost. It would be a major infrastructure project in a jobs-scarce region of the state, and it would also reduce to zero the likelihood of an oil spill into the lakes.

But new Gov. Gretchen Whitmer promised on the campaign trail to shut down Line 5, and she's allowing that ill-considered vow to get in the way of sound policy.

Whitmer teamed with Attorney General Dana Nessel to block the work by declaring the tunnel unconstitutional.

Nessel's opinion, issued last week, is that the law approving the deal violates the state constitution because its title doesn't reflect what's actually in the bill. That semantical objection seems an iffy legal stance, considering that so many laws in Michigan bear lofty titles that have little connection to their contents.

But it was enough for Whitmer, who seized the ruling to order preparations for the tunnel work to cease.

This will surely end up in court. The Republican-controlled Legislature won't stand by while the new Democratic administration usurps its lawmaking authority, nor should it.

The law creating the new pipeline authority has already withstood one court test. Earlier this month, a Court of Claims judge rejected a request to invalidate the law just because of a provision creating six-year terms for members. The judge ruled members can only serve four-year terms, but that the rest of the law should stand.

In the meanwhile, Whitmer is obliged to offer an alternative for moving the products Line 5 carries. The pipeline transports 540,000 barrels of light crude oil and synthetic petroleum products a day. It also supplies 65 percent of the propane used in the Upper Peninsula, and 55 percent used statewide.

Without the pipeline, those products will be transported by train, truck or tanker ships, all of which are more risky to the lakes than is Line 5, which has never had a leak.

So far, Whitmer has offered no solution beyond "Shut it down."

That worked on the campaign trail, but falls short of responsible governing. Closing the pipeline without a viable alternative will drive up energy costs for all of Michigan. The governor is already asking residents to pay higher fuel prices to fix the roads; tacking on an entirely unnecessary energy surcharge simply to fulfill a campaign promise is an additional burden to those consumers.

Environmentalists want Line 5 gone to protect the lakes, but also because they believe cutting off petroleum supplies will hasten Michigan's transition to renewable energy. It won't. It will just make energy more expensive.

The governor's job is not to enable a radical environmental agenda, but to protect the lakes. Unless she has a better idea, she should embrace the sound solution that is already in place.