"Unless Nessel's team has evidence it hasn't disclosed, the charges should be permanently dismissed." 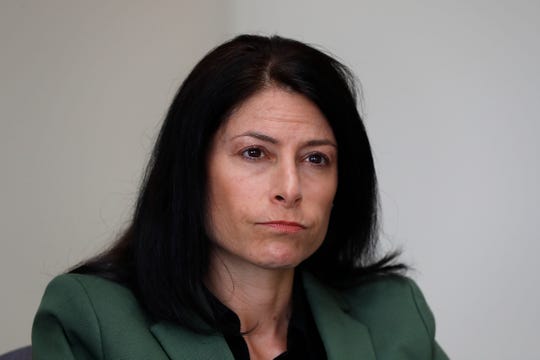 In this June 4, 2019, photo, Dana Nessel, Attorney General of Michigan, listens to a question from reporters in Detroit. (Photo: Paul Sancya, AP)

Justice for the victims of the Flint water crisis will not come by locking up good people. It will only be delivered by rebuilding the city's water system and making whole those who were damaged by its contamination.

That's why we applaud Attorney General Dana Nessel for dropping the charges against the eight remaining defendants, including Nick Lyon, the former director of the Health and Human Services Department, and Eden Wells, the state's former chief medical officer, both of whom had faced manslaughter counts.

We have been suspicious of the motives of the criminal probe since it was launched by former Attorney General Bill Schuette in advance of his failed gubernatorial run. It smelled of politics.

Certainly, tragic mistakes were made both in switching the source of Flint's drinking water, and in responding to the crisis once it was determined that lead had leached into the supply.

But did the officials who were set to go on trial — seven others have already pleaded no-contest to misdemeanor charges — act with criminal intent or negligence? That's a tough case to make against individuals who were placed in an extremely challenging position.

Schuette spent more than three years and $30 million on the investigation, which relied on private investigators and special prosecutors to build the case.

In hindsight, that money would have been much better used to hasten work on Flint's water lines, and to provide services to the victims, including the families of the 12 people who died in a Legionnaires' disease breakout suspected to be linked to the tainted water.

Nessel dismissed the charges without prejudice, meaning they can be refiled in the future, and called this a restart of the investigation, not a suspension.

She suggested criminal charges may emanate from a new probe, which is now headed by Solicitor General Fadwa Hammoud with help from Wayne County Prosecutor Kym Worthy, and that new individuals may be targeted.

Fadwa requested the dismissal because, she said, of problems with the evidence gathered by the Schuette team. She wants a fresh start.

How much more money does the state want to spend on this? Such costly investigations bring pressure to file charges, even if the evidence is scanty. Worthy said as much when she said the new prosecution team hoped to salvage the probe because of the "massive" amount that's already been spent.

A better approach would be for the state to cut its losses.

Unless Nessel's team has evidence it hasn't disclosed that more conclusively links the actions of Lyons, Wells and the other defendants to deaths in Flint, the charges should be permanently dismissed.