Editorial: Rep. Inman should step down

Fresh from rehab, facing federal felony charges and a recall campaign, Larry Inman returned to the Michigan House this month.

Editorial: Rep. Inman should step down

If you elected a politician to represent your interests, and that politician checked into rehab for drug addiction while facing charges from a federal grand jury, would you expect him or her to have the audacity to walk back into the office like nothing happened? That’s exactly what Republican Rep. Larry Inman did.

Fresh from rehab, facing federal felony charges and a recall campaign, Inman returned to the Michigan House this month with the intention of completing his two-year term representing Michigan’s Grand Traverse County. He is in his third term and term-limited. 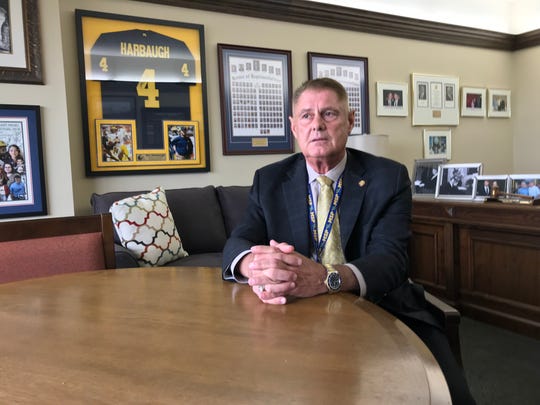 Inman, who lives in Williamsburg, said he got hooked on painkillers after a string of surgeries he had in 2017 and 2018.

Opioid addiction is no joke, and we’re glad he's on the other side of it. But we’re frankly surprised to see him back. Battles with drug addiction aside, Inman’s got a lot of other challenges to distract him from the people’s business.

He pleaded not guilty to charges of extortion, bribery and lying to the FBI after being indicted  by a federal grand jury last May for allegedly selling his vote on a controversial prevailing wage initiative in 2018.

In a text to a union representative, Inman indicated that 12 representatives had agreed to trade "no" votes for $30,000 each to support their campaigns, according to the indictment.

House Speaker Lee Chatfield, R-Levering, has said he has no idea what 12 representatives Inman referenced, and that he has sometimes “proven delusional.”

Earlier this year, Inman's fellow Republicans booted him from the House Republican caucus, and Chatfield has called on Inman to step aside.

Yet he’s not taking the hint.

Whether the product of a drug-addled mind or just poor judgment, the charge Inman faces is a felony punishable by up to 20 years in prison.

He acknowledges that he sent the texts, and his lawyers are arguing that they are protected under the First Amendment. While he surely has the right to free speech, using that right to commit a crime forfeits his protections.

In a resolution calling for his resignation that passed by a vote of 98-8, Inman's fellow representatives said his alleged attempt to trade his vote was a disgrace and a stain on the legislative body.

Drug addiction is one thing. Federal felony charges are another. Either would be enough to shake constituents’ confidence in his leadership.

Inman has missed more than 80 votes since his indictment, while still collecting his $71,000 salary. Some of his constituents are mobilizing a recall campaign.

He ought to save himself the stress and resign.