Editorial: Impeachment will change nothing

Nothing will have changed, except the political divisions triggered by Trump will be deeper and more intense leading into the 2020 election

Editorial: Impeachment will change nothing

The House effort to impeach President Donald Trump has played out as predicted, with Democrats pushing the measure on a nearly straight partisan vote. Following the vote, the case goes for prosecution to the Senate, where Republicans will just as predictably acquit the president.

This should all be over in a month or so, and when it is, Donald Trump will still be president. Those who hate Trump will continue to see him as an existential evil. And those who love Trump will still defend him as the savior of the nation.

Nothing will have changed, except the political divisions triggered by Trump will be deeper and more intense leading into the 2020 election. 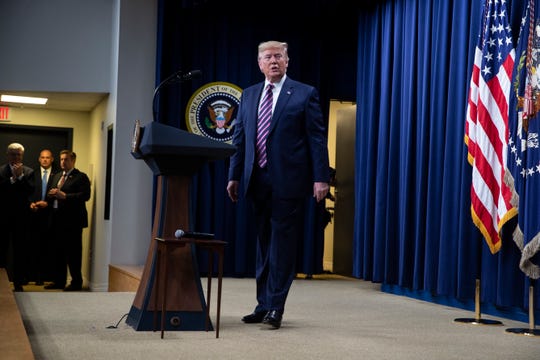 The impeachment proceedings against Trump have a Hail Mary feel about them — a long ball tossed to beat the start of the presidential campaign clock. They grow less from the specific incident with which Trump is charged and more from an accumulation of the many grievances Democrats have raised against Trump since Day One of his presidency.

Democrats had been looking for an impeachment opening they could sell to the public for three years, and Trump provided it to them with his phone conversation with Ukrainian President Volodymyr Zelenskiy. During the call, according to a rough transcript provided by the White House, the president asked Zelenskiy for help in investigating the Ukrainian dealings of Hunter Biden, son of Trump’s political rival, former Vice President Joe Biden.

The call also included references to U.S. military aid to Ukraine, which was held up briefly, and then released without the investigation Trump requested.

Democrats call what Trump did extortion and say in the formal impeachment articles that it was an abuse of presidential power. The absence of a quid-pro-quo demand from the president, however, casts doubt on whether what Trump did rises to an impeachable offense under the Constitution.

Testimony during the past month of House hearings in two committees run by Democrats did not add the evidence needed to build a convincing case against Trump. Much of it was second-hand accounts and the opinions and perceptions of witnesses. Even the initial whistleblower complaint comes from an anonymous source who heard of the conversation indirectly and did not testify before the House.

Zelenskiy says he felt no pressure from Trump or other U.S. officials. While nothing excuses the president’s behavior — it showed the arrogance, poor judgment and bully tactics we’ve come to expect from Trump — the case as presented in the House is not nearly conclusive enough to overturn the will of the voters.

The same goes for the obstruction of justice charge, which stems from Trump’s refusal to allow his top aides to testify in front of the House. It is far from the first time a president has claimed such privilege. Democrats chose not to use the tool they had available to them, namely the House’s subpoena power, to compel the testimony they desired. That failure diminishes the obstruction charge.

None of this is aimed at defending Trump’s ongoing, erratic and too often inappropriate behavior. It’s possible to be appalled by the president’s actions and oppose his forcible removal from office.

But impeaching a president is a serious matter. This is only the third time it will have happened. It should not have been handled in such a baldly partisan manner.

The risk is now impeachment will become just one more political weapon to be pulled out whenever the House and the White House are held by different parties.

As for the current effort to remove the president, Trump’s fate should be left to the voters next November. And that is most assuredly where the Senate will leave it.