Michigan Gov. Gretchen Whitmer is expected to make road funding the focus of her second State of the State speech, as she did last year.

Gov. Gretchen Whitmer can go into tonight's State of the State address with confidence that the voters of Michigan share her top priority — to "fix the damn roads."

It's a rallying cry that has obviously resonated. A poll released earlier this week finds Michigan's lousy roads are the No. 1 concern of voters, with 30% ranking deteriorating roads and bridges as their top priority, compared to 18% who are most worried about jobs and the economy, 7% education and 6% water and sewer infrastructure. 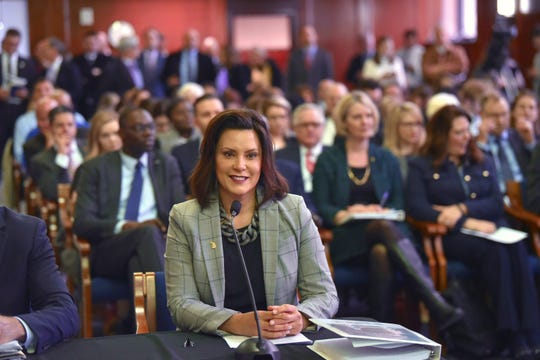 Whitmer is expected to make road funding the focus of her second State of the State speech this evening. (Photo: Todd McInturf, The Detroit News,)

Whitmer is expected to make road funding the focus of her second State of the State speech, as she did last year.

But while Michigan voters are upset about road conditions, it still doesn't mean they're willing to open their checkbooks to fix them.

The poll from the Glengariff Group, commissioned by the Detroit Regional Chamber, also reveals that 53% of voters believe the state budget is sufficient as it stands to do the necessary work.

That makes Whitmer's task tougher. And the reality should shape her strategy.

Coming out again, as she did last year, for a massive fuel tax hike won't work. Voters oppose higher fuel taxes, as do lawmakers on both sides of the political aisle.

Whitmer is said to be considering bond sales to fund road work — possibly as much as $2 billion a year. That may work, but it's a short-term solution. Bonds have to be repaid, and there's only so much the governor and lawmakers can cull from the General Fund to service the debt.

The survey does offer another opening, however.

While voters are opposed to a raising the fuel tax to finance work done by the state Department of Transportation, more than half said they'd likely support additional taxes if the resources went to local governments to meet the needs of their communities.

That's an approach recommended by the Citizens Research Council, which notes the success of local road millage requests.

It won't solve the entire problem, but it would make a real difference on the roads that residents use the most.

Whitmer hopefully will also propose tonight a restructuring of Act 51, which unevenly distributes current revenues to favor roads in less-traveled areas of the state.

And she could boost her cause by shifting the money raised from the 6% sales tax on fuel to the transportation department. Those funds, roughly $900 million annually, now go to schools and other spending.

Michigan voters would be more likely to commit more of their paychecks to fixing roads if they are certain the money they're already paying was going entirely to road work.

Whitmer must offer a plan that gets it right. Michigan has cheated on road maintenance for decades, and the result is a network of streets and highways that are among the worst in the nation.

The turnaround must begin tonight with the unveiling of Whitmer's latest plan.