Editorial: Give lakeshore residents leeway to save homes

This bill would ease the permitting process so homeowners could combat shoreline erosion more quickly.

Editorial: Give lakeshore residents leeway to save homes

Mother Nature has not been kind to homeowners along the Lake Michigan shore, and high water levels and storms have worn away bluffs and dunes, endangering homes along the Michigan coastline. The Legislature should fast-track a bill that would help residents save their homes, with less regulatory red tape.

Sen. Roger Victory, R-Hudsonville, is the sponsor of the legislation which passed out of the Senate last week. He introduced the bill after hearing from homeowners who were frustrated from dealing with the state environmental agency. 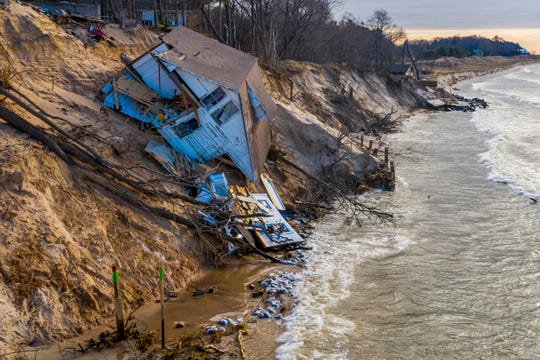 As some homes have started falling down bluffs, residents who own lakefront properties are having to make decisions quickly to prevent further damage. And they don’t have time for slow, bureaucratic decisions from state officials.

The bill would ease the permitting process so homeowners could combat shoreline erosion more quickly.

According to a Senate Fiscal Analysis, the bill would do the following:

►Specify that a permit “would not be required for construction of a temporary erosion control structure if certain conditions were met.”

►“Require a property owner to notify the DNR in writing of a removal of a temporary structure within 14 days.”

So property owners still would have to work closely with the state to shore up their homes, in addition to hiring licensed contractors. But hopefully they could halt the erosion before the damage becomes irreparable.

Other Great Lakes states, including Ohio and Wisconsin, have similar emergency protocols in place, Victory said.

State environmental officials say they have worked to issue permits more quickly to aid in erosion control measures, including placement of rocks or seawalls. Since October the department says it has issued 450 shoreline protection permits, with the majority being issued within a week of receiving an application.

That’s good to hear, but given the serious nature of the erosion, this legislation could offer homeowners some additional protection.