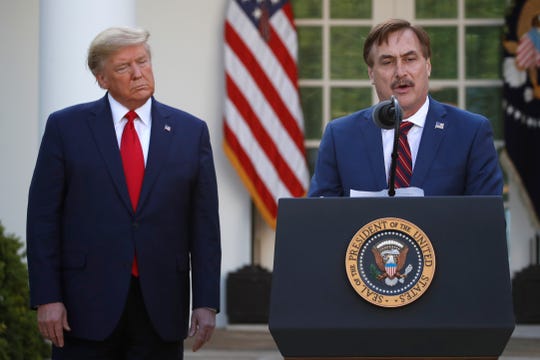 My Pillow CEO Mike Lindell speaks as President Donald Trump listens during a briefing about the coronavirus in the Rose Garden of the White House, Monday, March 30, 2020, in Washington. (Photo: Alex Brandon, AP)

I'm not a big fan of Fox News' Tucker Carlson — too smarmy — and the MyPillow left me unimpressed. But I applaud Mike Lindell, the pillow maker's CEO, for taking a stand against the mob.

Lindell is refusing to join cowardly corporations like T-Mobile in pulling his ads from Carlson's top rated nightly show.

Advertisers are being bullied by the left to abandon the Fox host for being conservative. It's a trend that started well before the Black Lives Matter protests.

Liberals have hounded companies not to advertise on conservative television and radio shows, despite their popularity with viewers and listeners, choosing to silence them with threatened boycotts rather than compete with them.

Lindell is having none of it, and other advertisers who were on the show because their ads delivered results should likewise signal their support for the free exchange of ideas.

Critics who have been telling us the U.S. Supreme Court is knee jerk conservative were hopefully paying attention Monday when the court issued a landmark ruling on gay rights. The justices ruled 6-3 that workers can't be fired for being gay in a case that originated with a Garden City funeral home. Chief Justice John Roberts and Trump pick Neil Gorsuch were the two conservative members who ruled in favor of expanding protections to LGBTQ employees.

Sinovac is reporting that 90% of volunteers in its Covid-19 vaccine study developed antibodies that help neutralize the virus. Relief may be coming soon.

Kid Rock should have given patrons who packed his Nashville bar protest signs, and he might have avoided the citation he received for violating hypocritical social distancing rules.

Remember when we were told face masks wouldn't help protect against Covid-19? Dr. Anthony Fauci, the Trump administration's virus front man, says it was all a bluff to keep the public from buying up masks needed by health care workers. Wonder how many lives that disinformation cost?