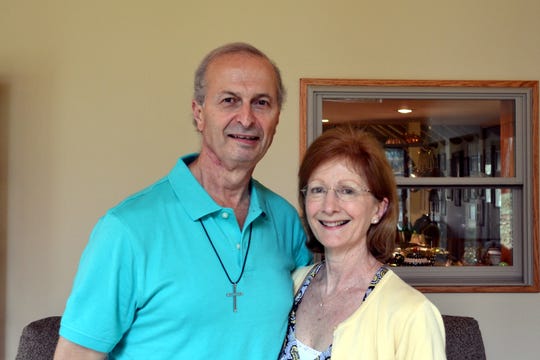 At the height of the COVID-19 crisis in April 2020, when most people in Michigan were isolated in their houses, Ken Godin and his wife Peggy made a critical decision. They left the safety of their home in Traverse City and relocated to Detroit for six weeks so Ken could receive crucial radiation therapy for tongue cancer at Henry Ford Hospital.

As a triathlon competitor in his 60s, Ken enjoyed doing 40-mile bike rides (daily, if weather permitted), swimming a couple miles each day and freediving with a monofin. Then came a different endurance test.

During a routine teeth cleaning, Ken’s hygienist noticed lichen planus, an irritated area that required close monitoring. Later, a biopsy confirmed tongue cancer and a partial glossectomy was done in Traverse City. But the cancer recurred in three years.

To perform the necessary tongue transplant and reconstruction, Ken’s local physician recommended Henry Ford head and neck cancer surgeon Tamer Ghanem, M.D., Ph.D. On March 3, Dr. Ghanem and Samantha Tam, M.D., M.P.H., performed the surgery. Radiation therapy would follow one month later. Unknown to anyone, it was the exact time the coronavirus would be at its peak.

“Ken was in an advanced stage of tongue cancer, and it was not advisable to wait for treatment. The cancer could have further advanced to an incurable stage,” says Farzan Siddiqui, M.D., Ph.D., director of Head and Neck Radiation Oncology at Henry Ford.

Moving to Detroit for six weeks was one of the most difficult decisions to make, says Ken. In addition to concerns about COVID-19, he and his wife would be far from their large group of supportive and prayerful friends and family members.

“The tipping points in our decision were the caliber of care and quick response to our needs and questions exhibited by the Henry Ford staff during the weeks immediately before, during and after my cancer surgery; and the multi-source expressions of trust in the skill and precision of Dr. Siddiqui,” says Ken.

At the Henry Ford Cancer Institute, cancer services remained open because the doctors and administrators were confident the enhanced standards would keep patients safe. For the initial consultation and follow-up appointments, virtual visits are offered at times and places convenient for cancer patients. In-person appointments are staggered to allow for social distancing.

Everyone — patients, visitors and staff — wears a mask and participates in screening prior to entering the facilities. After considering how patients entered the hospital and clinic, Henry Ford moved some services to ensure the most direct path to the treatment areas. Floors, chairs and surfaces are sanitized repeatedly throughout the day.

When Ken and Peggy registered at the apartment building on the Henry Ford campus, they were reassured. “Our first impressions dispelled all safety concerns. Staff were masked, the lobby was clean and cleared of unnecessary materials. The staff remained friendly, helpful and conscientious throughout our stay,” says Ken.

Most surprising were the relationships at Henry Ford. “While we knew the virus was on everyone’s mind, the atmosphere and our relationship with the staff remained welcoming, cheerful and personable. During a difficult time like this, the last thing you want to see is a bunch of unhappy, frightened people,” says Ken.

“Prior to COVID-19, the staff had been so friendly and properly tactile. Now — in the absence of handshakes, arm touching during conversation, and hugs — we relied on their eyes to convey the same friendliness and compassion we were accustomed to at Henry Ford,” he says.

Looking back, Ken comments on his journey. After the cancer diagnosis and initial shock, “I felt a peace and the sense God wasn’t done with me yet. Perhaps through this experience, I would have the chance to make a difference in someone else’s life. If nothing else, I planned to stay positive, maintain a sense of humor and trust God.”

Now, Ken has a future to make him smile: attend Mass, invite his family and friends to Sunday bar-be-ques, hold his newborn granddaughter, watch the kids swim, build a bonfire — and eat s’mores.

COVID-19 is not an excuse to delay cancer screenings