Story From Grosse Pointe War Memorial: Ford. Ferrari. 24 hours of racing. The true story to be told this fall in Grosse Pointe.

With the stakes and the octane high, Ford faced Ferrari in a race for the ages.

Ford. Ferrari. 24 hours of racing. The true story to be told this fall in Grosse Pointe.

With the stakes and the octane high, Ford faced Ferrari in a race for the ages. 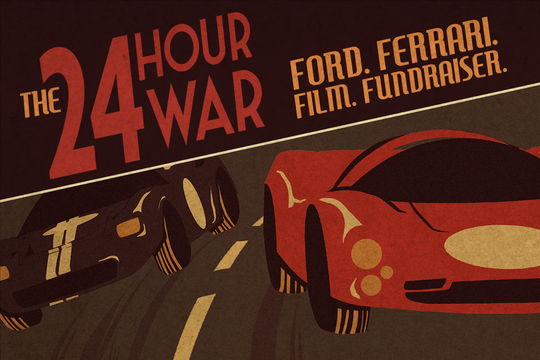 The War Memorial in Grosse Pointe has been well-known as the site of countless exciting events over the years, and that reputation is about to shift into high gear.

On Thursday, November 14, The War Memorial will host a screening of the pulse-pounding documentary The 24 Hour War, which recounts in vivid detail the events leading up to the epic 1966 24 Hours of Le Mans race – where automotive giants, Ford and Ferrari, dueled on the race track to reign supreme, while recalling the unforgettable era in which it took place. A 1960s-themed reception will precede the screening, where period-appropriate food and drinks will be served. Proceeds from this event will fund future veterans programming at The War Memorial.

Award-winning journalist and author A.J. Baime, whose book Go Like Hell: Ford, Ferrari and Their Battle for Speed and Glory at Le Mans inspired the documentary, will also be on hand to present the screening and host a Q&A session afterward. Attendees will receive a signed copy of Baime’s book as well as a voucher to see the upcoming film Ford v Ferrari, a dramatic retelling of the story starring Christian Bale and Matt Damon, at The War Memorial’s Patriot Theater this November. The action starts at 6 pm, and tickets are priced at $125.

Baime, who is a guest on The War Memorial’s monthly radio program and podcast, Inspired Heroes, speaks in-depth during the November episode about his passion for storytelling, especially as it applies to larger than life individuals and their audacious goals and ideas. Guests in attendance on November 14 will have the opportunity to experience first-hand Baime’s zeal for sharing the story of these two automotive giants, and how important their story is—especially in the Motor City. More information about Baime’s appearance on Inspired Heroes can be found at www.warmemorial.org/inspiredheros.

Those in attendance will step into an era of fast cars and big risks, where danger was synonymous with competition in the world of automotive racing. While today’s drivers are thankfully much safer, this night promises a thrilling look back at the preeminent battle of this bygone time, when the longest and largest race of them all saw a showdown between Ford and Ferrari: two giants of the four-wheeled world.

Ferrari’s scuttling of a proposed sale to the American giant in 1963 set CEO Henry Ford II on a mission: he and his company would compete against their European contemporary on the biggest stage possible. American ambition and ingenuity would be set on a collision course with traditional European dominance. It all came to a head at the 1966 24 Hours of Le Mans race, where all eyes were on the elite Italian automaker’s challenge from the rapidly transforming American icon and Ford’s new secret weapon: the GT40.

Proceeds from this event go toward supporting veterans programming at The War Memorial. The War Memorial recognizes military members, veterans, and their families through its Patriot Leadership Series, which includes public events such as the 9/11 Service of Remembrance; Veterans Day Breakfast; 1,000 Christmas Salutes; Our Community Salutes; An Evening of Red, White, and Blue; and an annual Memorial Day Service. The War Memorial’s Patriot Leadership series is supported by the Ralph C. Wilson, Jr. Legacy Funds of the Community Foundation for Southeast Michigan, which allows for recognition and honor to those who have served and those who gave the ultimate sacrifice.

While it is clear movies have the unique power to take us places we’ve never been (such as a racetrack during the 1960s!), there’s nothing like coming together with friends and neighbors to remind us of all that we value here at home. In Grosse Pointe, those looking to share in community, support our veterans and take in a pulse-pounding story have no shortage of options.

Tickets to these and other events, as well as more information about The War Memorial and its mission, can be found at WarMemorial.Org.

The War Memorial’s February and March arts and cultural programming