Due to cultural expectations, the signs of depression are often dismissed or overlooked.

Rather than becoming withdrawn, many men suffering from depression come across as irritable and aggressive.(Photo: Shutterstock)

“Real men don’t cry.” It’s a saying that’s still all too common in American culture. And as the traces of a male-dominated past still hang on, men continue to feel pressured to live large, be strong and keep their feelings of sadness to themselves. But too often, that means men aren’t able to face their feelings, which can lead to depression, risky behaviors or explosions of anger.

Depression is not a sign of weakness. It’s a common health condition that affects people of all ages and circumstances, and it can have serious consequences.

In fact, it’s normal to suffer an occasional bout of the blues—especially in reaction to losses, setbacks and disappointments. But when intense feelings of despair threaten to derail you and begin to interfere with work, family and friendships, depression may be why.

But knowledge is power — and healing. So here are seven things you should know about depression in men:

Instead of becoming sad or withdrawn, men who are depressed might come off as angry, irritable and aggressive. They might work longer hours, participate in risky or unhealthy activities or become abusive. They might even develop physical symptoms, including back pain, headaches, sleep problems or sexual difficulties.

A lot of men don’t like to discuss their feelings, so it’s no wonder depression among them is so easily overlooked. Trouble is, if you don’t come clean about what you’re experiencing, a doctor may have to guess to come up with an accurate diagnosis. That means depression may go untreated, which can have serious consequences.

Men with sexual problems are more likely to suffer from depression than those who aren’t experiencing challenges in the bedroom. What’s more, sexual dysfunction also tends to crop up as a side effect of common medications, including antidepressants.

4. Drugs may be the culprit.

In addition to causing sexual side effects, certain medications—both prescription and over-the-counter—can also cause depression. Alcohol, illicit drugs and even ill-timed caffeine can also contribute.

5. Seniors may be at higher risk.

Aging often comes with medical conditions and other stressors that are linked to depression. As men age, they may lose spouses, friends, income and even a sense of purpose. All of these factors can cause feelings of sadness.

6. Men are three to four times more likely to commit suicide than women.

Suicide is a real threat. If you’re struggling with difficult emotions, it’s important to seek help before feelings of despair become thoughts about ending your life. (Need help now? Call the National Suicide Prevention Hotline at 800-273-TALK (8255) or 800-SUICIDE.)

7. The diagnosis of depression doesn’t have to isolate you.

Once diagnosed, there are plenty of things you can do together with your doctor to successfully manage depression and start living life on your terms once again. In fact, lifestyle strategies, including exercise, sleep and social support can go a long way toward helping you feel better.

If you’re feeling depressed, overwhelmed or anxious, get the help you need before your symptoms get worse. Talk honestly with loved ones, friends and your doctor about what’s going on in your mind and body. There’s no shame in sharing feelings of despair … it could be the first step to helping you feel better.

If you’ve had thoughts about ending your life, reach out for help. Call the National Suicide Prevention Lifeline at 1-800-273-TALK (8255). 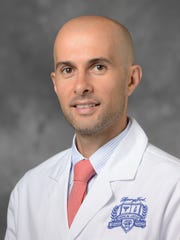 Ali Dabaja, M.D., notes that there are many ways to battle depression after diagnosis, including exercise and seeking social support. (Photo: Henry Ford Health System)

For tips on eating healthy, staying active and managing your health and wellness, visit henryfordlivewell.com and subscribe to receive a weekly email with our latest posts.

This story is provided and presented by our sponsor Henry Ford Health System.

Avoiding germs at the gym