Story From Lasik Plus: See the Motor City with fresh eyes as the city continues its renaissance

Detroit continues to inspire with old favorites and new attractions

Story from Lasik Plus 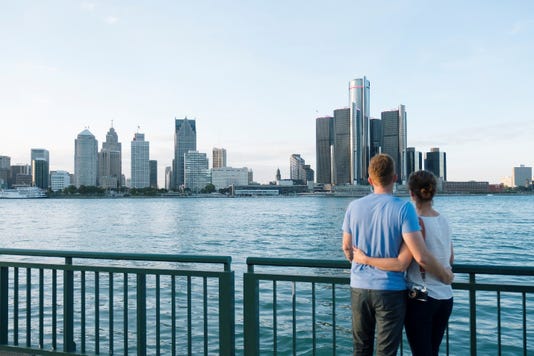 Vibrant and full of culture, the Motor City has always been – and continues to be – a city worth a visit, thanks to its stunning architecture and landmarks.(Photo: Getty Images)

“Detroit is going through a renaissance and it’s so alive and vibrant now,” said Todd Adelson, ophthalmologist at LasikPlus, which has locations in Northville and Shelby Township. “We go down there quite often, and it’s great to see Detroit filled with thousands and thousands of people.”

“It’s a very visual city that just keeps getting better and better,” agreed ophthalmologist Howard Adelson. “It’s important to see well so you can appreciate it all.”

Whether you’re a first-time visitor or a long-time Michigander, here are the city’s top seven most postcard-worthy sites to add to your list of places to visit.

In a city renowned for its architecture, nothing will knock your socks off more than the 1929 Guardian Building, a National Historic Landmark at 500 Griswold St. A bold example of art deco architecture and Native American themes, its decorative vaulted ceiling, elaborate Pewabic tiles and colorful Michigan mural inspire such awe that visitors tend to speak in hushed tones, as if they’re in a religious setting. You can explore the cathedral-style lobby, including a casual café and Pure Detroit shop, on your own – but to see the rest, including the grand ballroom on the 32nd floor, you’ll have to take a (free!) tour.

More than half of the 5.5-mile grand vision for the Detroit RiverWalk, which will eventually span from the Ambassador Bridge to east of Belle Isle, is complete and the results are splendid. Come for a special event or simply stroll, bike or Segway the wide promenade at your leisure; even dogs are welcome as long as they’re leashed. You’ll spy everything from freighters to locals fishing to children cavorting at the playful fountains and whimsical carousel at Cullen Plaza, where rides just cost a buck. Other highlights are Milliken State Park, a carefully created slice of wetlands; and the Dequindre Cut, a 1.35-mile trail below street level whose outdoor workout space includes six zones of equipment. Originally part of the Grand Trunk Railroad line, it’s alive with colorful murals and street art. 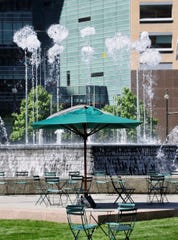 By any measure, Campus Martius has lived up to its vision of becoming “Detroit’s Gathering Place” since opening in 2004, well before the city’s intoxicating revival really took off. The park’s award-winning 2.5 acres include enthralling fountains and statues, a beach or ice rink (depending on the season) and a slew of free concerts, movie nights and other special events. Dine at the high-end Parc or grab something from a nearby food truck, then settle in for some serious people watching. It’s fun to kibitz while members of the Detroit Petanque Club play their bocce-like game, weekdays at noon.

A feast for the eyes (and all the other senses, too), historic Eastern Market is one of the city’s most enduring gems. The year-round Saturday market has more than 220 vendors hawking everything from fresh vegetables to homemade honey to dried fish, while on Sundays, crafters and artisans ply their wares through September. They’re grilling barbecue in front of Bert’s Warehouse, and way on the back patio, karaoke draws a dedicated (and talented) local crowd. Also worth a stop are Rocky’s, a super store for candy and nuts; the helter-skelter charm of Eastern Market Antiques; and the 1887 gourmet emporium Devries & Company. (Don’t miss the great deals on home goods on the second and third floors.) 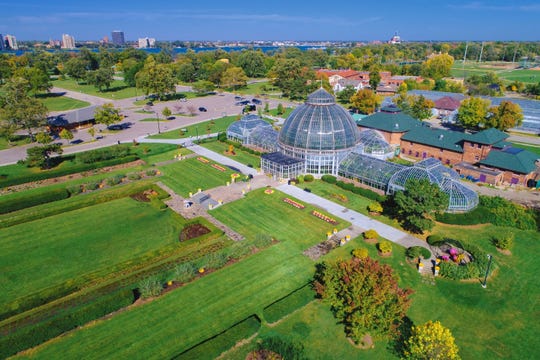 Belle Isle is indeed beautiful and offers a peaceful respite from the city. (Photo: Getty Images)

Belle Isle continues to improve since becoming a state park in 2014. Its 982 acres are dotted with historic attractions like the soaring Anna Scripps Whitcomb Conservatory, which houses an exotic and rare collection of plants from around the world; and the once-shuttered Belle Isle Aquarium, a beaux art-style treasure that is continually being renovated back to its 1904 glory. At the island’s western end, the ornate 1925 Scott Memorial Fountain is back and flowing in marble magnificence. Other highlights include the stunning stained-glass Gothic Room in the Dossin Great Lakes Museum and and the bird observation area at the laid-back Nature Center. More than 4 million people come each year, making Belle Isle the state’s most-visited park.

There’s no better place to give thanks for good eyesight than the Detroit Institute of Arts and its 65,000 works of art. You’ll think you’ve been magically transported to a European plaza when you duck into the stunning Kresge Court, but don’t let the old-world aura fool you – all the furniture contains power outlets so you can plug in your phone or laptop. But for a true respite, simply soak up the beauty while sipping a latte.

One of the city’s newest attractions, DTE Energy developed this space on Grand River Ave. to help spur growth in west-central downtown. It’s especially worth a visit after dark, when cutting-edge light exhibits positively glow with innovation. The spacious open lawn is home to myriad special events, including artisan markets, family-friendly tailgate parties and food and music festivals, and the glass-walled restaurant, Lumen, offers panoramic skyline views from its rooftop garden. Things stay hopping throughout winter in and around a massive, charmingly appointed heated tent.

Wherever you visit in the Motor City, your eyes are sure to remain wide open at its many wonders. Bring along your camera and a sense of adventure to come see all the sites, right in your own backyard. For optimal vision for your adventure, visit your local LasikPlus today.