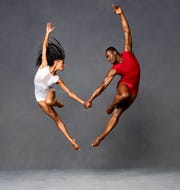 Alvin Ailey American Dance Theater, a favorite among local audiences, has been performing regularly at the Detroit Opera House since Michigan Opera Theatre’s second dance series in 1998. In addition to their 12th visit to the Opera House, this season the company marks its 60th anniversary, celebrating a history of pushing boundaries, defining modern dance and inspiring personal reflection.

Founded by Alvin Ailey in 1958, the company’s work celebrates the uniqueness of the African-American cultural experience and the preservation and enrichment of the American modern dance heritage. From works championing Civil Rights, like R-evolution, Dream, inspired by speeches from Martin Luther King Jr., to an ode to Southern gospel churches in Revelations, Alvin Ailey both explores African-American experiences and shares the culture with the larger world.

“These are really honest explorations of Alvin Ailey’s experience as a black person in this country,” said Debra Bernstein-Siegel, a dance professor at Oakland University and an MOT Trustee. “[They portray] the good, the bad and the ugly.”

Born in rural Texas in 1931, Ailey grew up in poverty during a period of intense racial segregation and violence against African-Americans, experiences that would later be reflected in his creative work. His mother moved them to Los Angeles when he was 12, where he was introduced to dance. He studied and performed with Lester Horton, founder of one of the first racially-integrated dance companies in the United States, where he trained in styles ranging from classical ballet to Native American Dance.

Following Horton’s death in 1953, Ailey took over the company and began choreographing his own works. When he founded his own company five years later, he had a vision of preserving the African-American cultural experience through modern dance.

Though Ailey himself choreographed nearly 80 works for his company, more than 90 choreographers have contributed to its repertory, which now includes more than 235 works.

“Alvin Ailey started the company to provide a place for his friends to dance, but it was always a repertory company,” Bernstein-Siegel said. “He was always bringing in white choreographers and brown choreographers, it wasn’t just his stuff. It transcends boundaries, it’s just about human beings dancing.”

Within the United States, Alvin Ailey’s accolades have reached far and wide. The founder received a Presidential Medal of Freedom and the Kennedy Center Honor for Lifetime Contribution to American Culture. He also received the NAACP’s Spingarn Award for an outstanding achievement by an African-American and the Samuel H. Scripps American Dance Festival Award for a lifetime contribution to American modern dance.

Internationally, the company has been an American ambassador since its earliest years. In 1962, Alvin Ailey was chosen to go on an extensive tour of the Far East, Southeast Asia and Australia as part of President John F. Kennedy’s progressive “President’s Special International Program for Cultural Presentations.” Since then, the company has taken numerous tours across the world, including a 10 country tour of Africa in 1967 and a tour of North Africa and Europe in 1970. In 1985, Alvin Ailey became the first modern dance company to go on a U.S. government-sponsored tour of the People’s Republic of China since the normalization of Sino-American relations. In 2008, a U.S. Congressional resolution designated the company as “a vital American cultural ambassador to the world.”

Bernstein-Siegel said the company’s global appeal is its exploration of humanity, beyond the African-American experience.

“Anybody who felt enslaved or under somebody else’s thumb can relate to that feeling,” she said. “They were ambassadors for America trying to be better, that we were trying to understand and be better human beings through dance."

As part of their 60th anniversary tour, the company commissioned their first two-act ballet, Lazarus, which celebrates the life of their founder with a work inspired by his own experiences. It examines Civil Rights through time and questions how much has changed or hasn’t changed since Ailey formed his company in the late 50s. It is the third in a series of works by acclaimed hip-hop choreographer Rennie Harris, following Home, about the club culture around AIDS, and Exodus, about police brutality and activism.

In an interview with the New York Times, Harris said Lazarus is about resurrection and Ailey’s continual influence on different generations.