Located in Rockwood, Pointe Mouillee is one of the largest freshwater marsh restoration projects in North America.

Located just 30 miles south of Detroit, the Pointe Mouillee State Game Area is one of the largest freshwater marsh restoration projects in North America. A half-million waterfowl pass through the region on their annual migrations.(Photo: Courtesy of The Michigan Wildlife Council)

ROCKWOOD – The best days of Bob Whitwam’s childhood were spent hunting and fishing with his dad at Pointe Mouillee State Game Area.

“It’s a waterfowl and wildlife paradise,” said Whitwam, now 51, who grew up on a canal just a mile from the game area.

Located in Rockwood, 30 miles south of Detroit, Pointe Mouillee (pronounced moo-yay) is one of the largest freshwater marsh restoration projects in North America. It consists of 5,190 acres of wetlands and open water on the Huron River where the Detroit River and Lake Erie converge.

Luckily for hunters and birders, it’s located in the Mississippi flyway, near the western edge of the Atlantic flyway, with hundreds of thousands of waterfowl frequenting the area during migration season.

Depending on the season, marsh birds, shorebirds, waterfowl, raptors and songbirds, pheasants, rabbits and deer can all be found there.

More than 300,000 diving ducks stop each year to rest and feed on wild celery in the lower Detroit River and western Lake Erie during their fall migration from Canada to the east and south, according to the Byways to Flyways driving tour of featured birding locations in Windsor-Detroit Metropolitan Region.

More than 75,000 shorebirds and 100,000 hawks also rest and feed in the region on their migratory treks. Bald eagles, black bellied plovers, glossy ibises, osprey and whimbrels are unique species that inhabit Pointe Mouillee throughout the year.

Region popular with hunters for centuries

The area was named Pointe Mouillee (meaning “wet point”) by French fur traders in the late 18th century. In 1875, a group of eight millionaire sportsmen purchased about 2,000 acres and formed the Big 8 Shooting Club; it was considered by many to be one of the most prestigious hunt clubs in North America.

The Michigan Department of Natural Resources Wildlife Division bought the land from the club in 1945 and designated it as a state game area. 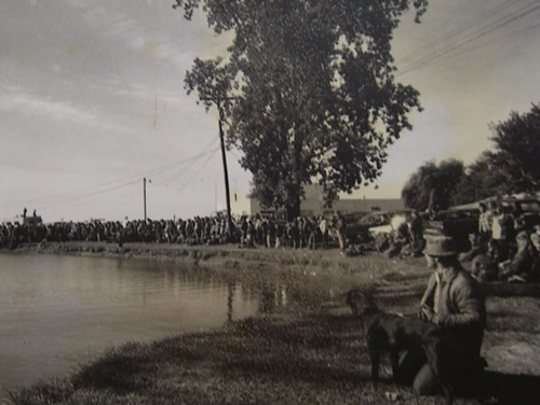 Since 1948, duck hunters have flocked to the Pointe Mouillee Waterfowl Festival. (Photo: Courtesy of The Michigan Wildlife Council)

“Fifty years ago, this area was nothing but open water. There has been tremendous work done over the years by many different organizations to make Pointe Mouillee the great wildlife area it is today,” said Matt Pedigo of the Michigan Wildlife Council, which is in the midst of a push to educate the public about the importance of conserving and managing the state's forests, waters and wildlife, and the sources of funding which make this possible.

Bob Whitwam’s father, Dick, has been hunting and fishing Pointe Mouillee since the 1950s. Dick Whitwam, now 77, built his own duck-hunting boats and showed his sons, Bob and Jim, how to shoot as soon as they were old enough to hold a gun.

“This is a premier spot for hunting, fishing and bird-watching. But there’s also a whole smorgasbord of wildlife that comes through the area to rest themselves and then move on,” Dick said.

“People come from all over to hunt here. I guided out there for 20 years, and people would come from as far away as Iowa and Pennsylvania because the hunting is so darned good,” said Dick Whitwam, a retired welder.

For decades, the Whitwams have helped organize the Pointe Mouillee Waterfowl Festival, which took place this year Sept. 17-18. Since 1948, the free festival has attracted thousands of visitors taking part in duck hunting, decoy competitions, the Midwest Goose Calling Championship and duck-calling contests where winners qualify for the championship in Stuttgart, Arkansas.

But the marsh wasn’t always so pristine.

A combination of dams on the Huron River and high lake levels in the mid-20th century caused much of the emergent marsh system to erode and disappear.

Zach Cooley, a DNR wildlife biologist at Pointe Mouillee, said extensive wetlands restoration and habitat work since the 1970s has dramatically increased the number of waterfowl and wildlife that inhabit the area.

“We hardly didn’t have any marsh left that wasn’t under water,” Dick Whitwam said.

Bob Whitwam, left, and his father, Dick, have seen huge improvements to Pointe Mouillee State Game Area through the years. Just 30 miles south of Detroit, the marsh is a resting area for hundreds of thousands of migrating birds. The Whitwams are longtime organizers of the Pointe Mouillee Waterfowl Festival each fall. (Photo: Courtesy of The Michigan Wildlife Council)

With the help of the U.S. Army Corps of Engineers and many conservation partners, a confined disposal facility (CDF) was constructed at the mouth of the Huron River; it contains sediment dredged from the harbors and shipping channels in the Great Lakes. The CDF – known locally as the “Big Banana” – also functions as a long, narrow barrier island for the marsh.

The DNR Wildlife Division has spent years creating a flourishing habitat that includes 24 miles of dikes enclosing over 3,500 acres. It rerouted streams and periodically draws down water levels inside the dike walls to help spur and regenerate vegetation.

“The DNR also plants seed corn, buckwheat and millet for the waterfowl and animals that live there, or for those that just rest here before resuming their flights north or south,” said Bob Whitwam, who now hunts Pointe Mouillee with his daughter, Anna.

Visitors – bird-watchers, paddlers, photographers and nature lovers – are welcome to wander the dikes on foot or bicycle, but not during hunting season, from Sept. 1 through Dec. 15.

The game area is also home to a handful of threatened or endangered species, such as the eastern fox snake, American lotus and the eastern prairie fringed orchid.

“The Pointe Mouillee restoration project has been wildly successful. It is a testament to what can be done through partnerships, agencies and conservation groups working together,” Cooley said.

Fees: There are not any fees to use the game area. Management of the game area by the Michigan Department of Natural Resources Wildlife Division is paid for by hunting license fees and Pittman-Robertson funds.

Directions: From I-75, take South Huron River Drive east to its end at Jefferson Avenue. Turn north onto Jefferson Avenue, then turn east onto Campau Road. Follow the winding road to the parking area.

This story is provided and presented by our sponsor The Michigan Wildlife Council.