Hunting and fishing supports more than 70,000 jobs in Michigan and generates about $5 billion annually for the state.

Angling for a better Michigan economy

Many Michigan businesses depend on fishing to survive, including the bait shops, restaurants and hotels near popular fishing locations.(Photo: Michigan Department of Natural Resources)

Spring is an exciting time of year for Michigan fishermen, aka anglers. Now that the ice has melted for the year, anglers are switching gear and starting to head out for open water to their favorite fishing holes to spend time with friends and family taking in the fresh air, making memories or enjoying the tranquility of time spent on a solo trip to the local creek.

But there’s a whole lot more for them to feel good about than just casting their lines for the first time of the season: They’re helping boost the state economy. Michigan residents who enjoy hunting and fishing spend more than just their time in the woods or on the state’s waterways – they spend their money. And the Michigan economy counts on those dollars. 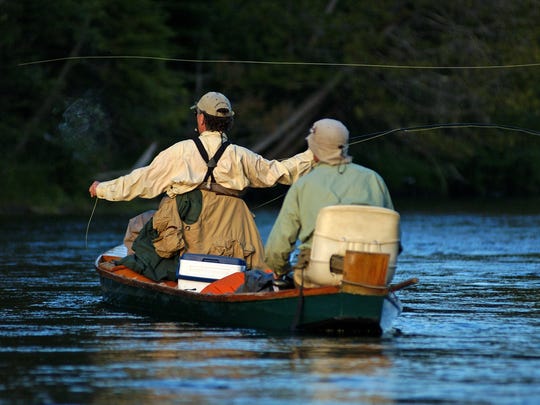 Fly fishing on the Au Sable is big business in the northern Michigan city of Grayling. The local economy largely depends on anglers. (Photo: Michigan Department of Natural Resources)

It all adds up, and those expenses benefit a wide range of businesses throughout the state that depend on that money to survive.

“Many Michigan cities rely on fishing and hunting dollars to stimulate the economy,” said Marc Miller, regional initiatives deputy at the Michigan Department of Natural Resources. “In Grayling, for example, fly-fishing on the Au Sable River is a significant part of the local economy. Grayling is a gateway to the Au Sable, and many businesses and entrepreneurs are capitalizing on that important heritage and connecting with visitors.” 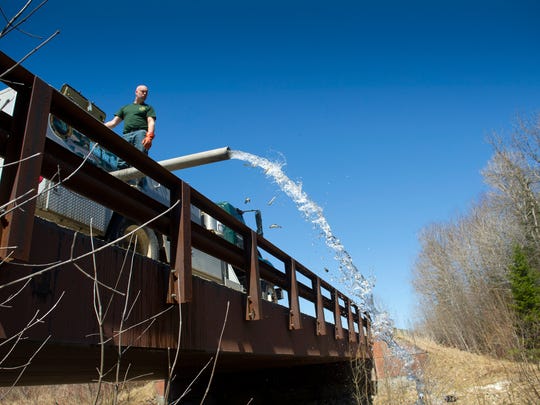 Money derived from fishing license purchases in Michigan goes directly into conservation projects, such as this fish stocking operation in the Au Sable River. (Photo: Michigan Department of Natural Resources)

But it’s not just Michigan cities that are courting hunting and fishing devotees. Miller said he’s seen a trend in recent years of the state’s natural resources figuring prominently in the recruitment strategies of Michigan-based employers.

“Businesses are using our public lands and trails to attract professionals to Michigan and keep our young people in the state,” Miller said. “They’re specifically highlighting our natural resources and the fishing and hunting opportunities within the state, which have a broad appeal across a wide range of ages, incomes and education levels.”

Of course, hunting or fishing licenses are at the top of the “must-buy” list for any Michigan hunter or angler, which works out great for statewide conservation efforts. In Michigan, management of the state’s wildlife and natural resources to ensure wildlife will be here for future generations is primarily funded through the purchase of hunting and fishing licenses – not state taxes.

“It’s one of those cases where a rising tide lifts all boats,” said Matt Pedigo, chair of the Michigan Wildlife Council. “When forests and animals are doing well, then we have all kinds of benefits, including clean water and fresh air. And that makes more people want to move to Michigan or stay here, which is great for the economy.”

The Michigan Wildlife Council is dedicated to increasing public understanding of the important role wildlife management plays in conservation of the state’s natural resources. This “user-pay, user-benefit” model means that hunters and anglers are the ones funding conservation and management of the wildlife they interact with. According to a 2016 survey, Michigan has the third highest hunter participation rate nationally, with 719,850 licensed hunters that year. That equated to $37.1 million in gross hunting license sales, from both those living in Michigan and those traveling from somewhere else, and a whopping $2.4 billion spent on travel-related expenses.

“If you buy a hunting or fishing license, you’re funding these efforts to manage our natural resources,” Pedigo said. “This money isn’t coming from state or property taxes. It’s coming from the people out there hunting and fishing, and we all get to enjoy the benefits of that funding. You may not think hunting and fishing affects you if you don’t engage in those activities, but they do. They take care of the rivers, forests, lakes and outdoor recreational areas we all enjoy.”

And thanks to the diversified efforts of Michigan wildlife agencies, that money also supports things like keeping deer from damaging farmers’ crops, stream-bank protection and providing technical assistance to local conservation commissions.

“These activities are wide-ranging, but include walking outdoors and fall-color driving tours,” Miller said. “And while buying gas, meals, supplies and specialized gear supports the Michigan economy, connecting with nature through wildlife-related activities and maintaining healthy lifestyles contribute immensely to our quality of life.”

Additionally, Michigan fishing activities drew over $11.2 million in federal funds for fish and aquatic habitat conservation from the state’s 1.2 million licensed anglers – the fifth highest number in the U.S.

“The importance of restoration and conservation efforts on public lands funded by hunting and fishing is immeasurable,” Miller said. “It’s a preservation of our natural heritage. The economic benefits of the enjoyment of those resources – the wages paid, the jobs created, the businesses sustained – is just a byproduct of that. But in terms of what it means to the communities that it helps, you can’t put a price on that.”