This is how bald eagles went from near extinction to Michigan conservation success story. 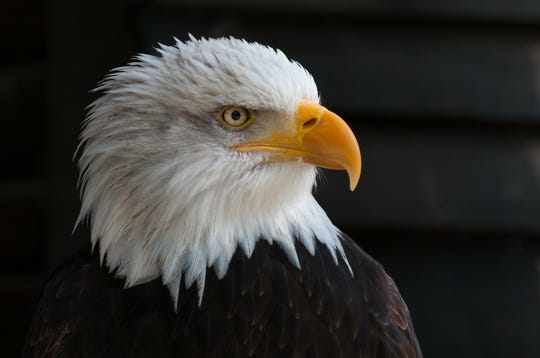 The success of Michigan’s bald eagle population wouldn’t have been possible without the effort of many groups working together, including Michigan conservationists, legislators, and hunters and anglers. (Photo: Pixaby)

With their steely predator’s gaze, massive wingspans and brilliant white heads, bald eagles are among the more striking members of the animal kingdom. And Michigan is home to a healthy population of them.

But these powerful birds of prey are still surprisingly fragile — so much so, in fact, that they were almost completely wiped out in the country that made them its national symbol.

“It’s unfortunate, but these majestic animals almost disappeared in the United States,” said Joann Van Aken, executive director for the International Wildlife Refuge Alliance. “They have a beauty and a gracefulness that’s captivated the imaginations of generations of Americans. Hopefully, their story is one that we’ll be telling for a long time.”

That story wouldn’t have been possible without the effort of many groups working together, including Michigan conservationists, legislators, and hunters and anglers. 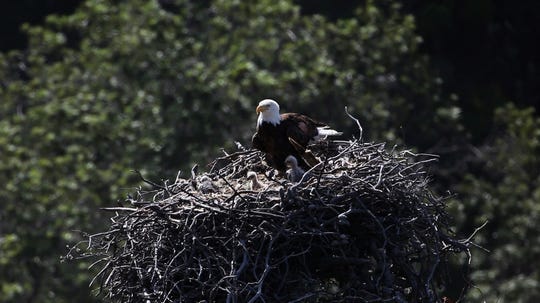 Today, there are about 800 nesting pairs of bald eagles in Michigan. (Photo: Pixaby)

Bald eagles have been the national emblem of the U.S. since 1782 and a spiritual symbol for indigenous populations for hundreds — if not thousands — of years before that. However, in the 1960s and ’70s, the nation’s bald eagle population plummeted due to pollutants in the waterways and widespread use of the pesticide DDT, which negatively affected the eagles’ ability to reproduce.

According to biologist Chris Mensing at the U.S. Fish and Wildlife Service, no bald eagles hatched in metropolitan Detroit from 1961 to 1987, primarily because of pesticide contamination.

But just decades after bald eagles were placed on the endangered species list — and decades after DDT was banned and pesticide cleanup began — their population is recovering and thriving throughout Michigan.

“Bald eagles are one of the great true success stories of not just conservation but the Endangered Species Act,” Mensing said. “A few decades ago, the population was down to just a small handful in northern Michigan, and now we’ve got eagles throughout the entire state.”

Today, there are about 800 nesting pairs of bald eagles in Michigan, all of which are federally protected under the Bald and Golden Eagle Protection Act and the Migratory Bird Treaty Act. And thanks to the Dingell-Johnson Act — which put a fee on fishing equipment in order to fund the state’s wildlife conservation and management activities — an estimated $10.7 million went to statewide conservation efforts last year, including bald eagle banding and monitoring work.

Additionally, fees from Michigan hunting and fishing licenses also go toward these efforts. Last year, they provided $61 million for activities such as invasive species remediation and habitat rehabilitation.

“It’s not well known, but the money needed for conservation and management activities does not come from Michigan’s taxpayers,” said Matt Pedigo, chair of the Michigan Wildlife Council. “It comes through the license and equipment purchases made by Michigan’s sportsmen and sportswomen. They fund conservation and management of many species that would not otherwise be possible, such as bald eagles.”

The Michigan Wildlife Council was created in 2013 to increase public knowledge of the importance of wildlife management and conservation, as well as the positive impact that hunting and fishing have on Michigan’s wildlife and natural resources. 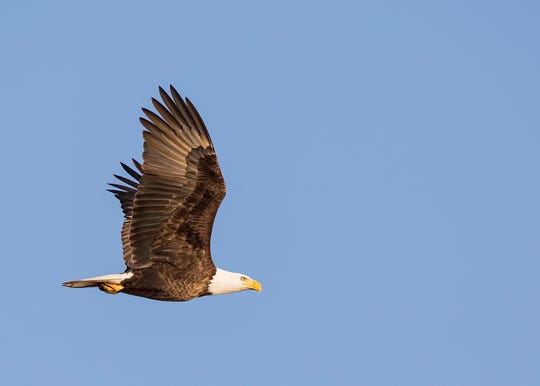 Mensing said Michigan’s bald eagle population is expanding in a lot of urban areas, where biologists wouldn’t normally have expected to see eagles.

Residents of southeast Michigan have watched that story unfold over recent years. Eagles have been spotted along the Detroit River corridor, within the watersheds of the Detroit River International Wildlife Refuge, at DTE Energy’s Monroe Power Plant along Lake Erie, and at Stony Creek Metropark.

“Seeing a bald eagle in the wild is one of the most thrilling experiences you can have in nature,” said Jennifer Braatz, a park ranger naturalist at the Detroit River International Wildlife Refuge in Trenton. “I see them all the time, and I still get giddy. It doesn’t matter how old you are; everyone becomes a kid again when you see a bald eagle.”

Braatz and Van Aken both take part in the Annual Eagle Tour event put on every year by the International Wildlife Refuge Alliance at the DTE Energy Monroe Power Plant. The event, which takes place in late January or early February, allows a few dozen lucky people to bear witness to a rare phenomenon.

“Because the water in Lake Erie doesn’t freeze where the plant’s hot water discharge occurs, it attracts bald eagles from all over the region who take advantage of the open water to hunt,” Van Aken said. “It’s not unusual to get between 100 and 300 eagles there, and it’s breathtaking to witness. To see all those white heads in the trees is such an incredible visual.”

The viewing takes place on the property of DTE Energy, but because space is limited, only 60 individuals are invited to the viewing. The alliance selects these individuals through a lottery system on its website. Sign-up opens on Thanksgiving and runs through Jan. 1.

“Thousands of people apply every year, which means that it’s really like winning the lottery for whoever gets a ticket,” Van Aken said. “Mostly it’s Michigan folks, but we’ve had people come from as far away as New Jersey to see this.

“It’s very humbling to see that much interest in people just wanting to see these beautiful creatures.”