Here’s a (far-from-complete) guide to attractions near the QLine's 12 stations.

This story is provided and presented by our sponsor.

Though many have already come to rely on the QLine as a way to get from Point A to Point B along the Woodward Corridor, others ride it to take in the sights. Here’s a (far-from-complete) guide to attractions near the streetcar’s 12 stations.

The northernmost stop is where the QLine is headquartered in a remarkably clean and shiny garage called the Penske Tech Center.

As the nearby Fisher Building (3011 W. Grand Boulevard) continues its $100-million restoration, Rachel Lutz is expanding her retail empire with two distinct stores in the art deco treasure: Yama, which offers modern women’s clothing, and a flagship location for her popular Peacock Room that’s three times as big as the original. Both are opening this fall.

More eclectic shopping awaits at the North End Collective (6513 Woodward), where four women-owned boutiques have transformed from successful pop-ups to brick-and-mortar operations. Stylish shoes for that hard-to-fit foot can be found at Roby’s Shoes (6518 Woodward), which carries sizes up to 13WW.

Also in the area, the Henry Ford Health System (2799 W. Grand Boulevard) is building the Brigitte Harris Cancer Pavilion as part of a 300-acre expansion and neighborhood redevelopment initiative that will include retail, housing and other mixed uses. Connected to the existing hospital by skywalk, it is expected to open in early 2020.

Tickets can be purchased on the streetcar, at each station, online at qlinedetroit.com and on the QLine Detroit Mobile App for iPhone and Android. You do not need to give the conductor the exact fare. Rather than change, you will receive a credit for future rides. (Photo: QLine)

A Platform redevelopment project called, fittingly enough, Baltimore Station will include restaurants, retail and 23 upper-floor apartments, a nice transformation of two buildings that were long empty.

Taking the train to Chicago for the weekend? This is where you’ll find the Amtrak Station at 11 W. Baltimore.

The Woodward Cocktail Bar (6426 Woodward) has the distinction of being the city’s oldest gay bar.

TechTown Detroit, headquartered in a landmark 1927 Albert Kahn building at 440 Burroughs Street, offers entrepreneurial services and workshops for small businesses. In less than 10 years it’s leveraged more than $120 million in start-up capital and served some 1,800 companies.

Located in a hundred-year-old house, Z’s Villa (42 Piquette) is a friendly spot for cocktails and American fare. Out back is a surprisingly spacious area for sand volleyball and horseshoes.

Visit the birthplace of the Model T at the Ford Piquette Plant (461 Piquette), the first building constructed by the Ford Motor Company in 1904. Public tours are offered Wednesdays through Sundays.

Planning a trip? Check out the travel wares at London Luggage Shop (5955 Woodward), a Woodward staple since 1946 that also offers premium business cases, pens and handbags.

Hop off the QLine at Ferry Street and you'll be in the heart of Detroit's cultural center. (Photo: QLine)

You’ve arrived in the heart of the cultural district. The crown jewel, the Detroit Institute of Arts (5200 Woodward), has more than 100 galleries to peruse, and admission is free for residents of Wayne, Oakland and Macomb counties.

Right across the street (and also free to visit) is the Detroit Historical Museum. Its newest exhibit, Detroit 67: Perspectives, has been well received for its examination of the city's July 1967 civil unrest.

That event is further scrutinized at the nearby Charles H. Wright Museum of African American History (315 E. Warren) in the Say It Loud: Art, History, Rebellion exhibition.

Had your fill of culture? The Shops at the Park Shelton (Kirby and Woodward) offer interesting boutiques in a beautifully restored former hotel turned luxury condo complex. Rachel Lutz has two shops here: Frida (which doubled in size in May) and the eclectic Peacock Room. Dining choices include Japanese and Korean dishes at Wasabi and farm-to-table freshness at the botanically themed Chartreuse Kitchen & Cocktails, named 2016 Restaurant of the Year by the Detroit Free Press.

Carhartt’s impressive flagship store at 5800 Cass is in an official National Historical Building. The wood used throughout is reclaimed lumber from houses torn down in Detroit, and each piece is stamped with the address. 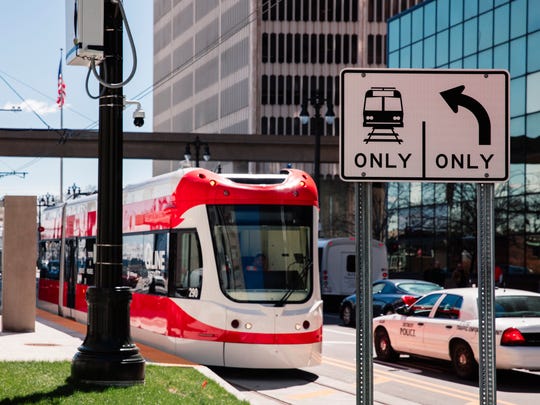 Here’s the home of Wayne State University and its 27,000-plus students. Spread over 203 acres, the campus includes many beautifully restored buildings from the 1800s and several lots where you can park for a nominal fee before jumping on the QLine.

The Detroit Artists Market shows and sells works by local artists at 4719 Woodward. The non-profit has reopened its front entrance in response to the neighborhood’s renaissance.

Also worth a visit is the N’Namdi Center for Contemporary Art at 52 E. Forest, which has four exhibition spaces, indoor and outdoor performance areas, juried shows, a gift and bookstore, a wine bar. Behind the gallery, in the same building, is the vegetarian restaurant Seva, offering a full bar, daily specials and the best sweet potato fries around.

The Potato Place (107 W. Warren) promises spuds as big as your head. It’s been open since 1991 and in a nod to modern times, offers olive oil instead of butter and gluten-free options.

This is a good stop for beer lovers. HopCat Detroit continues its popularity since opening in late 2014. It offers 130 craft beer taps, created-from-scratch food and a happening patio at the corner of Woodward and Canfield.

Nearby, Founders Brewing Company is building a 14,000-square-foot taproom at Charlotte Street in the lower Cass Corridor neighborhood. This will be only the second location for the beloved Grand Rapids-based brewery.

Do your tastes tilt more toward champagne? Browse the luxury goods at Shinola (441 W. Canfield), which employs some 400 people who craft and sell its high-end watches, bicycles, leather goods, pet accessories and journals.

Canfield is also the station for tried-and-true Woodward spots like the art deco Union Street (don’t miss the signature mac and cheese) and the Majestic, whose sprawling complex includes bowling, pool tables and live music in a large theater and more intimate shows in the Magic Stick.

With its colorful array of sneakers, tee-shirts and hats, the graffiti-decorated Bob’s Classic Kicks, 4717 Woodward, may just be the coolest shop in town.

The QLine has become a reliable way for passengers to travel along the Woodward Corridor. (Photo: QLine)

Home to the scrumptious concert hall of the Detroit Symphony Orchestra, the Max M. Fisher Music Center (3711 Woodward) also offers performances in the 450-seat Music Box – and has a great gift shop.

Whole Foods received a lot of attention when it opened in 2013 at 115 Mack, and has become a vibrant part of the community.

You’d never know it by the name, but the Peterboro serves up contemporary American Chinese food and exotic drinks. The patio is open weekends.  (It’s at 420 Peterboro, which explains the name.)

This is the spot to catch a Red Wings or Pistons game at the brand-new, $863-million Little Caesars Arena (2645 Woodward). That’s getting all the attention in the neighborhood, but there’s also the venerable Masonic Temple (50 Temple), where tours are available at 3 p.m. on the first and third Sundays of the month. Or come for a concert, theatrical performance, or to watch the Detroit Derby Girls battle fiercely on the top floor.

Just opened in January, Detroit is the New Black (1426 Woodward) is getting lots of buzz, and not just for its eponymous tee-shirts designed by owner Roslyn Karamoko. The 6,000-square-foot space also includes clothing, cosmetics, leather goods, candles and other wares from local designers, and serves as a community center with art exhibits and poetry slams.

For the latest in eyeglasses, check out Warby Parker at 1449 Woodward.

Right across the street from the splendid Detroit Opera House is a mini restaurant row. Angelina, in the former Madison Theater at 1565 Broadway, helped forge the way when it opened in 2008, and it continues to impress with its floor-to-ceiling windows overlooking Grand Circus Park and great Italian food.

Beacon Park, a new public space developed by DTE Energy, opened in July. Located at Grand River and Cass, it has 1.5 acres of green space for sports like badminton and whiffle ball on synthetic grass, a performance area, luminary features, and, coming next spring, a Belgian brasserie with rooftop seating called Lumen.

Chase away those Sunday night blues at Detroit Comedy Underground, which presents an evening of standup each Sunday at 8 p.m. at the Elizabeth Theater in the Park Bar (2040 Park).

Finally, it’s always worth a visit to Cliff Bells (2030 Park Ave.), a swank art deco jazz club that’s been a Detroit mainstay since 1935.

It’s exciting for those who remember when downtown Detroit was eerily quiet at night to see the crowds around Campus Martius. The urban park is a rousing success by any measure and a year-round destination.

The new Woodward Esplanade is a winding walkway that connects the QLine to the RiverWalk in style, with furniture and artwork and colorful planters brightening the way.

There’s much happening in this neighborhood, including fabulous shopping at two upscale athletic apparel retailers – the Nike Store, launched in 2016, followed by Under Armour this past April. Posh menswear can be found at both Bonobos (1417 Woodward) and John Varvatos (1500 Woodward).

Also nearby is Cadillac Square Park, home to the relocated Bagley Memorial Fountain, seasonal basketball courts and lots of places to nosh on the goodies from the food trucks often parked in the area. Cadillac Park is also where the Quicken Loans SportsZone's ComePlayDetroit program hosts leagues and events for young adults looking to compete or connect.

A few doors away, Avalon International Breads debuted its bright and airy Café and Bakery (1049 Woodward) in April with fresh-baked goods, sandwiches, salads and even alcohol.

Coming next fall is the eagerly anticipated Shinola Hotel, a 130-room boutique property at 1400 Woodward that will include 16,000 square feet of food, beverage and retail. The historic site was originally a hardware store and most recently housed a wig shop.

The southernmost stop on the QLine is where you’ll cross Jefferson to enjoy the many pleasures of Hart Plaza and the Detroit RiverWalk.

But first, check out the new Spirit of Detroit Plaza, another of the many Detroit projects (like the QLine) funded by private and public dollars. Woodward between Larned and Jefferson has been transformed into a pedestrian area of picnic tables, games and food trucks. What will happen to the space in cold-weather months has not yet been determined.

Raise a glass at the Grand Trunk Pub (612 Woodward), a cool bar/restaurant in a lovingly restored 1879 building. Originally a jewelry store and then a train station, the cavernous space has been in its current incarnation since 2006 – making it practically a granddaddy in these heady days of Detroit development.

Find us on social and let us know your favorite spots along the QLine!

This story is provided and presented by our sponsor QLine.