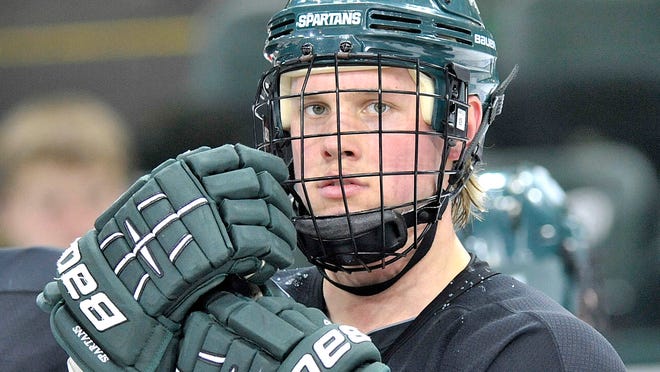 In this "Five Days of Hockey" series, The Detroit News will look at how the game intertwines with family, community and the desire to excel. Monday: Families keep hockey strong for ECHL's Toledo Walleye. Tuesday: Girls bonding over thrill on ice that is hockey.

The Spartans, experiencing a chronic power outage, searched for some offensive punch.

And Villiam Haag had a psychology class.

In several hours, at practice, coach Tom Anastos and the boys will work on that offensive stuff.

But for now, as the sun shined brightly on the frosty, snow-covered campus, Haag, a native of Gothenburg, Sweden, made his way to one of the courses that will contribute to the degree he prizes, advertising.

In several days, during the next Spartans game, the sophomore would score one of the biggest goals of his career, against the streaking Wolverines at Joe Louis Arena, and help lead the way to victory.

But right now, Haag was all about class.

On campus in East Lansing, Ann Arbor and other places in the state, some players are wise enough to know their lives will require more than hockey. And they fully exploit the opportunity it presents — higher education at an American university.

"They know very well of the benefits of playing in the NCAA today, probably more so than ever before," said Anastos, who for 13 years was commissioner of the Central Collegiate Hockey Association.

"And, while it's not a big explosion in numbers, you're seeing a slowly growing number of Europeans."

As Haag walks to class, Ben Winnett sits in Legal Research Library of the Law Quadrangle in Ann Arbor.

Within the Gothic walls and under the stately parapets, Winnett pores over some of the 500,000 legal tomes in the stacks, during his second year of law school.

The former Michigan forward from British Columbia, who scored the winning goal against North Dakota in the 2011 Frozen Four, is on his way to a Chicago law firm this summer before returning to obtain his juris doctor degree.

"I graduated undergrad in 2011 and took two years off, which I think for me was the perfect amount of time to maybe grow up a little bit and really get serious about school, but also not be too far removed from academia that I wouldn't remember how to sit in a library and study for 12 hours in a day," Winnett said.

Taking classes in finance, taxation of enterprise organizations, evidence and constitutional law all in one semester does that to you.

"I try to treat it as job in the sense that I'll leave my backpack and computer at school at the end of the day, so I just try to separate my school life from my home life," said Winnett, who credits the undergraduate days of long hours of both hockey and study with developing time management skills.

"And then, very rarely, I will take a day off on a weekend. But usually I put in six hours on a Saturday and maybe 10 hours on a Sunday preparing for the week."

On another part of campus, Zach Hyman understands he has a decent shot at the NHL.

The forward and fifth-round pick of the Panthers knows he has two more children's books in him.

"Education from an early age was always instilled in my family," said the senior, a Toronto native.

"That combination just put it above everywhere else."

In the seventh grade, a composition Hyman wrote was appraised as the best and won a prize.

He turned it into a children's book, "Hockey Hero."

"The Bambino and Me," a baseball book about kids believing in themselves, followed.

At Michigan, he majors in history, in part, because he likes the writing.

"Then you go upstairs and eat, and go home and do your schoolwork and relax," he said. "That is a busy day. It's not every day. But it's a lot of them.

It was Hyman's coach, Red Berenson, who helped make the mold for Canadian students playing hockey at colleges in the States, when he became the first Canadian player from a university in the United States to play in the NHL.

"I really feel lucky that I'm at Michigan," Berenson said. "I was lucky enough to come here a student athlete and, obviously, Michigan turned out to be the best four years of my life."

He says he makes that clear to his players as a way of presenting them with the possibilities.

"When I have kids here I really try to pass on to them how special it was, for me."

In Sweden, Haag grew up within the structure of a hockey club. He showed significant promise in the Vastra Frolunda Sports Association through the last stage, when selecting the roster for the top professional league is the crowning achievement.

"It was, all right, we don't have this place for you," Haag said of the culminating disappointment.

But he knew about an older player from Gothenburg, Viktor Stalberg, who had played with one of his brothers. Before Stalberg hit the NHL, Haag had heard, he went to someplace called Vermont, where they both play hockey and go to university.

It was the seed.

"I think that's where interest in college started," Haag said.

When the Muskegon Lumberjacks, a junior team in the Tier 1 United States Hockey League, needed a couple of players to fill in for two headed to the World Junior Championship, they called Frolunda, and Haag was on a plane.

In Muskegon, he met Joe Abdelkader, Justin's dad, an educator for 35 years and the housing and education coordinator for the Lumberjacks.

On a free day during a Christmas break, Abdelkader suggested they both drive to East Lansing and take a look around the campus.

It was about a week before Haag was to return to Sweden.

"I came down here with Mr. Abdelkader, and he showed me around," Haag said.

"No one was here except the coaches. And we just said hi, and I said yeah, I'm going back to Sweden. And I don't know how that all worked out, but they became interested. He wanted to show me around, and I think that started everything."

The Spartans eventually offered a scholarship.

"It just all became pretty interesting," Haag said. "Not only coming here, but just as a whole: Growing up as a person, living on your own and taking care of yourself became a big deal, too.

"If you compare, in Gothenburg, the university is not the town. I get the feeling that East Lansing is Michigan State University.

"In Gothenburg, it's just a few buildings. It's a big deal and you get a great education, but you are not really connected with the university in the same way."

As for his studies, Haag is maintaining a 3.1 grade-point average, exemplary for any student so thoroughly involved in activities outside class, let alone the daily routine required of intercollegiate hockey players.

"You just have to decide," he said, as a matter of fact. "You have to decide how much you want to do it, because there are a lot of distractions.

"As soon as I get an assignment, I try to stay on top of it. I look it over, try to start on it, so that I have done at least a little bit of it. And then, maybe once in a while, it becomes a little bit of extra amount of work, and it might be some late nights."

Haag said he believes he will return to Sweden after he graduates.

"You never know what's going to happen. You've just got to wait and see."

For Winnett, law school in the United States will lead him to stay and work here.

"I kind of thought that for me, with Michigan and Michigan hockey, those two connections packed the most punch for me, in the Midwest, as opposed to going back west to Vancouver."

All in all, Winnett said, it's important that serious hockey-playing kids about age 15 or 16 hear about the opportunity of college and factor that into their development, and that as they get older, they resist the sort of tunnel vision that tends to point only to the NHL, or bust.

"There certainly is life after hockey," Winnett said. "And college hockey can be a very valuable vehicle for that."