UM's Jim Harbaugh to be profiled on HBO's 'Real Sports'

UM's Jim Harbaugh to be profiled on HBO's 'Real Sports' 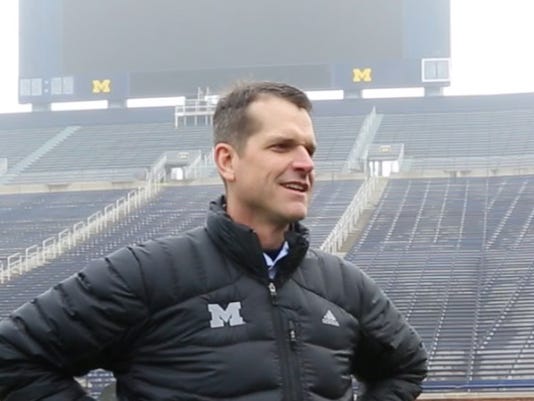 "It’s almost a compliment," said Jim Harbaugh about criticism from former players like the 49ers' Alex Boone, who said the coach drove them too hard. "And I bet that same player five or 10 years from now will really appreciate what was done."(Photo: HBO)

Michigan coach Jim Harbaugh will be profiled on HBO 'Real Sports' on Tuesday at 10 p.m. Reporter Andrea Kremer interviewed Harbaugh in Ann Arbor for the piece and according to a release from HBO will talk about his falling out with the San Francisco 49ers and how that brought him back to his alma mater.

Harbaugh was a quarterback at Michigan, and his father, Jack, was an assistant under legendary coach Bo Schembechler.