Tigers win but nearly done in by miscues

The Tigers are well aware that they messed around and almost gave a game away here Monday night.

Tigers win but nearly done in by miscues

Detroit Tigers’ Jose Iglesias, left, is tagged out by Minnesota Twins catcher Kurt Suzuki as he tried to score from third on a flyout by Victor Martinez in the seventh inning. Jim Mone, AP
Fullscreen

Detroit Tigers pitcher Joakim Soria pumps his fist at the final out as the Tigers beat the Minnesota Twins 5-4. Jim Mone, AP
Fullscreen 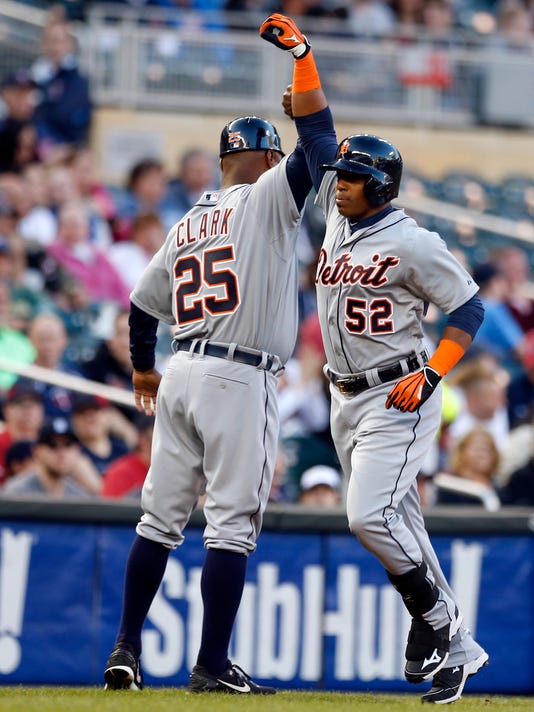 Yoenis Cespedes has a high-five for third base coach Dave Clark after his three-run home run in the first inning.(Photo: Jim Mone/Associated Press)

Minneapolis — You don't throw wins back and you don't make excuses for them. But the Tigers are well aware that they messed around and almost gave a game away here Monday night.

"We probably got away with one tonight, quite frankly," manager Brad Ausmus said. "We made some mistakes but fortunately we were able to get the win. You can't take that away."

The Twins very nearly did, though. The Tigers built a fast 5-1 lead and had David Price on the mound against the Twins but couldn't deliver a knockout punch.

Instead, in the first of a 10-game expedition through the AL Central, they won on points, barely, 5-4.

"We made four outs on the bases," Ian Kinsler said. "We had a bunch of chances to put them away and we couldn't get it done. But at the same time, we won the game and that's really all that matters."

The Tigers, continuing to binge on soft-throwing left-handed pitching, scored four runs in the first inning against Twins' Tommy Milone. A solo home run by Jose Iglesias and a three-run bomb to the bullpen in deep left center by Yoenis Cespedes did the damage.

"We had our little Cuban Connection win the game for us," Kinsler said.

They added the fifth run in the second and then squandered one scoring opportunity after another while the Twins kept chipping away Price.

"David battled his tail off," Ausmus said. "He didn't have the command he normally has but he kept finding ways to get outs. It was touch and go there for a while in terms of his pitch count but never gave in."

Price wound up pitching 6.1 innings, allowing three runs and six hits. It should have been good enough for a comfortable win. But the Tigers, as Kinsler said, had four runners thrown out on the bases — including one at home and one at third, both in the seventh inning.

"The base running," Ausmus said when asked what bothered him most. "Missing signs always bothers me more. When you squander opportunities, guys are trying. They are trying to drive in runs. That's going to happen. But we can't be missing signs."

The litany of blown chances:

* They had two on and nobody out in the fifth, and drove Milone from the game. But Cabrera killed the threat hitting into a double play (one of four by the Tigers).

*Cespedes led off the sixth with a double and never moved.

*Iglesias, who had three hits, led off the seventh with a triple. Cabrera walked. And there would only be one more hitter for the Tigers in the inning. Victor Martinez hit a fly ball to medium depth left field. Shane Robinson threw Iglesias out at home easily. Cabrera moved up to second on the throw.

"You have to try to score on that," Ausmus said. "We're trying to tack on a run. We knew Robinson has an accurate arm and he made a perfect throw."

J.D. Martinez was up, but Cabrera took the bat out of his hands. He mistakenly thought the Twins were ignoring him and he broke for third. He was called out, though it appeared third baseman Trevor Plouffe may have missed the tag. Replays, though, upheld the ruling.

*J.D. Martinez led off the eighth with a single. He, like Cabrera, mysteriously broke for second with the ball still in the pitcher's hand. He was out easily at second.

Meanwhile, the Twins kept chipping away.

"I am happy they gave me a four-run cushion or it's a different ballgame," Price said. "I guess I pitched good enough to get by, but I can get better."

Price, coming off a horrendous eight-run, 10-hit outing against the Yankees, wasn't his usual efficient self. It took him 92 pitches to get through the fifth. He threw more fastballs — and threw them firmer — than in any of his previous starts. His fastballs — two-seam and four seam — ranged from 93 mph to 96 mph.

He allowed two runs and four hits through six innings. He struck out six and walked two. Ausmus didn't hesitate to send him back out for the seventh.

He had given up runs in the first and fifth innings, and each time the Twins led off the inning with a double. Price seemed to wavering in the fourth inning, too. He walked Kurt Suzuki with one out and fell behind Robinson 2-0. Catcher Alex Avila came to the mound after the 1-0 pitch and pitching coach Jeff Jones came out after the 2-0 pitch.

Whatever they said resonated because Price quickly dispatched Robinson with three straight fastballs – 94, 94 and 96 mph.

"Price wasn't at his best but for that type of start not to be his best basically shows how great David Price is," Kinsler said. "It's nice to have him on the mound."

After getting Robinson to pop out to first to start the seventh, he gave up a double to Schafer and an RBI single by Santana to make it 5-3.

Enter right-hander Alex Wilson, who got Brian Dozier and Torii Hunter, throwing just four pitches to do so, to end the seventh.

Joba Chamberlain pitched the eighth and gave up a leadoff double to Joe Mauer. The fourth double by the Twins, leading to the fourth run. With two out, Chamberlain hung a breaking ball to Suzuki, who smashed an RBI single to left, making it a one-run game.

Closer Joakim Soria, making his third appearance in three days, gave up a leadoff single to Jordan Schafer. He went to second on a sacrifice. But Soria struck out Dozier on a 3-2 curveball and got Hunter to ground to third to end the game.

It was his eighth save.

"We couldn't put them away and the Twins kept hanging on," Ausmus said. "The game didn't have a real good feel to it for us. Fortunately in the end we were able to squeak by."