It felt like England against the world in. And that was nothing the Lionesses couldn't handle. 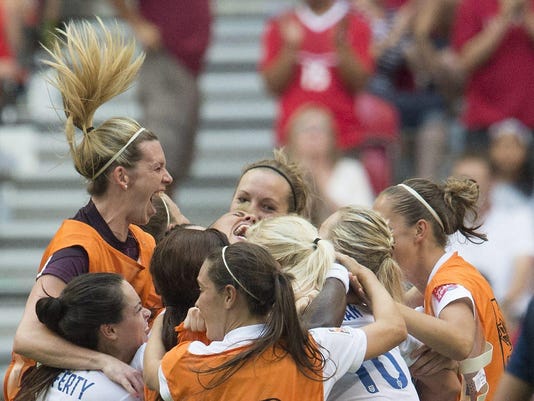 Vancouver, British Columbia — Lucy Bronze had never played in front of anything she could compare to that flag-waving, drum-banging, deafening Canadian crowd. Jodie Taylor had to laugh as she looked around BC Place to see a few overwhelmed English fans in that rambunctious sea of red.

It felt like England against the world in this World Cup quarterfinal.

And that was nothing the Lionesses couldn't handle.

Taylor and Bronze scored in the shocking first 14 minutes, and England eliminated Canada from its home World Cup with a 2-1 victory Saturday.

"To play against a crowd that was basically about 54,000 of them against us and only 10 for us, was an unbelievable experience," said Bronze, whose header turned out to be the winner. "It's something that we'll probably never experience again. Credit to the Canadian fans, because it was hard to play in. We had to dig deep to get past that."

The Lionesses dug to the depths of their training and spirit to survive, even navigating a second-half goalkeeper change to secure their nation's first trip to the semifinals in the women's tournament. With two early strikes and tenacious defensive play, England crushed the hopes of a host nation hoping to celebrate Canada's first World Cup title on this same field next month.

Instead, England will face defending champion Japan in the semifinals in Edmonton, Alberta, on Wednesday — which also happens to be Canada Day.

"Game by game, this team has more belief," said Taylor, a surprise choice for the starting lineup. "To be playing the hosts in front of 54,000 Canadian fans is quite a brutal environment to be in. We weathered the storm and dug deep, and we have every belief we can keep going."

England's surge to the quarterfinals raised attention to the perpetually overlooked Lionesses, and the strong backing of Prince William further increased the spotlight. With this gritty victory, they're two wins from their first World Cup title — something their male counterparts haven't won since 1966, as any English football fan knows.

"We're … now the third England team to get to a semifinal, joining the '66 and that '90 group," England coach Mark Sampson said, the meaning clear in his voice. "I've never been in a stadium as loud, as passionate for their team as that was. They couldn't have pushed us any further."

Christine Sinclair scored in the 42nd minute for Canada, which had given up just one goal in the entire World Cup before giving up two more just three minutes apart.

After Taylor scored the opener on a horrible turnover by Lauren Sesselmann, Bronze added an impressive long header to build a lead that England never relinquished.

Although Sinclair got one back before halftime, Canada struggled to generate many good chances in the waning minutes of the scoreless second half. The drought slowly crushed the crowd of 54,027 supporting a plucky, defense-minded team that never scored more than one goal in any World Cup match while reaching its first quarterfinal since 2003.

"I'm proud of my girls," Canada coach John Herdman said. "They give you everything. It just wasn't good enough tonight. The dream is over. It's not how we imagined it to end."

England wasn't even bothered when Siobhan Chamberlain replaced goalie Karen Bardsley early in the second half after Bardsley complained about a problem with her right eye. Chamberlain is on her third World Cup team, but got about 30 seconds to warm up for her first appearance.

"Well, they can't start the game without me, so it was pointless to be rushing," laughed Chamberlain, who believes Bardsley has an infection that caused her eye to swell.

After Canada opened the quarterfinal with an impressive push, Taylor pounced in the 11th minute when the ball got away from a falling Sesselmann. Taylor dodged another defender and tucked in the first goal for a 29-year-old forward and Oregon State product who only made her senior team debut last year.

With the crowd still in disbelief, Bronze doubled the Lionesses' lead by heading Fara Williams' long pass off the crossbar and in for her second goal of the World Cup.

England's bench players leaped onto the field in elation. The crowd was somnolent until a dropped ball by Bardsley led to the 155th international goal by Sinclair, the British Columbia product in her fourth World Cup.

Sophie Schmidt had perhaps Canada's best late chance in the 83rd minute, but put a low pass high over England's net. Sinclair put a header well wide off a corner kick in the 90th minute, and England ran out the clock on a dramatic victory.

"You could just cry, right?" Herdman asked. "We knew that if we take this game, we've got a real shot at going all the way through. We hadn't written the script to be two-nil down that early."

Japan 1, Australia 0: At Edmonton, Alberta, Mana Iwabuchi scored during a scramble in front in the 87th minute for defending champion Japan. The goal came after Japan spent much of the second half generating a majority of the pressure in the Australian end. Aya Miyama's corner kick from the left corner was blocked in the penalty area, but the ball bounced directly to Azusa Iwashimizu, who got off a hard shot at the net.

The shot was blocked by goalkeeper Lydia Williams, and the ball squirted to the left, where Iwabuchi kicked it into the open side. Iwabuchi had fresh legs after subbing in at the 72nd minute in place of Shinobu Ohno.

Japan will face England or Canada in the semifinals in Edmonton on Wednesday.