Alyssa McBride on coming forward: 'I did it for future Spartans'

Former MSU softball player explains in a letter why reported incidents where she was hit by assistant coach with pitches.

Alyssa McBride on coming forward: 'I did it for future Spartans' 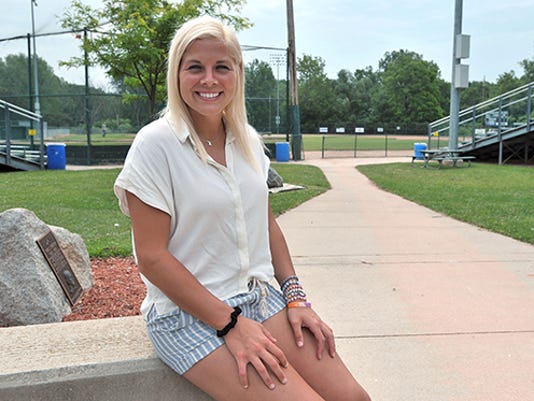 East Lansing — Calling Michigan State the "best school in the nation," former softball player Alyssa McBride responded Friday to the independent investigation that cleared her coaches of any wrongdoing amid allegations they intentionally threw at her in batting practice.

"It has taken so much courage to share my story," McBride said in an open letter, provided exclusively to The Detroit News. "I did it for the former players that have shared similar experiences to my own and were too afraid to stand up for themselves."

On April 28, after a blowout loss to Notre Dame, McBride made negative comments to a reporter about her time at MSU, and those comments got back to head coach Jacquie Joseph.

After a meeting with Joseph on April 29, McBride was hit by a pitch in batting practice by assistant coach Jessica Bograkos before that day's game at Central Michigan, and then again before the season finale May 3 against Maryland at home.

Team manager Ben Hayden said he overheard a conversation between Joseph and Bograkos about "hitting" a player, while on the bus to Central.

After McBride was hit the first time, Hayden told her what he had heard. After the May 3 incident, a Michigan State Police and MSU Police investigation was launched. The findings were sent to prosecutors in Isabella (CMU) and Ingham (MSU) counties, with both prosecutors declining to file charges.

Last week, a 98-page report from Miller Canfield — the law firm hired by MSU to run an independent investigation — cleared the coaches of wrongdoing. McBride and Hayden weren't interviewed by investigators; McBride's refusal, along with her stepfather, Mike Gillette, was on advice from counsel, while Hayden said he was never contacted, contradicting what investigators said.

Gillette and wife Amy, McBride's mother, have not ruled out filing a lawsuit against MSU.

Here's the complete letter — unedited by The News — from McBride:

"First and foremost, I want to say that I truly love Michigan State University and I believe that it is the best school in the nation.
My parents have raised and instilled in me at a very young age to always demonstrate the utmost integrity and to stand up for what is right, even if I stand alone.

"It has taken me so much courage to share my story and do the right thing by telling the truth. Personally, I have nothing to gain from sharing my experience to the world. I already used my four years of eligibility. I am getting a degree from one of the top universities in the country. I have been a four year starter, a three-time Academic All-Big Ten Scholar, and led the team in batting average this year.

"I did it for the former players that have shared similar experiences to my own and were too afraid to stand up for themselves. I didn't come out sooner because I, too, was afraid of retaliation and the consequences of telling the truth. I did it for my teammates that are currently playing on the team for fear that this could happen to them. Lastly, I did it for future Spartans and division one college bound softball players around the country, so that they were aware of the mistreatment and abuse that goes on within this program.

"As for my relationship with the manager, Ben Hayden, we have always been close friends, and that is all it has ever been. Just as he was with many other players on the team. I was also really close with Bryan Rourke, the former manager, as were many other players on my team. Being that we are away from our families and unable to reach out to them, many college athletes confide in their managers because they are a part of the athletic program.

"I am very thankful for my experience at Michigan State because they have provided me an excellent education.

"As I graduate and go out into the workforce, I will take these experiences with me and hopefully be an advocate for future athletes.