Tom Izzo already had a good start to Michigan State's 2016 basketball recruiting class, but on Friday he landed another blue-chipper. 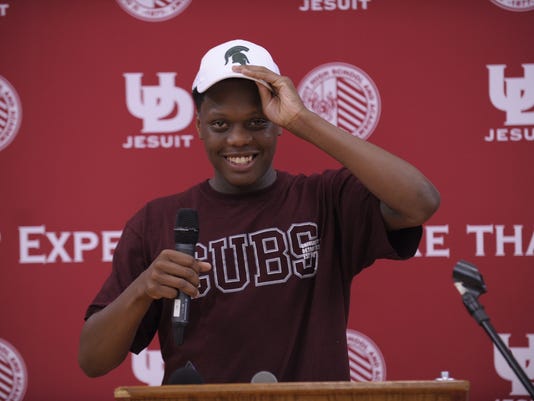 Detroit — Cassius Winston decided to stay close to home, and as a result, Michigan State is putting together a recruiting class that could end up being one of Tom Izzo's best while positioning itself as a national contender once again.

Winston, the 6-foot-1, 185-pound point guard from U-D Jesuit, made it official at a school pep rally on Friday, putting on a customized Michigan State hat complete with his nickname and number on the side that read, "Caz 5."

"It's been a great experience and one of my dreams (has) come true," Winston said, "to be able to play at the next level and play at a very high level."

The Spartans, fresh off the seventh Final Four appearance in Izzo's career, are counting on that from a player who is ranked in the top 30 by all of the major recruiting services. But what it adds to an already impressive class and what it could mean down the road is potentially enormous.

Cassius Winston announces at U-D Jesuit pep rally that he will play basketball for Michigan State.

After Winston's commitment, 247sports.com promoted the Spartans' 2016 recruiting class to No. 1 in the nation, followed by Florida State, Connecticut, Virginia and UCLA.

Winston, Langford and Ward were joined by Miles Bridges last Saturday on their official visits to Michigan State and took numerous pictures together. Bridges is the No. 12 player in the nation, according to 247sports.com, and has narrowed his list of schools to Kentucky and Indiana along with the Spartans.

"That's my guy," Winston said of his AAU teammate. "I let him know (about my decision) but really his decision is up to him, so whatever he wants to do I hope and pray that it's the best for him. If there is the opportunity for him to play with me I would love that but if he doesn't I wish the best for him."

Bridges, a 6-7 forward from Flint who plays at Huntington (W.Va.) Prep, is visiting Kentucky this weekend and has said he will announce his decision on Oct. 3.

Winston said he knew what his decision would be after his visit over the weekend. He was able to play with many of the current Spartans as well as former players, including Draymond Green. It also gave him a chance to get to know his fellow commits.

"Nick is from Ohio so we play EYBL," Winston said. "I just met Josh this weekend but he is a great guy, a cool kid and I'll love to be playing in the backcourt with him."

The commitment from Winston was the end of four years of work from Izzo and his staff. Winston recalled his freshman year when Izzo first showed up at the U-D Jesuit gym, causing quite the stir with his presence.

The MSU coach was a constant at Winston's games from that point forward and when Winston called Izzo on Thursday night, it was a special moment.

"He was really excited," Winston said of Izzo's reaction. "Loyalty is a big thing in my family and, if you stay loyal to me, I'm gonna stay loyal to you. So that definitely was a big factor in the decision.

Winston said he was glad to get the recruiting process completed so he could focus on his senior season. He is coming off leading U-D to back-to-back appearances in the state semifinals and averaged 24.2 points, 5.8 rebounds and 7.2 assists during his junior season.

His high school coach, Pat Donnelly, said Winston has been working on improving his shot, but his ability to distribute the ball is what sets him apart.

"People love to play with him," Donnelly said. "You saw that on the AAU circuit and certainly with our guys. They love being on the floor with him because he's so unselfish. He delivers the ball at the right time to the right spot and does make everybody better."

And Donnelly added, Michigan State will be getting more than just a good player.

"I sat down with him the other day and talked with him about how much I appreciated him in our program," Donnelly said. "Not because of his talent but because of the kind of kid he is. As talented as he is, he's very humble, liked by everybody and that's not common. … He is one of the nicest kids around."