In second start back from an oblique strain, rookie left-hander kept White Sox hitless and baffled in limited outing.

Detroit Tigers pitcher Daniel Norris works in the first inning against the Chicago White Sox. Norris pitched five perfect innings but was taken out of the game due to his pitch count, making his second start after returning from an oblique strain. Robin Buckson, Detroit News
Fullscreen

Tigers' Rajai Davis singles to lead off for the Tigers in the first inning. Davis went 2-for-5. Robin Buckson, Detroit News
Fullscreen

Tigers pitcher Buck Farmer, right, walks to the dugout after a 1-2-3 top of the sixth inning, the last out on a strikeout to Chicago's Tyler Saladino, left. Robin Buckson, Detroit News
Fullscreen

Tigers' J.D. Martinez hustles home to score on a single by James McCann to give the Tigers a 1-0 lead in the seventh inning. Robin Buckson, Detroit News
Fullscreen

Tigers' J.D. Martinez slides home to score while Chicago's Tyler Flowers applies the tag to give the Tigers a 1-0 lead in the seventh inning. Robin Buckson, Detroit News
Fullscreen

Tigers' J.D. Martinez slides home to score while Chicago's Tyler Flowers applies the tag to give the Tigers a 1-0 lead in the seventh inning. Robin Buckson, Detroit News
Fullscreen

Tigers' J.D. Martinez, right, is congratulated after he scores on a single by James McCann in the seventh inning. Robin Buckson, Detroit News
Fullscreen

Tigers' Miguel Cabrera, left, is congratulated for a tag on Chicago's Alexei Ramirez for the second out of the eighth inning. At right, Jose Iglesias, right, jokes around. Robin Buckson, Detroit News
Fullscreen

Chicago's Tyler Saladino slides into third on his triple in the ninth inning, the first White Sox hit of the game. Robin Buckson, Detroit News
Fullscreen

Tigers pitcher Neftali Feliz walks off the field after the top of the ninth after the White Sox tied the game. Robin Buckson, Detroit News
Fullscreen

Tigers' Rajai Davis starts to celebrate after his triple that scores Anthony Gose to win the game in the 10th inning. Robin Buckson, Detroit News
Fullscreen 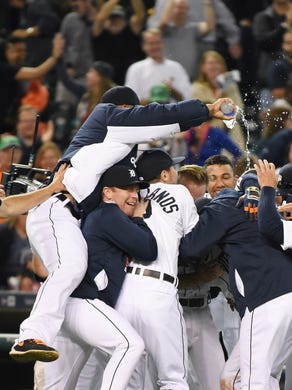 Tigers pitcher Daniel Norris watches with the game tied in the bottom of the ninth inning.(Photo: Robin Buckson, Detroit News)

Detroit  — On the day that Bruce Rondon was dismissed and sent home for the season for a lack of effort, rookie left-hander Daniel Norris threw five perfect innings in the Tigers 2-1 win over the White Sox.

The contrast couldn’t be any more stark. It looked like Norris’ season was over on Aug. 19 when he badly strained his oblique muscle. Norris, though, refused to buy into that timetable.

“A lot of guys could have very easily said, ‘You know what? I’m a prospect. I’m going to take it to the house. I hurt my oblique; I’m not going to risk anything,’” catcher James McCann said. “A lot of guys were kind of like, ‘Hey, take your time.’

Norris, the main prize for the Tigers in the David Price trade, has pitched 8⅔ innings since coming off the DL, and he’s allowed one hit — a home run to the Twins' Eddie Rosario.

“Really impressive,” Ian Kinsler said. “His fastball is electric and that makes his off-speed stuff that much better.”

He had a pitch ceiling of 65 pitches Tuesday and he used 63 to dispatch the 15 White Sox hitters he faced. He was fearless and hitting his spots with a fastball that ranged from 93-95 mph, and working in his firm change-up, slow change-up and curveball masterfully.

“Everything feeds off the fastball,” Norris said. “There will be days when you don’t have fastball command. Early on, I really didn’t have that.”

But he made a quick adjustment, stayed over the rubber longer on his delivery, and everything fell into place.

He struck out four, including Melky Cabrera twice. He fanned him in the second with two 76 mph curveballs. In the fifth, he blew two 95 mph fastballs by him.

Norris also got seven ground ball outs. Dixon Machado and Kinsler made strong plays on slow-rolling ground balls, and Ramirez lined out to J.D. Martinez in right. That may have been the only hard-hit ball off Norris.

“He’s been really good in both his outings,” McCann said. “His fastball is explosive. He established it in and his breaking ball has been extremely sharp since he’s come off the DL.”

Norris said the time off allowed him to recharge mentally more so than physically.

“The last few starts before the DL, my velocity was back,” he said. “As far as the rest, I don’t know if physically it made a huge difference. But mentally, yeah.”

He said he stayed up to the wee hours and watched every start that Clayton Kershaw and Price, two elite left-handers, made while he was out.

After brush with history, Tigers settle for walk-off win

“That’s something I can always be better at.”

Norris threw first-pitch strikes to nine of the 15 batters he faced. And he had no beef with Ausmus holding firm to his pitch limit.

Given Norris’ value to the Tigers as they retool for next season and beyond, it would have been foolhardy to let the 22-year-old continue beyond his limit in an otherwise meaningless September baseball game — as tempting as it may have been.

“I was prepared for it,” he said. “As far as when he told me I was coming out, there was no argument there. It was just really encouraging for me. I really want to finish the season strong.”