Harbaugh: UM punter strong enough to move on from blunder

Blake O'Neill, who fumbled the low snap that resulted in MSU's game-winning touchdown, is resilient and will bounce back, Michigan coach says.

Harbaugh: UM punter strong enough to move on from blunder 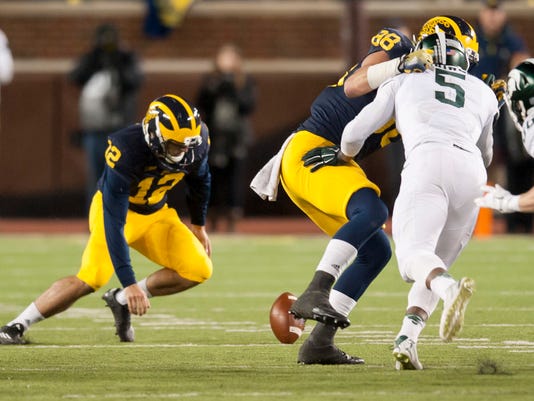 Michigan punter Blake O'Neill bobbles a low snap before fumbling it on the last play of the game.(Photo: David Guralnick, Detroit News)

Ann Arbor — Michigan coach Jim Harbaugh said it already is evident punter Blake O'Neill has taken the end of the Michigan State game in stride and will emerge stronger.

With 10 seconds left in the in-state rivalry game last Saturday at Michigan Stadium, O'Neill took a low snap from Scott Sypniewski, dropped it, picked it up and spun around to kick it but fumbled into the hands of Michigan State's Jalen Watts-Jackson. Watts-Jackson scored on a 38-yard return giving the Spartans a stunning 27-23 victory.

"I talked to him, and I've been talking to him," Harbaugh told a small group of reporters after his weekly radio show appearance at The Pizza House, in which he entered to a standing ovation from Michigan fans. "What's been confirmed, is (he's) a strong individual. Strong individual of character.

"I believe he's going to handle it, and he is. I think he's gonna handle it as well or better than anybody we've seen in this position. It's never one play in a football game that determines a football game. Never seen it. Didn't happen in this game and don't ever think I will see it."

Harbaugh said the team will not crumble after the loss. The Wolverines are off on Saturday and next play at Minnesota on Oct. 31. They will practice Tuesday, Wednesday and Sunday this week.

He made clear he takes literally the use of "heartbreak" in the aftermath of the loss and said nothing could be further from what the players experienced.

"It's not a devastation, it's not heartbreak, it's not even defeated," Harbaugh said Monday night. "We are going to learn from it and forge on. To be heartbroken or devastated, that would mean the end. Sad about losing the game. Not going to let sadness stand in the way of us improving."

Certainly, Harbaugh understands that the final play has been diagnosed and reviewed since the game's conclusion. When O'Neill and the Wolverines lined up for the punt, two gunners were on either side of the formation with five on the line of scrimmage. Michigan State had 10 on the line and they rushed.

Harbaugh said the gunners were lined up where they were supposed to be. He was asked if Sypniewski was hit too early.

"I don't have any feeling about that," he said. "We didn't execute the catch and the punt. I don't know how much more to analyze it any more than that."

The Wolverines will return for practice on Tuesday.

"We'll handle it, I'm confident of that," Harbaugh said. "You look at the ways to build on the things we're doing to put ourselves in a position to win the football game and the other things that put us in the position where we didn't and where we can improve and ways to get better from. I feel like that's our football team, It's been improving every week. We're going to continue along that track."

Tailback Drake Johnson was limited in the Big Ten home opener against Northwestern and was in uniform for MSU but didn't play.

He anticipates Johnson will be ready for the Minnesota game.

"He's had something that's limited him he's been working through," Harbaugh said. "Believe he'll be full strength."

Much has been made of the fact Harbaugh and Michigan State coach Mark Dantonio did not have the customary handshake after the game. Dantonio was with his injured player in the end zone and explained Monday he was "caught up in the moment."

"I understand," Harbaugh said Monday. "The circumstances of the situation."

Harbaugh said he had discussions with the Big Ten office about the officiating in last Saturday's game. Linebacker Joe Bolden was ejected from the game for targeting.

"Those are discussions are between me and the officials," Harbaugh said. "It's a learning experience, too, that's all I'll say about that."

According to a Big Ten spokesman, coaches submit plays for review after every game as part of the Big Ten's officiating review program. Bill Carollo, head of officials, then discusses the submitted plays with the head coach.

"But those conversations are part of our internal review process only," he said.