With eight passes of 20-plus yards, the Lions offense exploded for a season-high 546 yards in the 37-34 overtime win at Ford Field.

Lance Moore hangs on to a first-down reception in front of the Bears' Kyle Fuller on the overtime game-winning drive.(Photo: Daniel Mears, Detroit News)

After having just 15 pass plays of 20-plus yards in the first five games, the Lions offense finally produced consistent big gains in Sunday’s win over the Bears.

With eight passes of 20-plus yards, the Lions offense exploded for a season-high 546 yards in the 37-34 overtime win at Ford Field.

And based on the coaches film from NFL Game Pass, it took a team effort to create the big plays that helped the Lions end their losing streak to open the season, providing some evidence that a lack of execution indeed led to the lack of deep plays during the 0-5 start. The Lions also showed they can create key plays out of play-action.

Wide receivers Calvin Johnson and Lance Moore had three 20-plus yard plays each in the game, and running back Theo Riddick and Golden Tate added one apiece. But, on most of those plays, good blocking and great passes from quarterback Matthew Stafford helped give the skill-position players opportunities to make the big gains.

The Lions also benefited from a conservative Bears defense that rushed more than four players on just one of the eight long plays when Chicago sent five.

The first long play started with play action to running back Zach Zenner, but after Stafford faked the handoff to his right, he looked left and saw Tate open while running a crossing pattern about 7 yards deep. Tate was open with ease as cornerback Kyle Fuller gave him significant cushion.

Then, after Tate made the catch, he made some of the tremendous run-after-catch moves that he’s done his whole career. First, he made Fuller miss a tackle, and when Tate was on the sideline, he juked safety Adrian Amos so hard that Tate needed to put his hand down to maintain his balance before gaining an extra 10 yards for a 22-yard play.

Later on that opening drive, Stafford hit Moore for a 20-yard touchdown. The offensive line, with help from a chip by tight end Tim Wright, provided a perfect pocket for Stafford who rewarded Moore for running a smooth route in which he ran deep but faked breaking outside before leaning back inside.

Moore’s route helped him gain a step of separation against slot cornerback Sherrick McManis, and with the safeties looking at Johnson and Tate on the outside, Stafford threw a perfect pass to Moore as he crossed the goal line.

In the second quarter, Johnson created a big play on a crossing route as Tate did. The Bears were playing zone defense, and Johnson’s 13-yard route allowed him to be open in the middle of the field where he caught the pass in stride, made safety Harold Jones-Quartey miss and ran for a 43-yard gain.

Johnson’s first long gain looked like a run formation as the Lions had an extra tackle and a tight end on the field. Stafford did a minor play-action fake, and running back Ameer Abdullah chipped linebacker Lamarr Houston to give him some extra time.

Later in the quarter, Johnson gained 39 yards on a more traditional deep play, making a one-on-one sideline catch against cornerback Tracy Porter, but Stafford played a big role in creating the opportunity. The Bears showed five rushers, and even though they only sent four, Stafford saw that and made a pre-snap adjustment.

Then, Stafford started the play looking to his left to hold the safety in the middle of the field before launching the pass to Johnson.

In the third quarter, play action worked again as, with an extra tackle in, Stafford faked a handoff to Riddick. Tate and Moore effectively ran the same routes and crossed in the middle of the field after about 14 yards where Fuller and McManis ran into each other. Tate was open, too, but with Stafford scrambling to his right after a little pressure, he hit Moore, who gained 42 yards. 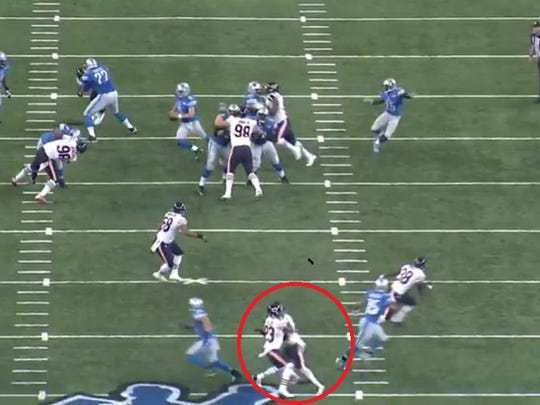 Riddick’s 34-yard gain on the late fourth-quarter touchdown drive was another example of his agility, and he used an official to help him juke linebacker Jonathan Anderson after a short curl. Then, Tate threw a huge block and Riddick made a couple other defenders miss.

On the next play, Stafford and Moore connected for 26 yards as Moore made a contested catch. But, Tate running a screen helped draw in McManis for a moment, and as soon as he stepped forward, Stafford threw to Moore. Abdullah had a key block on Anderson as the Bears sent five rushers.

The final deep play, of course, set up the game-winning field goal in overtime, and it was play-action again. After faking the handoffs to Wright and Abdullah, Stafford rolled to the right. Wright struggled blocking linebacker Willie Young, forcing Stafford to scramble to the sideline.

But as Stafford ran, Fuller handed off coverage of Johnson to Jones-Quartey to keep an eye on Tate. Stafford saw Johnson one-on-one with a safety, and even though the ball was slightly underthrown, Johnson adjusted for the 57-yard gain.