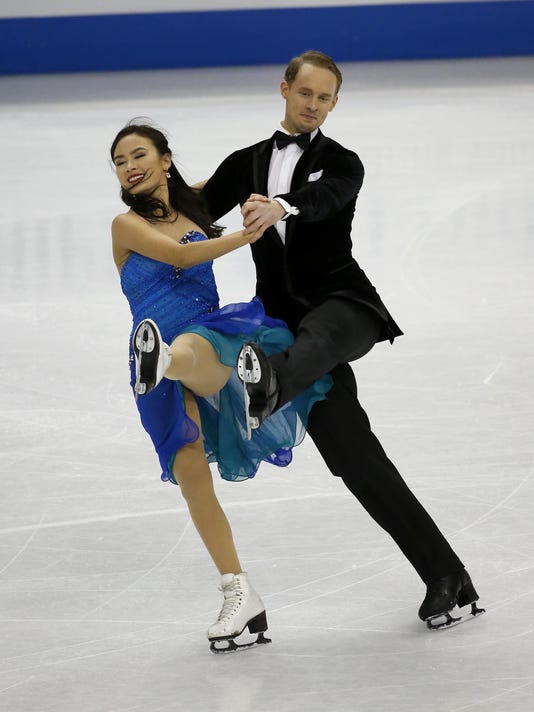 The Shibutanis overtook defending champs Madison Chock and Evan Bates of Ann Arbor with a rousing free dance. They trailed by .47 points after the short dance but earned a standing ovation for their program Saturday to “Fix You” by Coldplay. They received 115.47 points for 190.14 total.

Chock and Bates had 111.79 points for their free dance for a total of 186.93. Madison Hubbell and Zachary Donohue were third for the second straight year.

The Shibutanis won a world bronze medal in 2011 but had been unable to match that level of result since.

“It’s all been building to this point,” Alex said.

It has been a trying season for Chock and Bates, the 2015 world silver medalists, who have repeatedly changed their programs to try to contend in the biggest international competitions.

Kayne and Danny O’Shea took the ice last, just needing to skate cleanly. Cautious but calm, they did what their rivals couldn’t and clinched a lopsided win with a record score.

They earned 142.04 points for the long program for 211.65 total, the highest mark ever at nationals, to beat defending champs Alexa Scimeca and Christopher Knierim.

Kayne and O’Shea led after the short program, and when Scimeca and Knierim made several mistakes, the title was there for the taking.

Skating to “The Music of the Night” from “The Phantom of the Opera,” Kayne and O’Shea had the day’s only clean program among the contenders.

Knierim fell on their side-by-side triple toe loops, and Scimeca had two feet down on one throw jump and both hands down on the other. They scored 129.45 points in the free skate for 196.80 total.

Marissa Castelli, who won two U.S. titles with former partner Simon Shnapir, was third with Mervin Tran with 179.04 points. The Americans have two spots at the world championships.

Kayne had hip surgery in July 2014, and she and O’Shea had to take off that Grand Prix season. They still managed to finish third at last year’s U.S. Championships, missing out on a spot at worlds.

Kayne recalled that on the day of her surgery, O’Shea told her: “We are one day closer to a clean program.” It came on the biggest day of their careers Saturday. When the scores were announced, Kayne burst into tears, and O’Shea alertly reached over to hand her a box of tissues.

The two have been skating together for under four years, an eternity for American pairs skating. Earlier this season, Scimeca and Knierim became the first U.S. pairs team to qualify for the Grand Prix Final since 2007, offering hope that the fortunes of American pairs skating might finally be reversing.

They struggled there, though, and again at nationals. Scimeca and Knierim completed their signature quadruple twist to open the program, but then the mistakes started coming.